Print a pdf of this cruise
This magical Hebridean cruise (10 nights) wanders through the Scottish isles of the Inner and Outer Hebrides visiting the famous Small Isles (Muck, Eigg, Rum and Canna), Isle of Skye and remote Shiant Isles. They are all part of a kaleidoscope of islands scenery: the soft white sandy beaches with turquoise waters of the Outer Hebrides, steep sea cliffs with nesting seabirds and soaring eagles, to the ragged Scottish Highland mountains. The Outer Hebrides are composed of some 200 islands with evocative names such as Mingulay, Barra, South Uist, Benbecula and Taranay and is one of the world’s remotest and beautiful cruising areas. The Shiants are home to thousands of seabirds with a puffin population of over a quarter of a million! Our stops on the North West of Scotland is dominated by high mountains and remote sea lochs yet we still have time to anchor off the picturesque Highland village of Plockton.

Please note that your voyage is weather dependent. Weather doesn't just mean good or bad weather. There are many considerations such as tidal gates, wind direction and strength, the strength and direction of currents, overfalls, and fetch. Depending upon the weather and nature’s conditions, wildlife viewing varies.

• Be Amazed by Plockton.

Tobermory: One of the most picturesque towns in the Western Isles. If you wish, we can make time to visit the local distillery or visit eagles. Canna, the Small Isles: We can set sail for the scenic anchorage at Canna and its neighbouring Sanday. There are seabirds galore on the island's high sea cliffs - puffins, shags, razorbills, black guillemots, Manx shearwaters - and breeding there, in the high crags, are sea eagles. There are two lovely beaches, three churches, a tiny ruined castle and a population of less than 20! A short climb up Compass Hill gives wonderful views of Isle of Skye and our destination, the islands of the Outer Hebrides. Loch Dunvegan, Isle of Skye: With famous Dunvegan Castle built on a high rock overlooking the Loch which was the site of an old Norse fort. The castle has been home to the chief of the Clan MacLeod for hundreds of years. Castlebay, Barra: We can anchor at the village of Castlebay on the island of Barra of the Outer Hebrides. Castlebay was where much of the film Whisky Galore was made about the WW II stranding of the S.S. Politician in Eriskay Sound with her cargo of 260,00 whisky bottles! Castlebay was once an important herring curing station and near our anchorage, surrounded by water, is Kisimul Castle, the ancient seat of the MacNeils of Barra. Lochboisdale, South Uist: We can explore the incredible endless beaches and flower-rich Machair of the islands of South Uist and then Benbecula and North Uist. Lochmaddy: Situated on North Uist, Lochmaddy is the island’s main village. The village was probably settled by the Norse and at one time was a base for seventeenth century pirates! Harris, East Loch Tarbet/Scalpay: This is an island-studded, wide sea loch in the Isle of Harris that makes an interesting overnight anchorage. There is a possible anchorage off the scenic isle of Scalpay which is joined to Harris by a bridge. Shiant Isles: The so called ‘enchanted’ or ‘holy isles’ in Gaelic, they live up to their name. Situated between Lewis and Harris and northern Skye they are a haven for birdlife. They were once owned by Compton Mackenzie who wrote the famous novel Whisky Galore. Loch Torridon: This loch takes us deep into the breath-taking mountain scenery of North West Scotland. Plockton: A most picturesque Scottish Highland village with a natural harbour and wonderful views of Loch Carron. This picture postcard village was famously part of the Hamish Macbeth TV series. Loch Nevis via east coast of Skye: Another spectacular sea loch that runs inland from the Sound of Sleat. Surrounded by mountains and is one of the remotest sea lochs in Scotland. On the way we can plan to visit Torabhaig Distillery or Armadale castle and gardens on the east coast of Skye. Loch Drumbuie: Just south of Oronsay island, another Inner Hebridean island, lies secluded Loch Drumbuie. A squeeze between high sided cliffs and we are in a perfectly sheltered anchorage. We can spend a tranquil night here.

£2,565 GBP pp
two single cabins (with washbasin). All cabin linen and towels are supplied including towelling dressing gowns for the cabins with no en-suite.

£2,745 GBP pp
two twin semi-ensuites (with toilet and washbasin). All cabin linen and towels are supplied including towelling dressing gowns for the cabins with no en-suite.

£2,925 GBP pp
There are two double/twin en-suites (with shower, toilet and wasbashin). All cabin linen and towels are supplied including towelling dressing gowns for the cabins with no en-suite.

£2,925 GBP pp
one double/single cabin with a 105 cm wide bed (with washbasin). All cabin linen and towels are supplied.

Seahorse II (82 feet long and a beamy 23 feet)  was built to the highest standard for the Norwegian fjords and life in the high northern latitudes. A 10mm Swedish steel hull, air conditioned and heated throughout, and winter sailing for the British Royal Navy for months at a time in the western approaches means that this wee cruise ship is more than enough for these summer adventures in the Gulf Stream warmed waters of the west coast of Scotland. Powerful enough to cruise the many spectacular islands and lochs of the Inner Hebrides and Outer Hebrides, yet small enough to anchor in remote and hauntingly beautiful places that the larger passenger ships are unable to visit. With a maximum speed of 11 knots (from a 350 hp Volvo diesel) Seahorse II is a sturdy, go-anywhere, yet comfortable adventurer.

Accommodation Seahorse II takes a maximum of eleven guests. There are two NEW double (or twin) en-suites and two twins, three single cabins, one with a 105 cm wide bed, all temperature controlled and with washbasin. All cabin linen and towels are supplied including luxurious towelling dressing gowns for the cabins with no en-suite. There is a wonderful deck saloon where we dine and view the spectacular Hebridean wildlife. A bridge full of the best navigational aids, a high foredeck for wildlife spotting and a boat deck for lounging, she is the perfect vessel for your life afloat. On the spacious aft deck (ideal for alfresco dining when the boat is at anchor or under way) we have a powerful little crane for launching Seahorse's two dinghies, two sea kayaks and paddle board. Here there is also plenty of room for your windsurf and kitesurf gears, diving gear, sailing dinghies and anything else you need for a great Scottish sea adventure.

Your Crew  You will have a crew of three taking you on your Scottish mini cruise. Your professional skipper is passionate about boats, sailing, and the natural environment of the islands and sea lochs of the Hebrides and Argyll. He is more than happy to share his knowledge of the area to those on board while ensuring his shipmates have as much fun as possible. You will have your own on board chef who provides wonderful meals, locally-sourced and freshly prepared from the galley and a bosun/crewmember who will be there to provide assistance whenever you will need it. 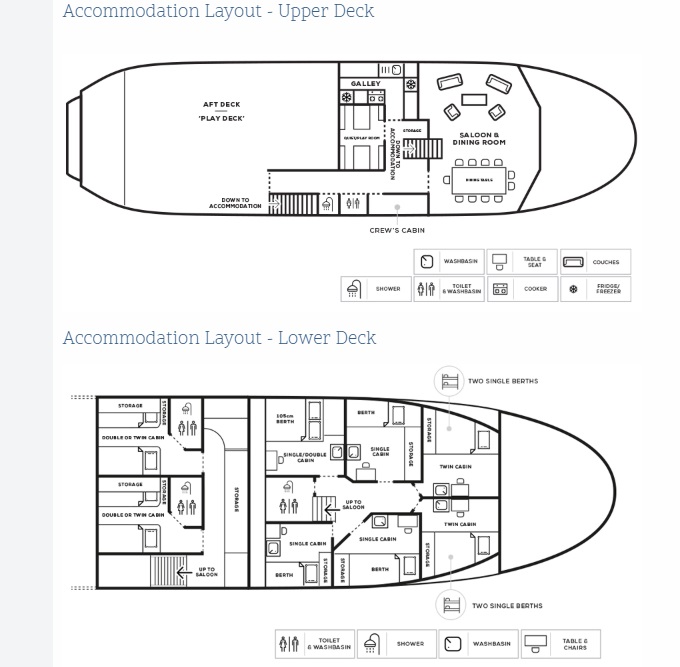 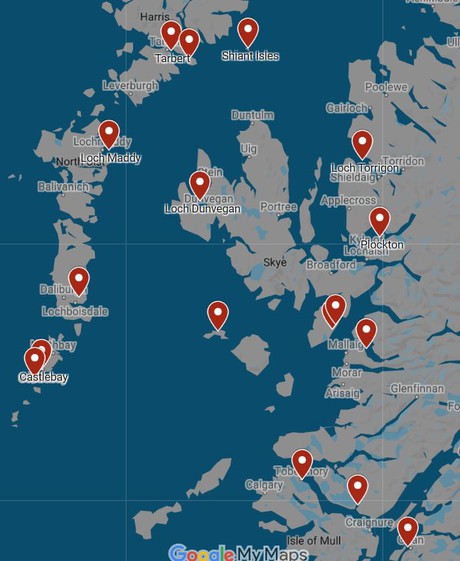