The new mini cruise ship is a historic, converted cruising lifeboat that once roamed the Western Approaches and was involved in the storm of the ill-fated 1979 Fastnet Race. Gemini Explorer was built in 1974 in Bideford Shipyard as the City of Bristol (70-003), one of three, Clyde class, cruising lifeboats with an extended offshore range of 1700 miles. She is powered by two powerful Gardner diesel engines and she will achieve speeds of up to twelve knots. The Gemini Explorer entered service at the Clovelly Lifeboat Station on the North Devonshire coast and, after saving 44 lives, was finally retired in 1989.

Since then, after extensive re-fits and modifications (including a new galley, high bulwarks, viewing top deck, en-suite accommodation and a well lit saloon), she has been converted to a mini cruise ship and today sails as the Gemini Explorer. However, there are parts of the insides of the vessel that have been kept in their original state to give an exciting insight in to role she once played as a cruising lifeboat.

As a mini cruise ship she has voyaged as far away as Greenland and, for the last 10 years, sailed as a charter vessel on the east coast of Scotland. In 2020 after a further refit and upgrade she will be sailing the beautiful islands and sea lochs of Scotland’s west coast as part of St Hilda Sea Adventures little fleet.

The deck saloon is where everyone dines and socialises and where everyone enjoys a convivial atmosphere that is encouraged by shipboard life aboard this ex-cruising lifeboat.
Cabins are warm and comfortable with eight berths for our guests. In the forward part of the vessel there is a double en-suite, a twin en-suite and single en-suite. In the aft part of the vessel there is a cabin which has a one double bed and two single berths. We are happy to offer this cabin to two guests only, without supplement. This aft cabin shares the bathroom with the two crew.
All en-suites and the bathroom have a washbasin, toilet and shower. All cabin linen and towels are supplied.
There is an upper viewing deck complete with teak benches and perfect for spotting wildlife and relaxing. You also have some deck space to embark your own equipment such as kayaks and paddleboards. You will also be able to use the onboard two person sea kayak. 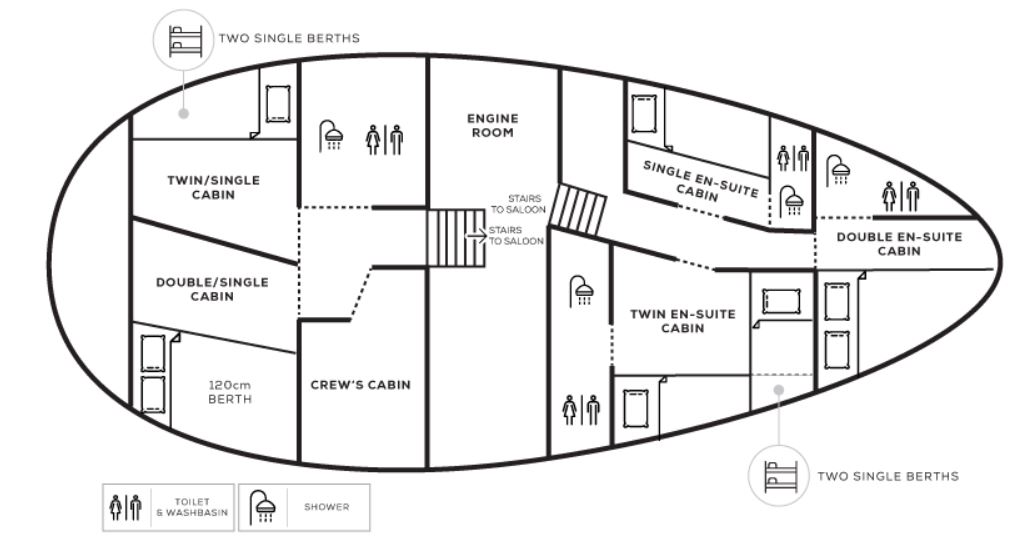 Travel along these world famous Sounds that separate some of the most famous islands of the Inner ...

Enjoy an extraordinary voyage of seven nights exploring the Sound of Mull and the Small Isles. The ...

The Isle of Mull is the heart of the Inner Hebrides and this is a magical Scottish ...

A mini cruise around the sea lochs of the Isle of Skye and the Small Isles (Muck, ...

This Outer Hebridean (10 night) cruise will, if the weather is kind, give us time to explore ...

This wonderful, 11 or 12 day, Outer Hebridean cruise will, if the weather is kind, give us ...