Through the Heart of Japan

Print a pdf of this cruise
Experience the dynamic landscape of Japan, from the vibrant cities of the mainland to quiet coastal island villages. Departing Tokyo, begin your journey by experiencing traditional Japanese culture at the township of remote Shimizu and walking the cobblestone staircase leading to the sacred kamikura shrine at Shingu. Continue to the ideal vantage point of Kobe port to explore the bustling streets of Osaka for an authentic food tour or spend time at Kyoto amongst the diverse cityscape of modern architecture and ancient temples.

Discover the lush mountainous landscape of Iya Valley at remote Tokujima, learn about the traditional history of the soy sauce craft in Shodojima and explore the ancient castle at little-visited Karatsu. Visit Jeju Island in South Korea to view the extraordinary UNESCO listed Manjanggul lava tubes before discovering the little-known Goto Islands and concluding your journey in Fukuoka.

Be immersed in the poignant histories and ancient traditions within these diverse landscapes on this authentic journey through the heart of Japan.

• Visit Osaka, the food capital of Japan, or the historic city of Kyoto where traditional and modern architecture collide

• Visit Matsuyama Castle that sits atop Mount Katsuyama, one of Japan’s twelve original castles constructed in the early 1600s

Board the Coral Adventurer from Tokyo Bay at 4:00pm for a 7:00pm departure. Settle into your cabin and relax as we set sail towards the Sea of Japan. This evening, join the Captain’s welcome drinks and meet your crew and fellow guests as the sun sets.

Shimizu, translating to ‘pure water’ in Japanese is one of Japan’s most scenic ports with unparalleled views of Mt. Fuji. With a mild climate, the area is home to rich tea plantations located on the Nihondiara Plateau. Visit the famous tea plantations, explore the historic township with a bustling seafood market and museum, discover the photogenic miho-no-matsubara pine grove and take to a hiking trail to enjoy rustic ropeways.

Translating to ‘new shine’, Shingu is home to the sacred kamikura shrine located atop a hill. The area also hosts a stunning part of the Kumano River, Dorokyo Gorge, and pilgrimage routes to the UNESCO World Heritage Site of Kii Mountain Range. Climb the 538 steps to the shine to see gotobiki iwa – the holy rock and picturesque scenery from this elevated viewpoint. Explore the city centre to connect with the food, culture and history of the area and set off on the daimonzaka trail – an impressive cobblestone staircase that leads from the valley up to the temples.

Today, you may choose to explore Osaka or Kyoto for the day. Time permitting, we may travel by bullet train. Immersive yourself in colourful, bustling Osaka, the food capital of Japan, where ancient and modern architecture collide. Visit Osaka Castle, join a guided tour of famous Dotonburi Street, stroll through Kuromon Market and take it all in from the observation deck in Umeda Sky Building. Kyoto city, once the capital of Japan, is famous for its classical Buddhist temples, gardens, imperial palaces, Shinto shrines and traditional wooden houses. Learn of the rich history of this area as we visit these places as well as local street market, Nishiki Market, well-known for its fantastic takeaway food.

The Iya Valley is a remote, mountainous valley with dramatic steep-sided mountain slopes strung with suspension bridges constructed from mountain vines known as kazurabashi. These vine bridges were once the only means for moving people and goods through the challenging terrain with the Wild Monkey Bridge open to visitors who can pull themselves across the river in a wooden cart suspended on a rope. We take a sightseeing boat cruise through the Oboke Gorge, admire artworks and artefacts at the Otsuka Museum of Art, visit a Buddhist temple and experience an Awa Dance performance, which is celebrated annually at a festival dedicated to this dance style.

One of the first islands born to the Gods in the creation myth of Japan, Shodojima literally means ‘small bean island’, a fitting name for an island where traditionally soybean crops were processed into soy sauce, though is better known more recently for its olive plantations. Learn about this time-honoured condiment with a 400-year-old history at the Marukin Soy Sauce Historical Museum. Experience the making of the Japanese famous Somen noodle and try your hand at dividing the noodles with long chopsticks. Visit Misaki no Bunyojyo, the elementary school featured in the famous film Twenty Four Eyes.

The famed Itsukujima shrine is one of Japan’s most recognisable symbols with its shinto shrine and red torii gate seemingly floating upon the Seto Inland Sea. Itsukujima Shrine is a UNESCO World Heritage Site and a National Treasure. Other important sites are Daisho-in, a temple of Shingon Buddhism and Reikado Hall, located on Mt Misen, the highest peak on Miyajima. Walking paths link Miyajima’s cultural sites and Maple Valley, providing the ideal pace with which to absorb centuries-old customs. Stroll around the island, amongst the deer that wander the same sites, and take in the beauty of the island.

Forever linked to the WWII tragedy that saw an atomic bomb dropped on the city in 1945, Hiroshima has since been rebuilt while retaining some historical heritage, with the Peace Memorial Park now the city’s most prominent feature. Shukkeien Garden dates as far back as the 1600’s with its valleys, mountains and forests represented in miniature with tea houses amongst the gardens an ideal spot to take time to enjoy the idyllic surrounds.

High on Mount Katsuyama, Matsuyama Castle is one of Japan’s twelve original castles and stands at the heart of the city of Matsuyama. Constructed in the early 1600’s, the original tower collapsed after being struck by lightning. A three-story tower was added to the site two hundred years after. Pilgrims dressed all in white are a frequent site at Ishitji Temple, where an inner temple connects to the main temple grounds via a dimly cave and 200m long tunnel that houses Buddhist statues, carvings and drawings.

This trading hub is known for its safe harbour and close proximity to other foreign trading ports. Here we will explore the island’s many idyllic surrounds including the Nanatsugama limestone caves, the bustling city area and markets, climbing to historic Karatsu Castle and one of Japan’s top waterfalls, Mikaeri Falls.

Roughly halfway between the Japanese mainland and the Korean Peninsula, Tsujima was once a single island before a canal divided the island in two in the 1600’s, then into three islands in the 1900’s with a second canal constructed. Though in reality there are approx. 100 islands that collectively make up Tsujima with its abundance of natural beauty and untouched forests. Birdwatching is a popular pastime, particularly within the Tsuhjima Wildlife Conservation Centre, home to the Tsushima Leopard Cat, an endangered species. The perfect place for true explorers, take a tour of the area and visit an observation deck for breathtaking views and chances to spot some of the diverse native flora and fauna.

Jeju Island’s Manjanggul lava tubes are regarded as the finest lava tube system of caves anywhere in the world and are recognised by UNESCO as a Global Geopark site for their unique geological features and volcanic landforms. The Jeonbang Falls is Korea’s only waterfall that tumbles directly into the sea, while Seongsan Ilchulbong Peak is a flat-topped crater that rose from the sea many years ago. The near-circular crater is popular for its walking trails and elevated position to view the sunrise or sunset.

With a WWII history, the Maritime Self-Defence Force Sasebo Museum displays historical naval vessels alongside the Former Sasebo Navy Club which dates back to the late 1800’s. At Mukyudo, an air raid shelter is unique amongst Japan’s countless shelters as it was built by school children in the style of a school. The historical pottery town of Arita is where Japan’s fine porcelain was first produced around 400 years ago. Arita-yaki pottery is now the most highly regarded pottery across all Japan with its ‘secret ingredient’ kaolin the essential mineral required to make fine porcelain. We try our hand at pottery making with an opportunity to make our very own Arita ceramics.

The Goto Islands are best known for Christianity, while religion was banned, the ‘hidden Christians’ settled here and continued practicing their faith in secret until the ban was lifted in the 1870s. Goto Island translates into English as the ‘five island chain’, with Nakadori and Aokata Islands being two of the most populated. With around 50 churches dotted across the prefecture, such as the UNESCO World Heritage-listed Kashiragajima Church with its stone construction, other interesting sites we will visit include the Whale Museum and the Stone Monuments of Wakamatsu Island.

Also a member of the Goto Islands, Fukue Island is the largest of the group with hilly terrain, temples and churches. Be welcomed into port with wind instruments and a traditional drum performance. Hike Mt. Onidake, the dormant volcano, learn of the area’s history on a visit to the city museum, cruise Abunze coast to view the lava rock formations and soak in the natural beauty of the island with its beaches, mountains and craggy coastline.

Our voyage ends in the Japanese port of Fukuoka. Disembark Coral Adventurer at 8:30 am and bid farewell to new-found friends, the Master and crew. Fukuoka has great shopping, some of the best cuisine and accessibility to nature nearby,

This itinerary is an indication of the destinations we visit and activities on offer. Throughout the expedition we may make changes to the itinerary as necessary to maximise your expeditionary experience. Allowances may be made for seasonal variations, weather, tidal conditions, and any other event that may affect the operation of the vessel. Coral Expeditions suggests that you do not arrive on the day of embarkation or depart on the day of disembarkation due to any changes that may occur in scheduling. 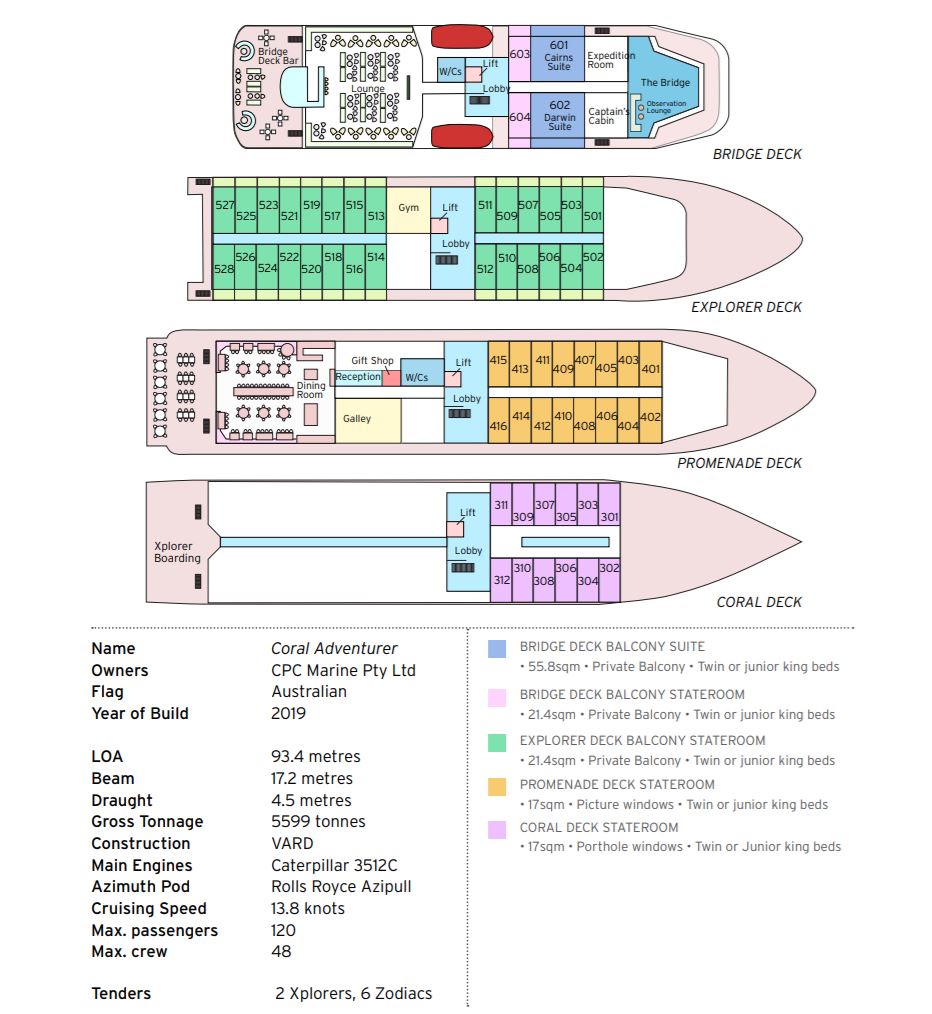 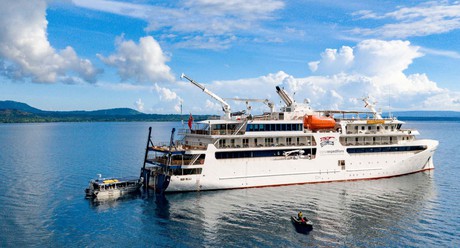