Print a pdf of this cruise
The Complete WESTERN PACIFIC ODYSSEY RETURNS - Including Bonin Islands!!

Known in birding circles simply as the 'WPO', this expedition incorporates many of the key birding areas in the South West Pacific. First offered in 2007, it is now considered one of the 'must do' expeditions for any birder because of its opportunities to see some of the rarest pelagic seabirds in the world, plus many island endemics. But it is not just for 'birders'. The cetacean list can only be described as outstanding. And if you ever tire of birding or cetacean watching then there are options for snorkelling, swimming and relaxing.

After departing the Port of Tauranga in New Zealand, we sail for the rich waters of the Hauraki Gulf where there are numerous speciality seabirds, including the recently discovered New Zealand Storm-petrel. From there it's northward to Norfolk Island. Next stop is New Caledonia where we search for the amazing Kagu and other endemic bird species in the Parc Provincial de la Rivière Bleue.

We then spend six exciting days in the Solomon Islands birding on Nendö, Santa Ana, Makira, Guadalcanal (Mt Austin), Tetepare and Kolombangara, before cruising across the New Britain Trench, an area known to be extremely rich in cetaceans. As we sail along the coasts of Bougainville and New Ireland, we will look for two rarely seen seabirds: Heinroth's Shearwater and the critically endangered Beck's Petrel which was only rediscovered in 2007, both of which we have seen on almost all our previous expeditions in this region.

Next stop is Truk Island (Federated States of Micronesia) for some more intensive birding. We will then set a course for the Bonin Islands south of Japan; our route will take us to Chichi-jima, the largest island in the archipelago. We will then continue north to Torishima Island (where we hope to get great views of the Short-tailed Albatross) before we arrive at our last island destination of the voyage, Hachijō-jima, where we will look for the last specialities of the expedition. Our voyage will then conclude at the Port of Yokohama in Japan.

This expedition is accompanied by some of the best pelagic birding guides in the world who have extensive experience of the seabirds of the West Pacific and have visited the islands we will be landing on multiple times. Birding starts at dawn and finishes at sundown. Our guides are there throughout the day to assist you and the 'reading of the bird list' each evening is legendary for its detail and discussion. This is one expedition you can't afford to miss.

A message for the keen birders and cetacean watchers reading this. Space doesn't allow us to list all species on a day-by-day basis in this itinerary. Please ask for an expedition dossier or a bird and mammal list from previous expeditions.

Arrive in Tauranga and transfer to the ship. Settle into your cabin and join your expedition team and captain for a welcome on board.

Our seabirding will start in the Hauraki Gulf where we will look for the critically endangered New Zealand Storm-Petrel as well as Little Penguin, Grey Ternlet, Buller’s, Fluttering and Little Shearwaters and Grey-faced and Black Petrels.

En route to Norfolk Island, we have a good chance of finding Gould’s, Black-winged, Kermadec, White-necked and Grey-faced Petrels, plus Wedge-tailed and Short-tailed Shearwaters.

At sea on a northward course, we cross a large underwater seamount, a productive area for seabirds including Tahiti, Collared, White-necked, Providence and Kermadec Petrels.

We visit the Parc de la Rivière Bleue National Park where we will search for the endemics including the incomparable Kagu and highly range-restricted Crow Honeyeater. Other birds could include New Caledonian Goshawk, Horned and New Caledonian Parakeets, New Caledonian Imperial Pigeon, Southern Melanesian and New Caledonian Cuckoo-shrikes, Yellow-bellied Robin and Red-throated Parrotfinch.

Day 8: New Caledonia and At Sea

This morning on the forested slopes of Mount Koghi we will be looking for New Caledonian Goshawk, South Melanesian Cuckooshrike, Streaked Fantail, Southern Shrikebill, New Caledonian Crow and New Caledonian Grassbird. We then plan to sail around the southern tip of New Caledonia looking for the New Caledonian Storm-petrel. This intriguing bird was first found on the WPO expedition in 2008 and has been seen several times since. Although seemingly closely related to New Zealand Storm-petrel, there are a number of important differences and it is now considered a long-lost species collected in Samoa more than 200 years ago, and not seen since!

The largest of the Santa Cruz Islands, Nendö has several localised endemics, during our time ashore we hope to find Temotu Whistler, Sanford’s White-eye and Santa Cruz White-eye. Other possibilities include Red-bellied Fruit-dove, Pacific Imperial-pigeon and Cardinal Myzomela.

Santa Ana is one of the most easterly of the main islands in the Solomon Islands archipelago and has a distinctive avifauna. We can expect birds such as Silver-capped Fruit-dove mixed with Makiran endemics. Santa Ana is home to an endemic and highly distinctive subspecies of Rufous Fantail, and we will also be looking for Sanford’s (Solomon) Sea-eagle and Oriole Whistler.

Anuta is a small inshore island on the western side of Makira Island. Birding treasures that we can expect to see including the White-headed Fruit-dove, Chestnut-bellied Imperial pigeon, Makira Honeyeater (San Cristobal Melidectes), San Cristobal Starling, Makira Flycatcher, Makira Cicadabird, White-collared Monarch, Sooty Myzomela and Mottled Flowerpecker. Other species could include Red-knobbed and Island Imperial-pigeon, Brahminy Kite, Pied Goshawk and Pacific Baza. We will also enjoy the local hospitality.

We will anchor off Honiara and depart before dawn for Mount Austin. The birding here is exceptional and the specialities we could see include Ultramarine Kingfisher, Solomons Cuckooshrike, Chestnut-bellied Monarch, Steel-blue Flycatcher, Midget Flowerpecker, Brown-winged Starling and Black-headed Myzomela. There should also be numbers of parrots and pigeons, including the Yellow-bibbed Lory, Ducorps’ Cockatoo and Red-knobbed Imperial-pigeon.

Tetepare is a community run reserve located in the New Georgia islands. There are a number of new Solomon endemics to look for here including the highly localised Dark-eyed White-eye. Other possibilities include Melanesian Scrubfowl, Claret-breasted Fruit-dove, Island Imperial-pigeon, Buff-headed Coucal, Crimson-rumped Myzomela, Cockerell’s Fantail and Kolombangara Monarch. If we are extremely fortunate, both Nicobar Pigeon and Solomons Nightjar may be seen.

We intend to head into the hills to visit the Imbu Rano Conservation Area to explore dense upland forest. We hope to see the spectacular Sanford’s (Solomon) Sea-eagle, Cardinal, Duchess and Meek’s Lorikeets, White-capped Monarch, Crimson-rumped Myzomela, Ducorps’ Cockatoo and Metallic and Singing Starling. We may also look for the elusive Roviana Rail as we leave the reserve and will be scanning the cetacean-rich seas for whales and dolphins. Birders will also want to keep a lookout for Heinroth’s Shearwater.

Day 17: Off the coast of Bougainville

Today we are at sea off Bougainville and hope to see Heinroth’s Shearwater. These waters are also great for cetaceans including Sperm Whale, False Killer Whale and Fraser’s Dolphin.

Day 18: Off the coast of New Ireland

Today we cruise along the coast of New Ireland, where our target is the critically endangered and poorly known Beck’s Petrel with an additional chance for spotting the Heinroth’s Shearwater. Cetaceans to look for include Melon-headed Whale, Dwarf and Pygmy Sperm Whales and Orca.

Crossing the Equator we will be on the lookout for the following species: Bulwer’s Petrel, Tropical Shearwater, White-tailed Tropicbird and the Sooty Tern.

The birding can be quiet but as we head northwards, new species could include Matsudaira’s Storm-petrel, Bonin Petrel as well as Bannerman’s and Christmas Shearwaters. As we approach the Bonin Islands, we stand a good chance of finding Humpback Whales.

After clearing into Japan at the largest of the Bonin Islands, Chichi-jima, we will looking for Japanese Bush Warbler, Blue Rock Thrush, Brown-eared Bulbul and Japanese White-eye. This afternoon we will look for the critically endangered Bryan’s Shearwater, this species is only known to breed on a small islet off Chichijima. We should also see good numbers of Bannerman’s Shearwaters.

Seabird possibilities today could include the Tristram’s Storm-petrel, Bonin Petrel and Bannerman’s Shearwater.

Landings are not permitted but we cruise offshore and hope to find Short-tailed Albatross. Other species could include Black-footed and Laysan Albatrosses, Streaked Shearwater, Tristram’s and Matsudaira’s Storm-petrels.

After breakfast and Japanese arrival formalities, you disembark the ship and board a complimentary transfer to Yokohama railway station. Enquire for a full itinerary. 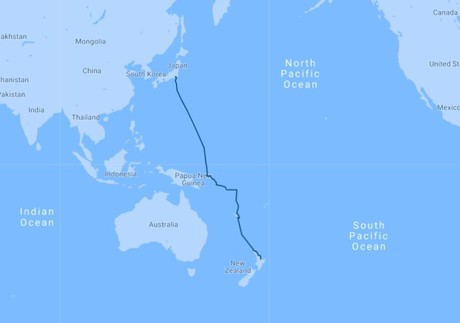