Print a pdf of this cruise
Join Heritage Expeditions, pioneers in authentic small ship expedition cruising, as we explore New Zealand’s remote southern backyard on this special 8-day voyage. Discover the time-forgot rawness of wildlife-rich Stewart Island/Rakiura, Zodiac cruise the rocky, inhospitable coast of The Snares – one of the world’s most important nature reserves, and experience the primordial majesty of Fiordland firsthand on this unforgettable adventure.

Heritage Expeditions pioneered expedition cruising in Fiordland more than 30 years ago. It was from these first, wild Kiwi wilderness adventures the Christchurch-based Russ family’s dream of genuine responsible tourism, which now spans some of the world’s most remote and rarely visited regions and wildlife hotspots from Antarctica through to, and including, the Arctic, was realised. After departing Bluff we set sail for Stewart Island, New Zealand’s third largest island, and predator-free Ulva Island/Te Wharawhara. Rich in history and wildlife, these wild and remote islands are home to a unique range of birdlife including Bellbird, Tui, Kaka, Tomtit, Rifleman, Stewart Island Robin, Saddleback, Mohua and of course, the Stewart Island Brown Kiwi (or Southern Tokoeka). There will be opportunities to listen to the native bird song and enjoy the golden sandy beaches, before taking the time to take a closer look at the history of Paterson Inlet.

Rarely visited and one of New Zealand’s best kept secrets, The Snares is internationally renowned as a wildlife haven where we should see the Snares Crested Penguin, Snares Island Tomtit and Fernbird, New Zealand Fur Seals and tree daisy forest as we Zodiac cruise its jagged coastline. Travelling north we will cruise around South West Cape and the Muttonbird/Titi Islands, an archipelago of three rocky island chains named after the Sooty Shearwater which famously breed here. We hope to make several landings at these remote and sandy beaches and Zodiac cruise the coastline including Codfish Island/Whenua Hous with its history including sealing and, more recently, as one of the most important strongholds of critically endangered Kākāpō.

As we expedition cruise up the lower west side of New Zealand’s South Island, we prepare for the grand scale scenery of Fiordland. Exploring these remote ice carved mountains, verdant forests and winding fiords, it is easy to see why this incredible region inspired our dream for responsible travel. In the calm waters of Fiordland, and away from the crowds, we can expect to encounter playful New Zealand Fur Seals, curious Dusky Dolphins, elusive birds and enjoy endless stunning vistas.

During our time here we plan to Zodiac cruise glittering waterways amid the podocarp forest cloaked spines of Anchor and Resolution Islands and the tiny islands of Dusky Sound where orchids, flame-tipped Rata and clusters of alpine tree daisies put on an impressive floral display.

On predator-free Anchor Island, home to half the world’s population of Kākāpō as well as Little Spotted Kiwi, we’ll walk around Lake Kirirua, its surface reflecting the surrounding forest, before arriving at historic Luncheon Cove - a location of New Zealand firsts including first sealing gang, first European settlement and first ship built in the country. Discover hidden inlets, coves and beaches as we Zodiac cruise Sportsman Cove and explore Cooper Island and experience Fiordland from above with an optional helicopter extension. Discover unseen New Zealand on this iconic Kiwi adventure to rarely visited shores.

Make your way to the Hilton Queenstown Resort & Spa where we will spend the first night of the expedition. This evening an informal dinner at the hotel is an excellent opportunity to meet fellow adventurers and some of your expedition team.

Today we enjoy breakfast in the hotel restaurant after which you will be transferred to Milford Sounds stopping at Mirror Lakes, Knobs Flat and Homer Tunnel before enjoying a spectacular 3-hour nature cruise of Milford Sound under the shadow of mighty Mitre Peak. After this we will transfer you to the ship. The captain and expedition team will be waiting for your arrival at the ship to greet you and show you to your cabin. You will have the opportunity to familiarise yourself on board and there will be formal introductions to the team followed by safety briefings. Join the captain on the bridge or fellow travellers on deck as we set sail for Doubtful and Dusky Sounds.

We have three days to explore the incredible wilderness of fiords in the south-west corner of the South Island. This is an area rich in history, majestic scenery and abundant in wildlife. Fiordland was well known to local Maori people, with the demi-god Tu-teraki-whanoa being said to have used his adze, Te Hamo, to carve out the region’s fiords. Captain Cook and his crew landed here on HMS Resolution in 1773, they were the first Europeans to visit Fiordland, subsequently spending five weeks in Dusky Sound. Cook’s records of his discovery and maps attracted sealers and whalers not long after who then formed the first European settlements of New Zealand, historically this region is very important and shaped the future of the country. Fiordland’s coast is only accessible by sea, making it the most remote region of New Zealand’s mainland. Waterfalls, streams, rivers and fiords are enveloped with misty veils that come and go, revealing steep gradients of mountain peaks and sheltered valleys. A rugged terrain, the thickly forested floors are covered with ferns, lichens and mosses. Bottlenose Dolphins, Fiordland Crested Penguins and Little Penguins are all residents of the fiords; during our time here we will look out for them. Our schedule gives us the flexibility to visit as much as possible, areas we plan to visit during our time in Fiordland include Doubtful Sound, Dusky Sound and Acheron Passage, Astronomer’s Point and Pickersgill Harbour. During our time in Dusky Sound there will be the opportunity to experience an unforgettable helicopter flight through the Sound swooping down alongside Cooper Island and Cook Channel with a landing on Mt Pender where spectacular vistas of islands stretching into the horizon and dotting the winding fiords can be enjoyed.

Today we plan to Zodiac cruise the craggy coastline of these ancient granite islands on an unforgettable wildlife safari. You’ll soon discover why these pristine nature reserves have been afforded both UNESCO World Heritage status and the highest level of government protection as we explore sea caves and observe wildlife in spectacular numbers. Highlights include Snares Crested Penguins navigating the treacherous ‘Penguin Slide’, New Zealand Fur Seals lazing on jagged rocks, inquisitive Hooker’s/ New Zealand Sea Lions which may approach our Zodiacs and looking for endemic Snares Fernbirds and Tomtits among the large tree daisy forests. Sooty Shearwaters are often seen in incredible numbers rafting on the water and Buller’s Albatross have also been observed nesting and soaring above these priceless ecosystems.

New Zealand’s third island is well off the usual beaten tourist track. It is a wonderfully tranquil place and with 85 per cent of the island designated national park, the scenery of untouched bushland is stunning. Despite its small stature on most maps, Stewart Island has 700-kilometres of coastline so there is much to explore and experience here. Enjoy the impressive bird song as we explore Ulva Island, rich in history and wildlife, which has been predator-free since 1997. Some of the wildlife you may get to see while walking its tracks and exploring Boulder and West End Beaches, Post Office Bay and Sydney Cove include Stewart Island Robin, Stewart Island Weka, South Island Kaka, Kereru (wood pigeon), Mohua (yellowhead), Red-crowned Parakeet, Fantail, Bellbird and Tui. There are many more species that may also be seen, our knowledgeable expedition guides will be listening for bird calls and keeping a close watch in overhead canopies and the surrounding shrubs to identify further species. In Paterson Inlet visit the historic Norwegian whaling station in Prices Inlet and Kaipipi Bay, where from 1923 and 1933 the Ross Sea Whaling Company of Sandefjord, Norway ran a repair base where chaser boats were serviced in preparation for the Antarctic summer. Discover quirky town centre Oban in Halfmoon Bay where a drink with a view can be enjoyed at the historic and iconic South Sea Hotel. Our final plan will be determined by the weather. The Captain and Expedition Leader will work hard to make the best use of our time in this incredible region of New Zealand, including areas that few New Zealanders have visited. The isolation of Fiordland has been beneficial because its beauty remains unspoiled and its historic sites undisturbed. On the evening of Day 7 we will enjoy a celebratory dinner with newfound friends and reflect on a wealth of new experiences from our adventure.

We arrive at the Port of Bluff early in the morning. After breakfast there will be a last minute opportunity to bid farewell to your expedition team as you disembark and board our complimentary coach transfer to either a central city point or to the airport. Our adventure ends but memories will last long beyond this. In case of unexpected delays due to weather and/or port operations we ask you not to book any onward travel from Invercargill until after midday.

During our voyage, circumstances may make it necessary or desirable to deviate from the proposed itinerary. This can include poor weather and opportunities for making unplanned excursions. Your Expedition Leader will keep you fully informed.

• International and Domestic flights, both commercial and charter
• Travel insurance
• Passport and visa costs if applicable
• Beverages on board
• Gratuities
• Any items of a personal nature including laundry
• Helicopter Excursion NZ$450 pp 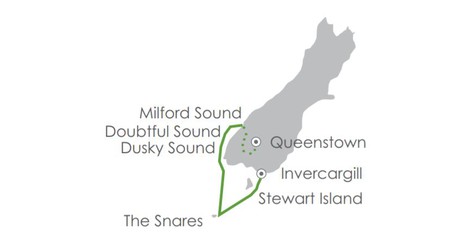