Print a pdf of this cruise
Uncover the hidden gems of Papua New Guinea and the Solomon Islands. From the culturally rich arterial of the Sepik River we sail north across the Bismarck Sea to the remote shores of Manus and Mussau Islands. Manus has the lowest density of people in all New Guinea with its people still living a very traditional lifestyle. Next delve into the history, culture and wildlife of New Ireland and New Britain.

We cross the Buka Channel and at Nissan Island can view reminders of the brief but intensive World War II activities during which the islands were recaptured by Kiwi and British forces from the Japanese occupiers. Then enter a long isolated world as we are amongst the first travellers to return to Bougainville in over two decades. Sailing through the turquoise waters of the Solomon Islands, new vistas and unexpected encounters await.

For birders this itinerary offers once in a lifetime species on remote islands where few have been before. The birding potential is exceptional with many highlights including the Manus Friarbird, Mussau Monarch and the Paradise Drango. Endemic to the Solomon Islands we will be on the lookout for the Roviana Rail and Solomon Sea Eagle. Allowing birders to maximise the opportunities available to them there will be an optional specialised birding programme with customised excursions.

These waters also offer some of the greatest marine diversity in the world and everybody will have the opportunity to snorkel and appreciate the beauty beneath the waves - this ocean aquarium is waiting to be discovered.

Arrive in the port town of Madang and transfer to the Madang Resort for the first night. This evening meet with your fellow travellers and the expedition team over dinner at the resort.

Madang is a thriving community renowned for its traditional artists, world class diving opportunities and the richness of its surrounding forests. This morning we leave Madang for the highlands close to the township; here the tall forests contain a richly diverse wildlife. We arrive back in Madang with time to explore the colourful markets with your Guides. Optional excursions this morning for bird enthusiasts. Late morning board the Spirit of Enderby, settle into your cabin and join the captain and your expedition team on the bridge as we set sail.

Sure to be one of the highlights of our expedition. The Sepik River is the longest river in Papua New Guinea, it is a rich arterial that has fostered great traditional artists. We plan to explore the river by Zodiac following tributaries and channels in search of local wildlife. We also meet with the villagers and marvel at their artistry.

Seldom visited and little known, Manus Island is considered a jewel in the crown of Papua New Guinea. Biologically isolated, the islands are home to a high proportion of endemic species including the Superb Pitta which is likely to be one of the birding highlights of the expedition. The waters around Manus offer some of the most spectacular and rich reefs in the region, seldom explored waters promising a myriad of opportunities.

Mussa Island represents one of the western-most extensions of the Lapita culture. Spend time with the local people to learn about their special culture and life on this remote outpost in the Pacific.

Historic Kavieng has significant evidence from the large Japanese occupation. Birders will leave early for the highlands while the rest of the group will spend the morning exploring the town of Kavieng and its history. Later snorkel in the clear waters of the local reefs.

A tropical atoll bathed in rich tropical currents Nissan Island’s waters abound in marine life. Seldom has anybody had the opportunity to discover this world which promises abundant pelagic fish life and pristine coral reefs. Ashore there are still reminders of the brief but intensive World War II activities on this island, meet with the friendly locals and search the dense woods for some of the elusive birds that occur here.

We plan to be amongst the first expeditioners to re-discover the treasures of Bougainville, long isolated and in a strange way protected by the conflict which swirled around its shores. A pristine island paradise it is home to some of the greatest biodiversity in the region both above and below the waters. We plan to explore the area around Arawa which offers great opportunities to access the island’s interior and reefs.

Today we arrive in the Solomon Islands on the remote northern coast of Choiseul Island. This was once the home of the Choiseul Crested Pigeon and while it no longer walks the forest floor many other species still enliven the forest. We Zodiac cruise deep into the mangrove forest towards the Sui River Falls searching for Dugong and crocodiles.

The volcanic New Georgia Islands are found in the Western Province of the Solomon Islands. Birding enthusiasts will relish landing on Kolombangara Island, where we hope to see the rare Roviana Rail along with other endemic bird species.

The Arnavon Islands are north-west of Santa Isabel, an area rich in marine biodiversity and one of the most important rookeries in the western Pacific for the endangered Hawksbill Turtle. The islands also support a high diversity of terrestrial fauna, with 41 species of birds, six species of bats, and at least seven species of terrestrial reptiles. Sensational snorkelling can be experienced around the islands.

Honiara was founded as a military base during World War II and was witness to the Naval Battle of Guadalcanal. Tour Honiara, visiting historical sites including Henderson Airfield, war memorials and the open-air war museum while the birders head to the rain-forested slopes of Mount Austen in search of some of the Solomon Islands’ most spectacular birds including the Solomon Sea Eagle. For those disembarking a transfer to either a central city hotel or to the airport will conclude your voyage OR join us to discover the Secrets of Melanesia.

International and Domestic flights, both commercial and charter
Travel insurance
Passport and visa costs if applicable
Beverages on board
Gratuities
Any items of a personal nature including laundry 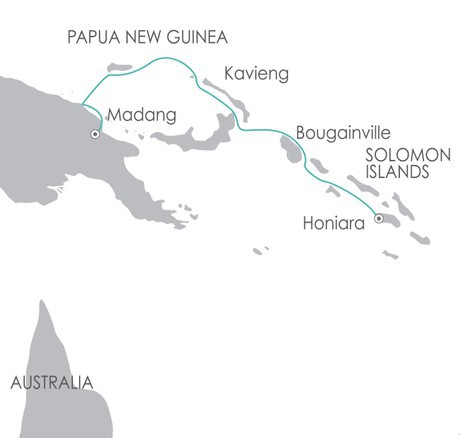