Print a pdf of this cruise
Siberia's eastern coastline is undoubtedly one of the most remote and least visited regions of the globe. It is home to several groups of indigenous people, including the Itelmen, Koryak, Even and Chukchi. Fur trappers and sealers plundered the regions natural resources in the name of the Tsar in the early 17th Century. Stalin and subsequent leaders encouraged economic development in this part of the Soviet Union. Soviet towns were built, bonuses were paid to those who would immigrate and work there and attempts were made to collectivise the traditional way of life.

As the iron curtain was drawn and the Cold War escalated, this region became forbidden territory. Travel to and within the area was strictly controlled, the number of military installations increased, early radar warning stations proliferated and Russia's Pacific fleet patrolled the coastline.

This all changed in the early 1990s with Perestroika and the collapse of the Soviet Union. Military installations were abandoned, there were mass migrations of workers back west and towns and industries were simply abandoned. As the heavily subsided economy collapsed the indigenous people were forced back to traditional ways of life but permits to travel through the area did become a little easier to obtain.

Twenty five years on, travel through this region is still heavily regulated and virtually impossible for the independent traveller. There is little or no infrastructure, only a few kilometres of road, no hotels apart from in the main towns of Petropavlovsk-Kamchatskiy and Anadyr. These towns have scheduled air services, but access to the rest of the region either by air or sea even for locals is at best ‘unpredictable'.

Throughout its chequered human history its rich natural history has largely gone unnoticed and unknown by the rest of the world. It is an amazing coastline dominated by the volcanoes of Kamchatka in the south, the fiords of what was formally the Koryak region and the rich estuarine areas and tundra of Chukotka.

This coastline has one of the most diverse assemblages of wildlife and habitats of anywhere of a similar latitude on the globe and virtually no people or visitors to disturb them. One of the most iconic species is the critically endangered Spoon-billed Sandpiper that is endemic to the region. For the past 7 years we have supported BirdLife International and Birds Russia research teams working on this species. Our 2018 expedition not only continues that support but it expands it to include other seabirds and waders as researchers monitor potential changes in their populations and distribution due to a variety of reasons including climate change.

Arrive into Petropavlovsk-Kamchatskiy, the capital and administrative centre of the Kamchatka Region and transfer to the port to board the Spirit of Enderby.

We plan to spend the morning Zodiac cruising on the Zhupanova River. Our main target here is the Steller’s Sea Eagle and there are usually some occupied nests close to the river. Good numbers of Largha Seals are also often hauled out on sandbars in the river and we should see a good variety of waterfowl and waders. By late afternoon, we should be over deep water heading for the Commander Islands and new species to look for include Laysan Albatross, Mottled Petrel and the Fork-tailed Storm-Petrel. The Kamchatka Trench can also be excellent for cetaceans and we have previously seen Blue Whales on this crossing.

The wildlife-rich Commander Islands were first discovered by the Commander Vitus Bering when his ship was wrecked here in 1741. We intend to explore the islands through a combination of landings and Zodiac cruises and our first stop will be the village of Nikolskoye, where there is an interesting museum. Zodiac cruising is often spectacular and we hope to encounter Red-faced Cormorant, Red-legged Kittiwake, Pigeon Guillemot, Horned Puffin, as well as Parakeet, Crested and Whiskered Auklets and Sea Otters. Our plans also include a ship cruise along the southern coast of Bering Island, as this area is excellent for cetaceans with Humpback, Sperm, Northern Minke, Orcas and Baird’s Beaked Whales all regularly encountered.

Our proposed landing site is a patchwork of boggy tundra, ponds and shingle spits where an interesting range of waders can be found including Pacific Golden Plover, Red-necked Stint and Red-necked Phalarope. We also hope to see Bluethroat and Pallas’ Reed Bunting.

Verkhoturova Island has some huge seabird colonies and by following a short trail to the cliff top we should be able to enjoy some fantastic views of Tufted Puffins, Brunnich’s Guillemots, Pelagic Cormorants and Black-legged Kittiwakes. Both Steller’s, Eider and Harlequin Duck occur here too and we may also see some Steller Sea Lions, as they are often hauled out on some offshore rocks. Later in the day, there will be either a Zodiac cruise or landing on the Govena Peninsula. Good numbers of brown bears can often be found here.

Days 7 to 10: Koryak and Chukotka Coast

During these days of the expedition we will travel along this largely unknown part of the coast. It comprises deep forested fiords where we should see brown bears, Red Fox and with luck, mountain sheep and Kamchatka Marmots. In the many lagoons and shallow bays there is a vast array of birdlife including Tundra Bean Goose, Steller’s Eider, Great Knot, Long Tailed Stint, Gyrfalcon, Siberian Accenter and Asian Rosy Finch. This area is also a stronghold of the Kittlitz’s Murrelet and we should see several during our journey. In our previous expeditions we have explored much of this coastline, documenting the distribution and abundance of many species. In 2011 we recorded a previously unknown breeding population of Spoon-billed Sandpiper. Working alongside researchers from BirdLife International and Birds Russia who will be travelling with us, we plan to revisit many of these areas to monitor changes and search for new breeding colonies. There will be unique opportunities for photography, for hiking and ‘birding’ in country where literally only a few ‘westerners’ have ever been and we know there is a rich diversity of species.

Meinypil’gyno, located on a 40km long shingle spit is the most important site in the world for breeding Spoon-billed Sandpiper. Here about ten pairs are monitored by members of the Spoon-billed Sandpiper Recovery Taskforce. We will be guests of the Taskforce and if possible we may be guided to one of their monitored nests. The area is extremely rich in other wildlife, so we may also find Emperor Goose, Pacific Diver, White-billed Diver and Sandhill Crane. The lagoon entrance often has Largha Seal, Gray and Beluga Whales and Sabine’s Gull.

This coastline is rich in marine mammals and one creature we will be looking for in particular, is the walrus, as there is a known haul out. The animals do regularly move between locations, so finding them is always very much a matter of luck, although we have had success here in the past. Good numbers of Gray Whales often congregate here too. To the north of Cape Navarin is Keyngypilgyn Lagoon. On previous visits we have found this an excellent location for waterfowl and waders including Emperor Geese, Greater White-fronted Geese, Brant Geese, Whooper Swan, King Eiders, Red Knots and Aleutian Tern.

As we cruise into Anadyr Bay, there is an excellent chance of seeing more Beluga Whales and after a final breakfast on board the Spirit of Enderby, it will be time to disembark. We will provide complimentary transfers to a downtown hotel and the airport.

Join experienced kayakers Judd Hill and Al Bakker as we launch our kayaks from the Spirit of Enderby which acts as a floating base camp for special excursions and shore landings. Cruising in a small group of about 6 to 10 paddlers, we will generally visit the same sites as the Zodiacs but be more independent and perhaps access areas not appropriate for Zodiacs. If the ship’s schedule allows, it may be possible to do an extended day trip, taking our lunch with us. 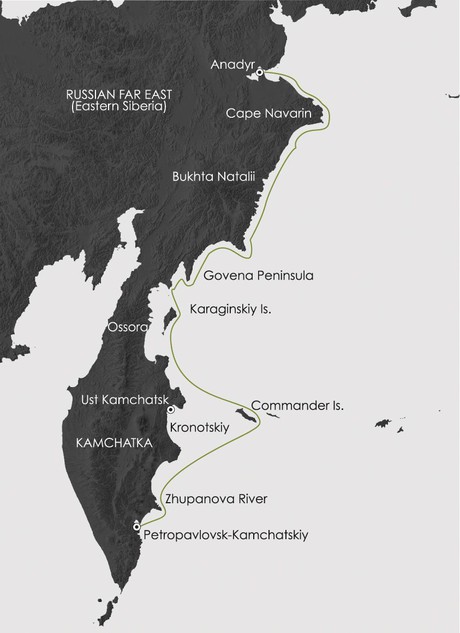 • Cape Navarin and Keyngypilgyn Lagoon: Look for marine mammals and one creature in particular - the walrus, as there is a known haul out
Enquire Now