Print a pdf of this cruise
Explore Scotland’s heartland harbours, villages and islands. It’s history of ages past, whilst making your own history viewing brochs, standing stones and rings. Isles where the wildlife is in abundance. A land where the people are waiting to welcome you to their unique culture – a culture which may reflect threads of your own heritage.

AARON RUSS began expedition cruising from the age of six and has been sailing ever since. Russ grew up close to wildlife and the wilderness with his family’s 30 year old expedition cruise business Heritage
Expeditions. Russ has been an expedition leader on over 100 expeditions to some of the world’s most remote regions. With a degree in zoology, a passion for photography and a desire to showcase the world’s most premier natural history destinations - expediton leading comes naturally.

• Discover Kinloch Castle on the Isle of Rum

• Explore historic Iona Abbey, on the island of Iona

• Visit Mousa Broch - the best preserved broch in the world

• Visit Fair Isle famous for its knitters and puffins

Scotland’s largest city, Glasgow, features modern architecture beside Italiante steeples, neo-gothic towers and the Art Nouveau designs of Glasgow’s own Charles Rennie Mackintosh. Take the time to explore the Willow Tea Rooms and the Glasgow School of Art, cruise the Clyde to the Riverside Museum, enjoy the Clyde walkway, visit the modern Glasgow Science Centre or visit the Kelvingrove Art Gallery – your options are as diverse as the city. Overnight at our centrally located hotel where we will meet for dinner and run through an introduction to our programme as we commence our discovery of Scotland in Depth.

Travelling north from Glasgow the famed shores of Loch Lomond call us. This freshwater Scottish loch is the largest inland stretch of water in Great Britain. Ben Lomond, a munro, rising to 974 m (3196ft) flanks the eastern shores whilst the highway pushes northwards on the western shores. At Inveraray Castle we connect with Clan Campbell as we walk around the beautiful grounds and explore the castle. Your first view of Oban, is one you will truly never forget as you come down the hill towards the bay the view opens before you. We join our expedition ship MV Serenissima, its welcome aboard with time to settle in before we cruise out of the harbour.

The southernmost isle of the Southern Hebrides, Gigha is one of the smallest populated Islands in the Hebrides. Meaning Good or God Island, the highest mountain is Creag Breahn. Nestled in woodland and extensive gardens Achamore House was built in 1884 for Lt-Col William James Scarlett, the 3rd Lord Abinger. One of the warmest places in Scotland, the gardens of Achamore House was purchased by the people of Gigha in 2002. Operated as a Trust they represent the plant collector’s love and the garden designer’s eye. The earliest documented record of distilling in Scotland occurred as long ago as 1494, in the tax records of the day, the Exchequer Rolls. The entry lists “Eight bolls of malt to Friar John Cor where with to make aqua vitae” (water of life). This afternoon, be part of history and share a dram of whisky, the water of life, ashore at one of Islay’s historic distilleries: Lagavulin Distillery.

Our visit to Staffa features the hexagonal basalt cliffs which culminate in Fingal’s Cave- a spectacular natural feature named by the Celts as ‘Uamh-Binh’ or “the Cave of Melody”. Abundant puffins, razorbills and guillemots use the island for breeding and accessing the surrounding rich marine environment. This afternoon we visit Iona. The centre of the Celtic world in 563 AD, the Irish missionary St. Columba went into exile and established a small monastic community there, its basic layout is known through the writings of Abbot Adomnan in the 600s. Driven out of Iona by Viking raids, most of the monastic community moved to Kells in Ireland around 800. In more peaceful times, around 1200, a Benedictine abbey and nunnery were established on the site. It is these buildings (heavily restored) that we see today.

Isle of Skye’s southern coast is remote, mainly uninhabited and home to the Cuillin Mountains. Loch Courisk is nestled securely in the landscape folds of the Cuillin Ridge, a freshwater loch and is separated from the sea by the Scavaig River. Our short walk along this river gives access to the Loch, or the adventurous can take the opportunity to explore further. Later in the quiet Isle of Rum, Kinloch Castle greets us. Built of Isle of Arran sandstone the castle took three years and upwards of 300 craftsmen to build. The Kinloch castle, was the first private residence in Scotland to have electricity, it was unique for this time to have an electrician. The electricity was derived from a hydro dam constructed on the Coire Dubh Burn. Now under the care of the Scottish Natural Heritage its restoration is a work in progress.

At the southern tip of the Outer Hebrides, Mingulay is home to puffins, guillemots, kittiwakes, shags, fulmars and razorbills and there are possible sightings of eagles and peregrine falcons. The islands last inhabitants abandoned the village in 1912 leaving to neighbouring Vatersay. Mingulay is now owned by the National Trust of Scotland. Barra is the ancestral island of Clan MacNeil whose chiefs were based at Kisimul Castle. Everyone who visits feels the power of the castle, especially those named MacNeil.

Remote and battered by the Atlantic seas, St Kilda is a near mystical island with dual UNESCO World Heritage site status for its natural and cultural significance. St Kilda is deemed Europe’s most important seabird colony – with abundant puffins, fulmars and the largest colony of gannets in Britain. Inhabited till 1930, the 19th century village layout still remains, allowing us to envisage life on this island where the bird life provided sustenance for the villagers. Enjoy the privilege to visit St Kilda and look out across to Village Bay.

Stornoway is the main town on the Isle of Lewis with just over 6,000 people, about a third of the islands total population - home to a mix of traditional industries like fishing, Harris Tweed and farming. Arriving at Stornoway we land in this Gaelic heartland to explore the Stone Age ‘Callanish’, the primordial configuration of standing stones. Crossing the gentle troughs and rounded tops of the landscape we explore the cultural Gearrannan Blackhouse Village and meet the people of this area. As we stroll the alleyways of Stornoway, check out the local tweed or wander the pathways of Lews Castle gardens we are sure to discover the secret of timelessness in the Hebrides.

From Bronze Age man, Iron Age people, Vikings and World Wars – time has left its mark on the Orkney Islands, the green isles. In the winter of 1850, a great storm battered Orkney, the grass was stripped from a large mound, then known as ‘Skerrabra’. The outline of a number of stone buildings was revealed- something that intrigued the local laird, William Watt of Skaill, he embarked on an excavation of the site. Today, Skara Brae, as it has become known- survives as eight dwellings, linked together by a series of low, covered passages.

Lerwick is the Shetland Islands capital. Its cobblestone streets once filled with the rush created by fishing and ship building, today this port town charms as you wander the same streets of the town and waterfront. To the south of Lerwick is Jarlshoff where we delve into more than 4,000 years of human settlement in the same location. Neolithic people first settled this site in Shetland around 2700 BC, and it remained in use until the AD 1600s. Discoveries made here include oval-shaped Bronze Age houses, an Iron Age broch and wheelhouses, Norse longhouses, a medieval farmstead, and a laird’s house dating back to the 1500s. This afternoon we land at Mousa Broch, standing 13 m high, it is Scotland’s most impressive and best surviving Iron Age tower or broch. Today we know brochs were built in Shetland around 400- 200 BC, the quality of stone, the workmanship and overall size of Mousa are believed to contribute to why it has survived so well.

Famous for birds, knitwear and historic shipwrecks, Fair Isle is a tiny jewel of an island lying half-way between Orkney and Shetland. Owned by the National Trust for Scotland, it’s one of Britain’s most successful small communities, pioneering projects in wildlife tourism, windpower and sustainable management of the environment. The island is an internationally important seabird breeding site. From April to August the cliffs are busy with the sound (and smell!) of thousands of fulmars, kittiwakes, razorbills, guillemots, gannets, shags and puffins, while skuas and terns fiercely defend their nests on the moorland. The 70 or so islanders mostly live in traditional crofts on the more fertile and low-lying southern third of the island. The northern part is largely rough grazing and rocky moorland, rising to the 217 m Ward hill.

On arrival to Aberdeen we will continue our exploration over land, departing south to the historic Dunottar Castle, before exploring the iconic township of St Andrews including the ruins. Later we dine together in Edinburgh as we complete our exploration of Scotland in Depth. Overnight accommodation and breakfast the following morning included.

After breakfast and final farewells, continue on with your travel arrangements, whether that is more time in Edinburgh, south to England, further afield or directly homeward bound.

The ice-strengthened expedition ship Ocean Nova was built in Denmark in 1992 with high ice class to serve Greenland’s west coast. In 2004 to 2005 she was completely refurbished and has now a career as a small and comfortable expedition ship. The Ocean Nova accommodates 86 passengers in single, double and triple cabins, all with sea-view and private facilities. The double cabins have either two lower beds or upper and lower beds. The triple cabins have upper and lower beds. In your cabin you will also find a desk with chair and ample storage space for clothes and equipment.

In the dining room you are treated to delicious meals in between landings and in the panorama lounge you can enjoy a drink with a breathtaking view of the surrounding polar landscape. This is where PolarQuest’s on board specialists entertain and educate you with lectures on polar biology, history, geology and conservation. There is also a library with panoramic views and a good selection of polar books. On board there is a satellite phone, gym and medical doctor. Passengers are welcome on the bridge around the clock and there is always something to see or search for from the spacious observation decks. The ship has North European officers and there is a friendly and informal atmosphere on board. Travelling with this small expedition ship offers an entirely different experience and perspective than you can get on a larger and more conventional cruise ship. 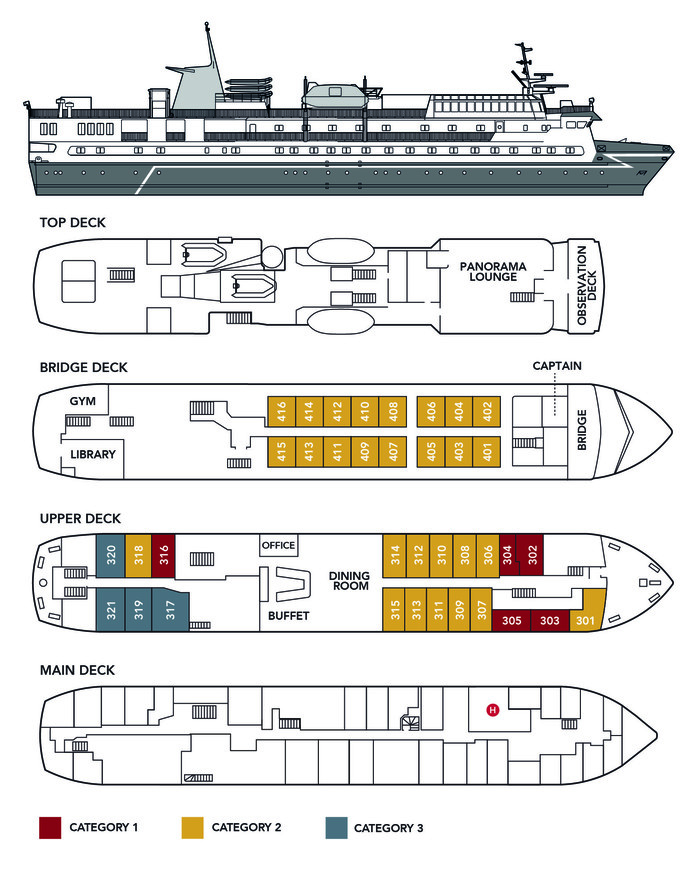 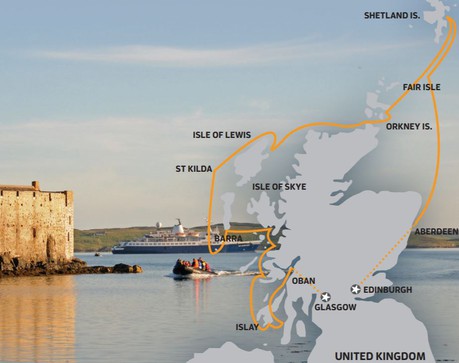