Print a pdf of this cruise
Our first Discovery Cruise voyages to the Ross Sea were successfully completed in 2013. Join us for an new exploratory voyage to Campbell Island, home to the Southern Royal Albatross, to the huts of Shackleton and Scott on Ross Island, to the Bay of Whales and Kainan Bay, the starting points from where Norwegian Amundsen and the Japanese Shirase gained access to the ice-shelf in 1911 and 1912, and where Byrd wintered in Little America.

During those voyages we will transfer our passengers ashore by zodiac. But, we will also operate our two helicopters in certain sites where Zodiacs cannot be used. Potential candidates (not guaranteed) for helicopter transfers are Cape Evans (hut of Scott), Cape Royds (hut of Shackleton), Ross Ice Shelf at Bay of Whales, Peter I Island, and the Dry Valleys. In theory, we plan on five helicopter based landings, but a specific amount of helicopter time cannot be predicted.

Helicopter operations
The use of helicopters is a great advantage and can support us in our goal to reach certain landing sites, that otherwise are almost inaccessible. However, this is a true expedition and we operate our itinerary in the world’s most remote area, ruled by the forces of nature, weather and ice conditions. Conditions may change rapidly; having its impact on the helicopter operation and passengers should understand and accept this. Safety is our greatest concern and no compromises can be made. No guarantees can be given and no claims will be accepted. The vessel is equipped with two helicopters, but in the case that one helicopter is unable to fly due to for example a technical failure, the helicopter operation will cease or even be cancelled, due to the fact that one helicopter always needs to be supported by a second operational helicopter. No guarantees can be given and in no event will claims be accepted.

Your voyage rates include ship-to-shore helicopter transfers (with no specific amount of helicopter time guaranteed).

Day 1: End of the world, start of a journey

Day 4: Through the Pendleton Strait

From the peninsula you head toward the open sea, your course set for Peter I Island.

Day 7: A rare glimpse of Peter I Island

Keeping to the Ross Sea, your aim is now to visit Ross Island. In this location you can see Mount Erebus, Mount Terror, and Mount Byrd, as well as many other famous spots that played an important role in the British expeditions of the last century: Cape Royds, where Ernest Shackleton’s cabin still stands; Cape Evans, where the cabin of Robert Falcon Scott can still be seen; and Hut Point, from which Scott and his men set out for the South Pole. If ice is blocking the way but weather conditions are favorable, you may use the helicopters to land in one or more spots in this area. The New Zealand’s Scott Base is a possible location you might visit. Unfortunately Ortelius was not granted permit to visit McMurdo Station on this trip due to high activity levels on the station. Additionally, you may make a helicopter landing in Taylor Valley, one of the Dry Valleys, where conditions are closer to Mars than anywhere else on Earth.

Day 23: The residents of Cape Adare

Sailing through the sea ice at the entrance of the Ross Sea, you start your journey north through the Southern Ocean. The goal is to set a course for the Balleny Islands, depending on weather conditions.

You once again enter the vast expanse of the Southern Ocean. Seabirds are prolific on this leg, during which we hope to enjoy good weather conditions.

Day 32: Once more to the Southern Ocean

Take in the vast horizons of your final sea day before you reach New Zealand.

Every adventure, no matter how sublime, must eventually come to an end. You disembark in Bluff, the southernmost town in New Zealand, and return home with memories that will accompany you wherever your next adventure lies.

• Voyage in selected accommodation category
• All meals while on board the ship
• Coffee and Tea while on board
• All shore excursions and landings by zodiac as per the itinerary
• Lectures held on board by Expedition Team and natuarlists
• Port Charges/Taxes
• Comprehensive Pre-departure materials
Trip specific inclusions;
Rubber boots and snow shoes for use throughout the voyage
Luggage transfer from pick-up point to the vessel on the day of embarkation, in Ushuaia.
Group transfer from the vessel in Bluff to the airport in Invercargill.
Ship-to-shore helicopter transfers (with no specific amount of helicopter time guaranteed) 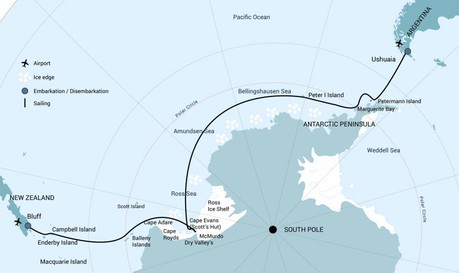