Passage Through the Balkans with Croatian Island Discovery (Lady Eleganza)

Print a pdf of this cruise
Passage Through the Balkans with Croatian Island Discovery - 16 day Small Ship Cruise from Belgrade to Opatija aboard Lady Eleganza.

SIGNATURE EXPERIENCE
These once-in-a-lifetime moments allow you to experience an unforgettable world of exclusive moments, incredible cultures and charming surprises

In the Serbian capital of Belgrade today, we’ll meet you on arrival and transfer you to your hotel. There’s time to relax before a welcome dinner with fellow guests this evening. Stay: Two Nights, Belgrade, Hilton Hotel or similar

Today, experience Belgrade on a walking discovery, including the Old Town’s Bohemian quarter, where cobbled streets are lined with trees and cafes. At its heart, take a stroll down the curved street of Skardalija dotted with taverns, art galleries and antique shops. Later, you’ll also visit the burial place of Josip Broz Tito, Belgrade Fortress, Kalemegdan Park and the Church of Saint Sava, one of the largest Orthodox places of worship in the world.

After breakfast this morning, head for Zlatibor, a region of mountains, rolling hills and rural villages, considered one of the most beautiful in Serbia. Along the way, linger in a local winery, which has been family-owned for generations, where warm hospitality and wine tasting are the order of the day. Later, continue to your hotel for the next two nights. Stay: Two Nights, Hotel Zlatibor Mona or similar.

It’s all aboard the Šargan Eight Railroad this morning, as this heritage narrow-gauge railway loops through lovely scenery. You’ll also learn about this historical feat of engineering, which was built by Austro-Hungarian forces during World War I. Afterwards, continue to the timber village of Drvengard for lunch. Filmmaker Emir Kusturica created this village as the setting for his film Life is a Miracle and it is now an open-air museum depicting traditional life. This afternoon is dedicated to exploring Tara National Park. Nothing short of breathtaking, you’ll see pristine forested slopes, ravines and the dramatic Drina River Canyon, which is the third largest of its kind in the world.

Sit back and watch the views slide by as you journey from Zlatibor to Sarajevo this morning. Once you’ve arrived in the capital of Bosnia and Herzegovina, there’s time to settle into your hotel and enjoy this afternoon as you like. With a full day set aside to discovering Sarajevo tomorrow, you might like to relax a while before dinner at a local restaurant this evening. Stay: Two Nights, Sarajevo, Hotel Europe or similar

FREEDOM OF CHOICE ™ Perhaps visit Sarajevo’s Old Town, including the Baščaršija, which is the city’s ancient bazaar as well as its cultural and historical centre. Baščaršija dates back to the 15th century when it was founded by Isa-Beg Isaković. Afterwards, enjoy a wander along Coppersmith’s Street and see the Yellow and White Bastions, which are part of the old wall that originally protected the city. Alternatively, journey to Bijambare Nature Park, not far from Sarajevo, and explore the ancient Bijambare caves. This limestone cave complex, filled with stalagmites and stalactites, enjoys a stunning natural setting of pine forests and pasture. Fascinating Sarajevo was at the centre of monumental events in the 10th century – the assassination which launched World War I, and the four-year siege of the city during the Balkans conflict in the 1990s. While scars remain, it has regained its status as a beautiful and cosmopolitan city.

Leaving Sarajevo, set out for the historical city of Mostar today, arriving in time for lunch. Spanning a valley carved out by the Neretva River, this is a city packed with charming streets and architecture, clustered along steep river banks. First, sample traditional street food, burek (a delicious meat or cheese pastry), before continuing to see Stari Most (Old Bridge). This is the city’s centrepiece, a magnificent stone arch between medieval towers, which straddles the Neretva River. This 16th-century Ottoman treasure was rebuilt in 2004 and is now a World Heritage-listed structure known for its tradition of bridge diving. Later, take your time discovering the colourful stalls and handicrafts on display at the local bazaar of Kujundžiluk. Stay: Mostar, Hotel Mepas or similar

This morning, travel to the ancient walled city of Dubrovnik, on the shores of the Adriatic. Set against a rugged mountain backdrop, this idyllic coastal city is a regular on the silver screen. Take your time settling into your cabin aboard the MV Lady Eleganza before joining a guided discovery of Dubrovnik’s Old Town and its maze of alleyways. Stay: 8 Nights, MV Lady Eleganza

This morning in Dubrovnik set out for a guided tour of the medieval walled city. Then set sail to Mljet, one of the few Dalmatian islands that was never ruled by the Venetian Republic. During a tour of its national park, discover its pristine turquoise lakes.

Today arrive in Korčula, Marco Polo's birthplace. Then head from the coast to one of Croatia's main islands, fascinating Vis. The island was used as a military base for the Yugoslav army and only opened up to tourism in 1989. Enjoy dinner on board as your ship moors overnight.

Today depart from Vis and sail to Hvar, and take a short coach ride across the island to the stunning Old Town. Return to the ship for lunch and spend the afternoon in Hvar. Perhaps take an after-dinner stroll through the town, and visit a tavern or a cafe.

Sail to Šibenik and then head to beautiful Krka National Park. Here, explore the dramatic waterfalls. Take a walk along wooden jetties and bridges to admire the falls, and the unique flora and fauna.

SIGNATURE EXPERIENCE Travel to the traditional village of Radošić. Sample local brandy and home-made doughnuts, then watch a local dance that has been passed down through generations. Afterwards, enjoy a cooking demonstration of how the villagers make their bread, before a tour of the village and a meal. Cruise among the 140 islands that make up the Kornati archipelago, then perhaps enjoy a swim from the ship's rear deck.

This morning enjoy a guided walk of Zadar's well-preserved Old Town, Roman columns, Romanesque churches and Renaissance palaces. Continue to Pag, where the MV Lady Eleganza will dock overnight, giving you a chance to explore the pleasures of the city after the busy daytime crowds have dispersed.

Arrive in Rab and meander through the narrow old alleys of the picturesque Old Town. Then sail to the beautiful island of Krk, where weather permitting, your ship will drop its anchor so you can enjoy a swim straight from the deck of the ship. Tonight, enjoy a farewell dinner.

After breakfast you will be transferred to Zagreb Airport for your onward flight.

Itinerary and inclusions are subject to change

Savour the all-inclusive lifestyle aboard the MV Lady Eleganza, which has been custom-made for exploring the coastlines of Croatia and Montenegro.

Designed especially for the Adriatic Coast and newly built for the 2021 cruising season - An intimate cruising experience with just 34 guests on board - Dock overnight in every port and step ashore to explore coastal towns - Enjoy complimentary drinks and excellent dining on board - Take in the stunning coastal scenery from up on the sun deck - Be well looked after by a close-knit, experienced crew

Savour the informal onboard atmosphere and skip the queues while embarking and disembarking. As night falls, choose to dine ashore and experience Croatia's glamorous harbours and towns without the crowds, once the bigger cruise ships have departed. The MV Lady Eleganza is one of the few vessels her size able to sail to Montenegro and its magnificent Bay of Kotor.

From locally inspired meals and al fresco lunches to sumptuous breakfasts and more, experience a range of dining experiences. All meals are included, and a wide range of included beverages are served at your discretion.

Whether enjoying the air-conditioned lounge and bar or reclining on a sunbed up on the sun deck, you can relax and unwind anywhere on board. Leap straight into the Adriatic Sea from the spacious swimming deck at the stern of MV Lady Eleganza. The ship also features a state-of-the-art infotainment system, stand-up paddle boards, an outdoor dining area and barbecue.

The experienced captain and crew are a small, close-knit team with expert knowledge of the Adriatic Coast. Your comfort and security are their first priority at all times. 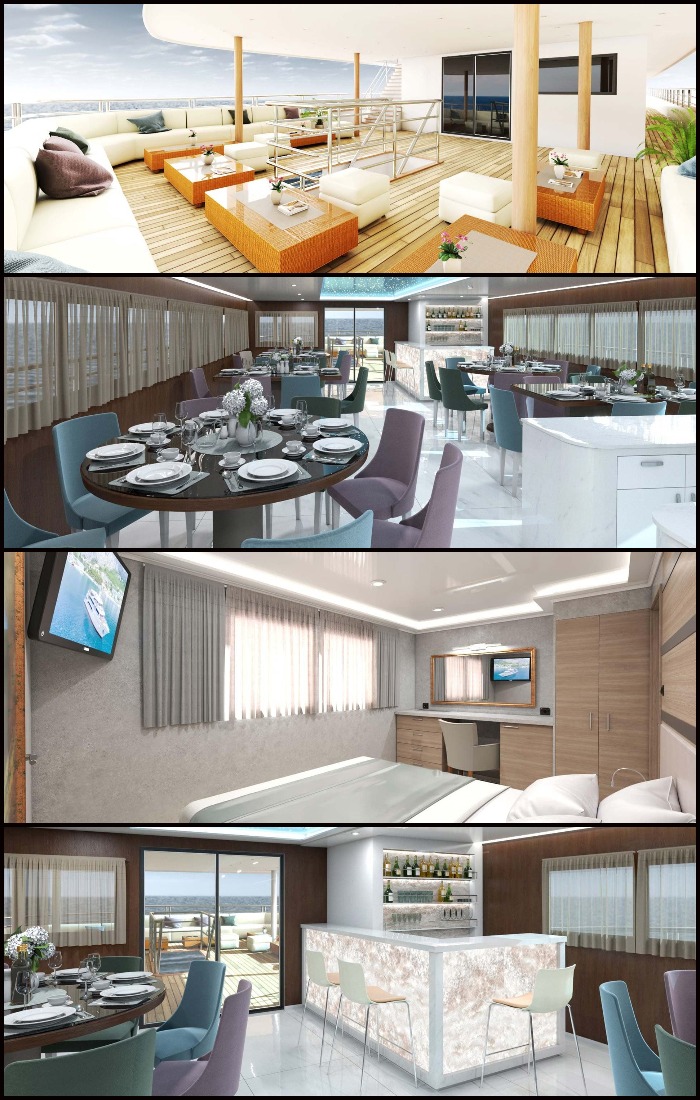 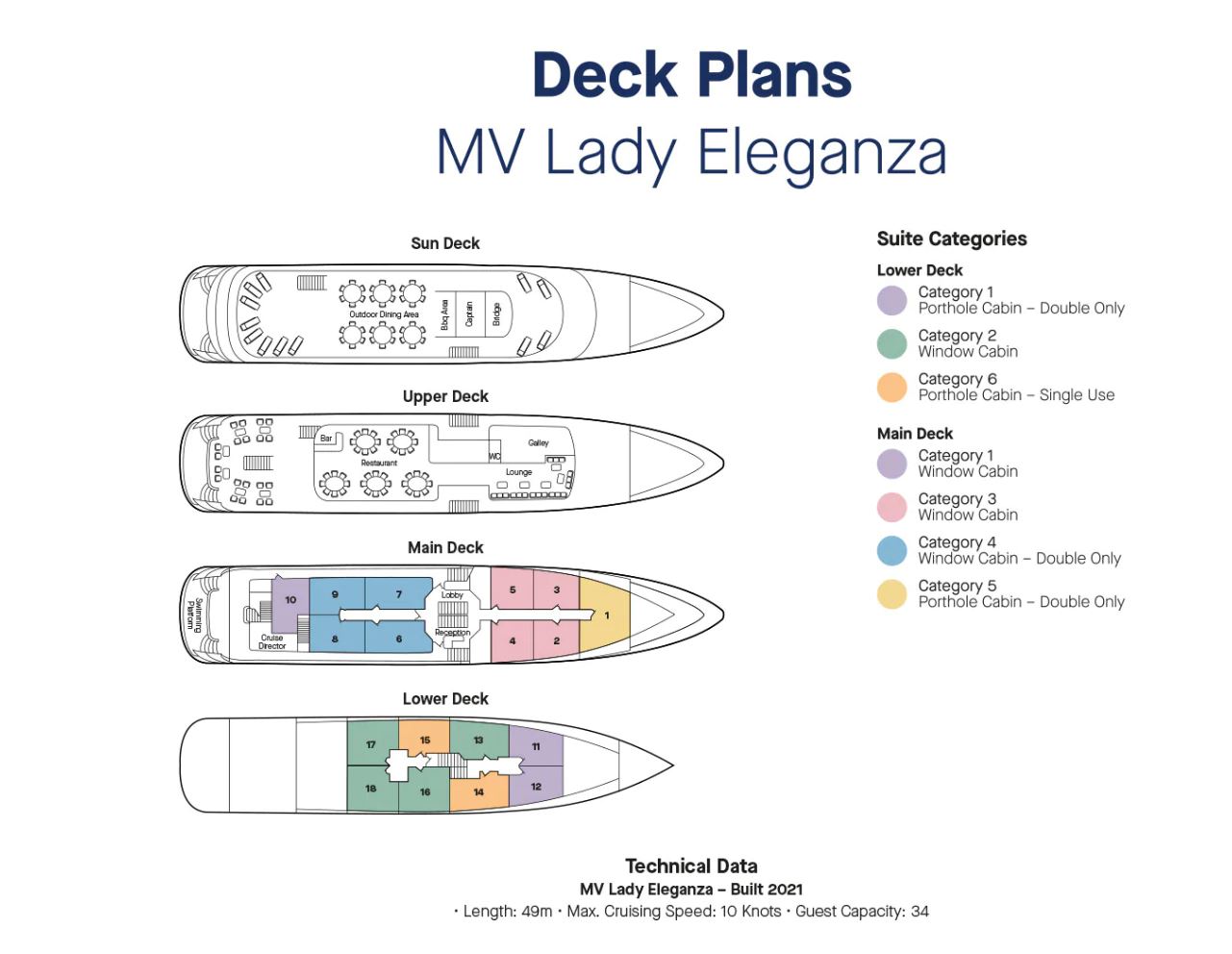 Voyage on board in selected cabin category
Meals as per the itinerary
Airport transfers on the first and last day of the itinerary
Gratuities
Port charges
Selected beverages on board
Wi-fi on board (Subject to coverage)
• Experiences in 14 destinations
• Finest dining - a total of 40 meals and all onboard beverages
• Seven nights authentic land accommodation
• Eight nights on a Small Ship cruise, the MV Lady Eleganza
• A wide range of onboard beverages
• Expert APT Tour and Cruise Directors 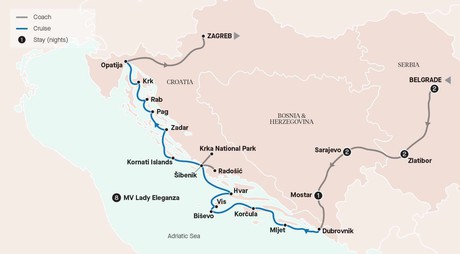