Print a pdf of this cruise
In the Wake of Great Explorers
On this Northwest Passage expedition cruise, we sail in the wake of the great explorers to rediscover the remote beauty of pristine Arctic wilderness. We explore in the tradition of Roald Amundsen, the first man to sail the Northwest Passage.

If the elements allow, we will sail from Cambridge Bay to venture into the archipelago of Nunavut. As we make our way through the icy waters, you will be amazed by the vast expanses of pristine wilderness seen from the deck of MS Fram.

History, Landings and Natural Beauty
We aim to visit several sites with traces of earlier expeditions. We hope to call at some of the world’s northernmost communities, explore legendary inlets and channels, and take you on exciting small boat cruising and landings, and our Expedition Team will take every opportunity to launch kayaks or take you on hikes. Next, we cross the Davis Strait to reach Greenland to discover Inuit settlements and the Ilulissat Icefjord, a UNESCO World Heritage Site. Crossing Labrador Sea once more, we head towards Canada to visit colourful villages before the expedition concludes in Halifax.

A True Expedition
Being at the top of the world means sailing among beautiful but challenging ice formations. On this Northwest Passage voyage, like the voyages of the explorers before us, we will go where the ice allows. No matter where we sail or what we will see, we can promise a safe and thrilling expedition.

• Explore some of the most spectacular and unspoilt scenery on Earth

Canada´s Festival City Hotel Enjoy the lively and colourful city of Edmonton on one of our Pre-programmes before your expedition begins.

A Good Fishing Place Embarkation After breakfast, you will be transferred to the airport for your flight to Cambridge Bay. In Inuinnaqtun, Cambridge Bay is called 'Iqaluktuuttiaq', meaning a 'good fishing place', as it is famous for giant char caught in local waters. There is abundant wildlife in the area: seals, geese, muskoxen and caribou. Our expedition with MS Fram starts here.

Heart of the Northwest Passage We aim to head into the heart of the Northwest Passage. Since the late 15th century, the search for this fabled seaway through the Canadian Arctic was a holy grail for hardy adventurers. The first recorded voyage was led by John Cabot in 1497. The most famous journey here was James Cook’s failed attempt in 1776, and of course the ill-fated Franklin expedition of 1845. The first to conquer the Passage by ship was Norwegian explorer Roald Amundsen on an expedition that lasted from 1903 to 1906. Ice conditions vary, so each voyage here is unique. Subject to favourable conditions, we hope to be able to explore some of the following places: Gjøa Haven honours the Norwegian explorer Roald Amundsen, who wintered here from 1903 on the Gjøa expedition. He called the place 'the finest little harbour in the world.' He learned a great deal from local Netslik Inuit people about survival and travel in polar regions. Fort Ross was established in 1937. There are two small huts ashore maintained by the Canadian Coast Guard, and occasionally used by the local Inuit for shelter. Beechey Island is closely linked to the history of exploration of the Northwest Passage, particularly the voyage led by Sir John Franklin, whose two ships sailed into the passage in 1845, but never returned. It is known that the Franklin Expedition over-wintered here in 1845. Radstock Bay is dominated by the rock of Caswell Tower. The shoreline here is excellent for short walks to a pre-historic Inuit site. Caswell Tower itself features a challenging hike to the summit for great views. Dundas Harbour is an abandoned settlement with an old Royal Canadian Mounted Police camp and several archaeological sites from the Thule period. Picturesque Pond Inlet, called 'Mittimatalik' in Inuktitut, is a traditional Inuit community on Baffin Island. Pond Inlet is surrounded by mountain ranges, with glaciers, scenic fjords, ice caves, geological hoodoos and drifting icebergs to marvel at. Throughout the journey, we will sail in pristine straits that support rich wildlife, so we will be on a constant look out for amazing creatures such as polar bears.

Crossing the Davis Strait This strait was named for the English explorer John Davis who searched for a route through the Passage between 1585 and 1587. Davis was the first to draw attention to seal hunting and whaling possibilities in the area, and to show that the Newfoundland cod fisheries extended this far north.

Birth of Icebergs Full day The stunning scenery of the Ilulissat Icefjord has earned it the designation as a UNESCO World Heritage Site. At the mouth of the fjord, you can often see enormous icebergs that have run aground. These originate from the Jakobshavn Glacier, one of the most productive glaciers in the Northern Hemisphere.

Modern Settlement with Ancient Traditions Full day Sisimiut is situated 40 km north of the Arctic Circle and is a modern settlement that maintains ancient traditions. Come ashore to explore the colourful town; visit the small museum, hike in the hills and shop for local handicrafts.

Capital of Greenland Full day Nuuk is the political and social centre of Greenland and is the oldest town in the nation, founded in 1728. It has a beautiful setting, at the mouth of one of most spectacular fjord systems in the world. This is a place where old and new traditions meet, from picturesque old buildings in ”Kolonihaven” to the modern architecture of the Greenland Home Rule structure.

Kvanefjord Half day Kvanefjord is a 48 km long fjord on the west coast of Greenland. We will spend the day exploring this amazing terrain.

Labrador Sea We leave Greenland to head for open sea. We will cross the southern part of the Labrador Sea, this time sailing towards Newfoundland and Labrador in Canada.

Red Bay, Labrador Half day Red Bay, on the coast of Labrador, is a classic outpost of Atlantic Canada, a coastal community with a population of less than 200. In 2013, Red Bay Basque Whaling Station was designated a UNESCO World Heritage Site. Wander around the former whaling town and learn about its interesting history.

Corner Brook Full day Corner Brook is located on the west coast of the island of Newfoundland and has approximately 20,000 inhabitants. The area was first surveyed by Captain James Cook in 1767. Explore the charming town centre or enjoy its many walking trails among vibrant autumn leaves.

Relaxing Day Enjoy the deep relaxation of a day at sea as the Expedition Team leads a recap of our fantastic voyage.

Halifax Disembarkation The British established Halifax in 1749. Enjoy a stroll up to the Citadel-crowned hill overlooking the historic provincial capital. Halifax today is both hip and historic, and well worth an extra day or two before you head back home.

Hurtigruten offers unique expedition cruises to some of the most remote and pristine waters of the world. As with all expeditions; nature prevails. Weather, ice and sea conditions set the final framework for all Hurtigruten’s operations. Safety and unparalleled guest experiences are at all times our top priorities. All our indicative itineraries are continuously evaluated for adaptions, whether this is due to constraints the elements unexpectedly present – or exciting possibilities nature and wildlife offer. That is why we call it an expedition.

Our Polar Inside cabins are situated on lower deck and offer a cosy atmosphere. All cabins include bathrooms with shower/wc. Most of the cabins have separate beds where one can be turned into a sofa, and others offer upper and lower berths. Some of the cabins have more facilities than others.

Our Polar Outside cabins are situated on lower deck and they all have bathrooms with shower/wc. Most of them offer separate beds where one can be turned into a sofa, and others offer upper and lower berths. Some of the cabins have more facilities than others.

Our Arctic Superior cabins are comfortable cabins situated on both upper and middle deck, where you can enjoy a relaxing atmosphere. All the cabins have bathrooms with shower/wc. You will also find coffee and tea facilities in these cabins. Most of them have separate beds, where one can be turned into a sofa and some have double beds. Some of the cabins have more facilities than others.

Our Expeditions Suites are the most exquisite cabins on the ship. Situated on upper deck, you can enjoy the most comfortable suites on board. Inside you will find seating areas with TV, bathrooms with shower/wc and most of them have double beds. All of the suites offer cabin kits, which contains bathrobe, slippers and other beauty articles. Some of the suites do have more facilities than others.

MS Fram is designed for sailing in polar waters, holds the highest safety standards and is the perfect size for optimum nautical manoeuverability and guests' comfort. With space for only 276 guests, you are sure to get to know many of your fellow travellers. You will share stunning sights and memories of a lifetime long after returning home. The Norwegian word Fram means ‘forward’ – lifting expectations of the voyage at hand.

MS Fram was built in 2007 with one mission in mind - to bring her guests closer to nature, wildlife and unforgettable experiences. As well as offering numerous lounges in which to relax, our more active guests can use our well-equipped gym. Meanwhile, on deck, our Jacuzzis guarantee you surreal memories when passing the towering icebergs of Antarctica or Greenland. 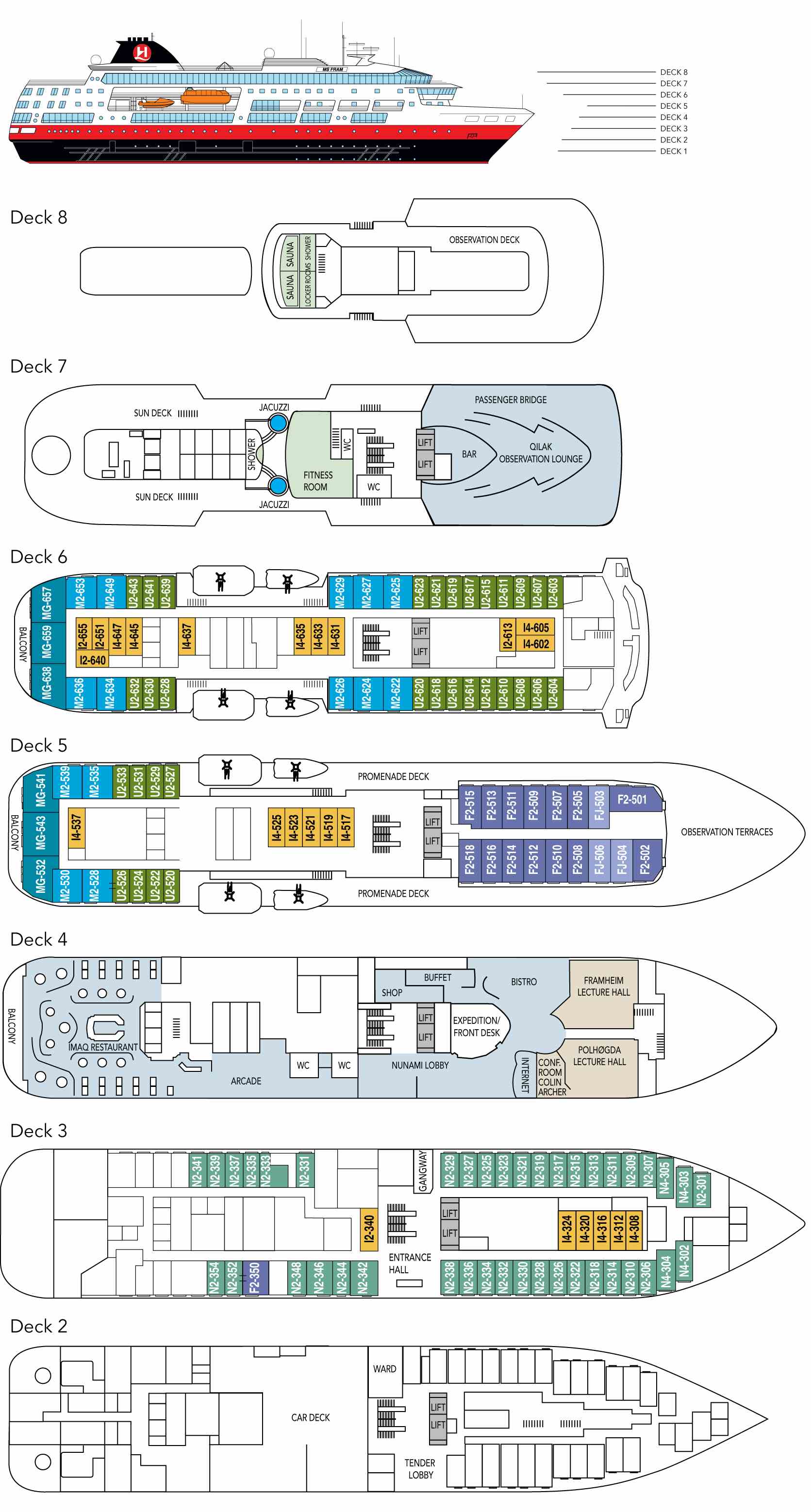 
Trip specific inclusions;
One hotel night in Edmonton incl. breakfast
Flight from Edmonton to Cambridge Bay in Economy Class
Transfer from Hotel to airport in Edmonton and airport to ship in Cambridge Bay
Expedition parka to keep
Use of boots, trekking poles and other equipment throughout the voyage
Farewell event
All meals while on board
Beverages with meals (House Beer and wine, sodas and mineral water)
Coffee and tea at all times throughout the voyage
Free wifi on board (Subject to coverage) 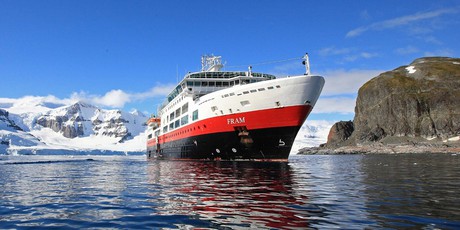 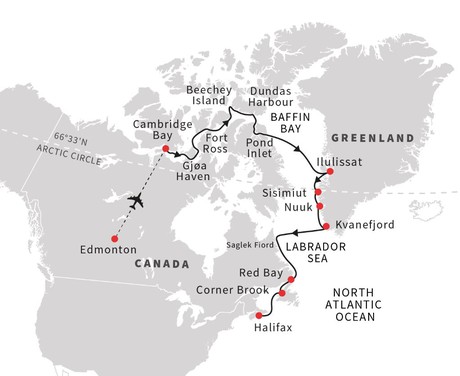