Print a pdf of this cruise
Explore the best of New Zealand's South Island natural heritage on this 7-night luxury expedition on board Le Soléal.

You will set sail from Wellington, famous for its inventive and sophisticated food scene and picturesque harbour, before reaching Kaikoura and Akaroa renowned for their wildlife encounters.

You will follow your voyage towards Fiordland National Park, which is part of Te Wähipounamu, a UNESCO World Natural Heritage Site, home to the majestic Dusky Sound, Doubtful Sound and Milford Sound. A zodiac excursion will take you to find Fiordland crested penguins, get up close to spectacular waterfalls and allow you to enjoy the vistas of the ship’s outer decks.

The last stop on your itinerary, Ulva Island in Paterson Inlet, is famous as a bird and plant sanctuary and provides an opportunity to spot some of the rarest bird species in the world alongside our team of naturalists and destination experts. Your disembarkation port is Dunedin, along the stunning Otago Peninsula, which is rich in wildlife and picturesque hinterland.

• Be inspired by landscapes on a breathtaking scale.

• Explore ancient forests untouched since the dawn of time.

• Encounter Hector’s Dolphins in Akaroa; one of the world’s rarest and smallest species.

• Gain an insight into the history, culture and incredible diversity of life from your expert expedition team.

Crowned with gentle green hills, Wellington Harbour is located in the far south of the North Island. This city offers a charming mix of traditional and modern cultures, bestowing on the New Zealand capital, a unique atmosphere, both friendly and avant-guard. Where some sites, like the large National Te Papa Tongarewa Museum, reflect the city’s Maori past, others, like the many cafés and restaurants, affirm the inhabitants’ incredible lust for life.

Located on the South Island of New Zealand, the small town of Kaikōura stretches between the South Pacific and the snow-capped Kaikōura mountain chain, in the heart of a natural and preserved environment that is home to rich and varied wildlife. The peninsular has spectacular limestone formations, and many marine mammals, such as whales, dolphins, seals and sea lions, as well as sea birds can be found near its shores. Initially populated by the original Maori inhabitants for almost a thousand years, the rocky coastlines of Kaikōura then served as an observation post for whalers between the 18th century and the beginning of the 20th century.

Set on the east coast of South Island, Christchurch is New Zealand's second-biggest city. You can soak up its easy-going atmosphere in one of the many parks and gardens that give Christchurch its nickname "the garden city", or dally a while in Cathedral Square to see how the city is transforming itself after the earthquakes of 2010 and 2011. Attractions such as the International Antarctic Centre and Christchurch Gondola ride are as popular as ever, while pop-up cafes, the Cardboard Cathedral and community art projects showcase the citizens' resilience. The beautiful port of Akaroa, where ships dock, is about 90-minute drive from Christchurch on the Banks Peninsula.

During your day at sea, make the most of the many services and activities on board. Treat yourself to a moment of relaxation in the spa or stay in shape in the fitness centre. Depending on the season, let yourself be tempted by the swimming pool or a spot of sunbathing. This day without a port of call will also be an opportunity to enjoy the conferences or shows proposed on board, to do some shopping in the boutique or to meet the PONANT photographers in their dedicated space. As for lovers of the open sea, they will be able to visit the ship’s upper deck to admire the spectacle of the waves and perhaps be lucky enough to observe marine species. A truly enchanted interlude, combining comfort, rest and entertainment.

Dusky Sound is one of the most isolated fjords in Fiordland National Park. This huge, protected natural zone situated in the south-west quarter of New Zealand’s South Island is listed as UNESCO World Heritage. The sheer cliffs, waterfalls, shimmering lakes and primitive forests here are each more beautiful than the next. These spectacular landscapes sculpted by successive glaciations are a source of endless wonder. In 1773, the British navigator James Cook spent a few weeks at Dusky Sound, as demonstrated by a plaque that can be seen at Astronomer’s Point. During your sailing, observe the richness of the local wildlife: cormorants, seagulls, New Zealand fur seals, but also Fiordland crested penguins, a rare and endemic species. Weather and time permitting you may explore the Sound from our fleet of zodiac. Referred to as the "Sound of Silence", there is a secluded serenity that surrounds Doubtful Sound in contrast with the better-known Milford Sound. Both are part of the Fiordland National Park, a UNESCO World Heritage Site. Lieutenant James Cook named 'Doubtful Harbour' in 1770 as he was uncertain if it was navigable under sail. Doubtful Sound is the deepest of the fiords with a maximum depth of 421 m. It contains three distinct 'arms' and several outstanding waterfalls in the area from Deep Cove to the open ocean. Your ship will spend time navigating around Secretary Island through both Thompson and Doubtful Sounds. You will enjoy the spectacular scenery from the outer decks.

Milford Sound fiord is among one of the most beautiful natural sites in New Zealand. So much beauty will quite simply take your breath away. Located on the south-west coast of South Island, in the Fiorldland National Park, this sumptuous inlet carved out by glaciers advances over at least 15 kilometres inland, in the Southern Alps. Majestic cliffs seem to surge out of the dark waters, rising several hundred metres high: an abrupt relief from where impressive waterfalls cascade.

Ulva Island (Te Wharawhara) is the largest of 20 islands within Paterson Inlet, Stewart Island, with an area of approx. 270 hectares. The island has never been logged and was declared pest free in 1997, becoming one of the few predator-free sanctuaries in New Zealand. The island is now a haven for many species of birds and plants that are rare, or have died out, on the mainland of New Zealand. Bird species regularly encountered include: the flightless Stewart Island Weka, South Island saddleback, yellowhead and Stewart Island robin. Ulva Island is not only a bird enthusiast’s paradise, it is also one of the few offshore islands with a largely undisturbed podocarp forest. Well-maintained tracks offer easy walking for most people providing a unique opportunity to see rare birds and plants at close quarters in a safe environment.

Dunedin is New Zealand's oldest city and is often referred to as the Edinburgh of New Zealand. This city of the south, wears its Scottish heritage with pride. The city contains some of the best preserved Victorian and Edwardian architecture in the Southern Hemisphere. The Silverpeaks hinterland to the North West provides a picturesque backdrop and The Otago Peninsula, which lies within the city boundaries, has internationally renowned wildlife reserves, including the only mainland breeding colony of Northern Royal Albatross.

Sailing under the French flag, this magnificent yacht of only 132 staterooms and suites, with balconies, joined in 2013. You will be enchanted by the contemporary decor inspired by the luxury yachting world, with fluid lines and a modern colour scheme combining natural wood with shades of grey and white.

A refined ambience is enhanced by the quality of the workmanship and materials: white Corian counters in the lobby contrast with the warmth of leather to recall a boat's hull, while the central scuplture of enamelled pieces takes its inspiration from the sea.  In the loungebar, the carpet picks up a tennis stripe theme symbolising a certain idea of cruising, one synonomous with French elegance and a chic seaside spirit. 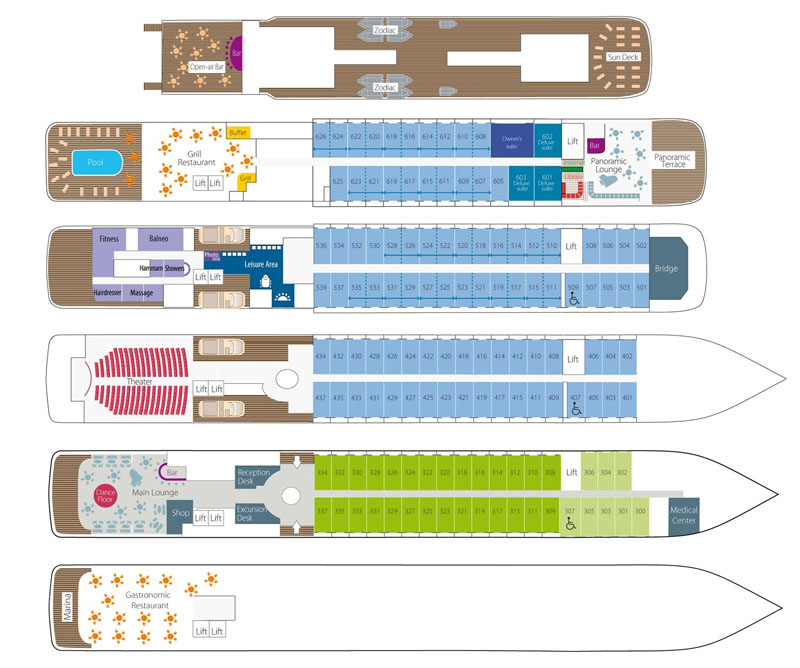 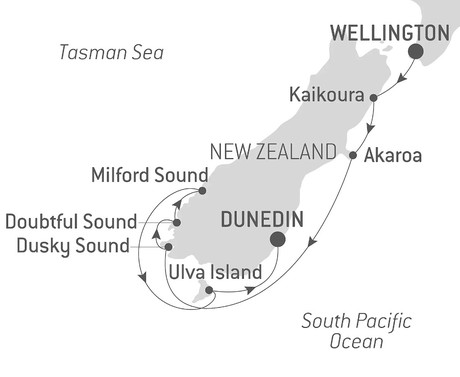