Mediterranean Gems: From Dubrovnik to Naples

Print a pdf of this cruise
Beginning in the enchanting Croatian city of Dubrovnik, take an Adriatic cruise on the alluring Sea Cloud and wind your way down the southern part of Italy’s “boot”, calling on vibrant and welcoming places steeped in ancient history. Marvel at ornate cathedrals and remarkable baroque buildings, explore great sites of antiquity—from renowned Pompeii to the less-visited Greek temples of Paestum—and meander through unspoiled clifftop towns, soaking up breathtaking views. Plus, with a little luck witness the orange glow of eruptions from the Stromboli volcano.

• Explore Greco-Roman sites, the baroque city of Lecce, and the mountain village of Gerace, and take in their vibrant life and culture

• See the Amalfi Coast, with its pastel-colored buildings and stunning vistas

• Visit Pompeii, abruptly destroyed by Vesuvius in the year 79, and witness its extraordinarily well-preserved homes

• Enjoy a private dinner at Castello degli Schiavi, an 18th-century castle used as a locale for the Godfather films

Marvel as the ship’s billowing sails are raised the old-fashioned way, by hand, and the ship heads across the Adriatic Sea. Hear presentations from our experts, catch up on reading and experience Sea Cloud’s legendary five‐star service.

We stop at the picturesque Adriatic town of Otranto, whose idyllic seaside appearance contrasts with its turbulent past. We’ll explore the cathedral, which has a large, intricate, fanciful 12th-century mosaic floor depicting real and mythological animals, a tree of life, historical figures and biblical scenes. The cathedral is also noted for the chapel with the skulls and bones of more than 800 martyrs of the Turkish invasion of 1480. We’ll also walk the medieval walls for great views of the Aragonese Castle, the town and the sea. We continue to Lecce, the “Florence of the South”, to explore its remarkable 17th-century baroque architecture and its narrow pedestrian streets and grand plazas on a walking excursion. Some of the greatest architectural masters of the time competed to see who could create the most beautiful buildings, and the highly fanciful, ornamented style was given its own name: “Lecce Baroque". Our walking tour of Lecce shows us the Basilica di Santa Croce and adjacent Palazzo del Governo; the extraordinary Piazza del Duomo, with its cathedral and the Palazzo Vescovile; and the 2nd-century Roman amphitheater. After visiting Lecce, we return to our ship and sail into the Ionian Sea.

We spend the morning with sails unfurled in the Ionian, sailing across the southern part of Italy’s “boot”. Anchoring of Roccella Ionica, we drive to the hilltop village of Gerace, which occupies a spectacular setting facing the mountains and valleys of Calabria on one side and the sea on the other, with great views from near its ruined Norman castle. Gerace offers a glimpse of small-town life in southern Italy, with its relaxed atmosphere, stone buildings, and winding streets. We’ll explore the borgo antico (old town) and visit the cathedral, dating from 1045, which is in Romanesque-Norman style. It has an interesting small museum with a crown of gold and precious stones and a fabulous silver monstrance. We then return to Sea Cloud and sail toward Sicily.

Siracusa was the great rival to Athens, and its archaeological park features one of the largest theaters of antiquity. Its 15,000 seats are hewn out of bedrock, and the theater is still in use today. We also visit the nearby limestone quarry, the cave of “Dionysus’ Ear”, and the Roman amphitheatre before returning to Sea Cloud for lunch. The afternoon features a walk through the medieval island town of Ortygia. The town is magical, with numerous little piazzas and narrow alleys, but the main feature is the Duomo, or Cathedral, which was built from the ruins of the ancient Temple of Athena. The history of Sicily can be told in the walls of this incredible construction. There will be time for you to explore on your own, if you're so inclined.

In the morning, we drive up to the intoxicatingly beautiful town of Taormina, perched 250 meters above. With Mount Etna dominating to the south, this stunning medieval town boasts the now-fashionable walk on the pedestrian Corso Umberto, lined with exquisite buildings, and ends at the Greco-Roman Theater. This unforgettable theatre was built right into the cliffside, overlooking the vast sea below, in the 3rd century BC. This evening, a special treat: a private dinner at a privately owned castle, the Castello degli Schiavi. This phenomenal 18th-century home was the setting for many scenes in the Godfather films, and we’ll meet members of the family that owns it and explore the extensive buildings and grounds. We return after dinner to Sea Cloud, which has been at anchor under the watchful gaze of Mount Etna.

In the early hours of the morning, we pass through the narrow Strait of Messina, which separates Sicily from the “boot” of Italy. It’s the purported location of Homer’s monsters Scylla and Charybdis, the rock and the hard place through which Odysseus had to sail. The Aeolian Islands are not only famous for the winds of the god Aeolus, but also for some of the most well-known classical volcanoes. We’ll set sails in the morning with the islands of Vulcano and Stromboli in view, anchoring for the afternoon at Lipari. Here we’ll go ashore for a drive around the perimeter of the entire island, with spectacular views of the other Aeolian volcanoes, before returning to the main town. We visit the small but surprising archeological museum that has an extensive collection of Neolithic artifacts made from the local obsidian, which was also the foundation of the island’s prosperity during the Greco-Roman era. This evening, we’ll have dinner on deck as Sea Cloud cruises the 25 miles to Stromboli, and with a little luck we’ll see some of the pyrotechnics of this active volcano.

We spend the morning with Sea Cloud’s sails aloft. In the afternoon, we visit Amalfi. This storied town, part of the World Heritage site that comprises the entire Amalfi Coast, has a glorious aspect, with pastel-hued houses clinging to the steep-sided mountains that comprise this indented stretch of coastline. Its pleasures are many: strolling the waterfront, with its marina and shops; visiting the ornate cathedral, with bronze doors dating from 1066; and just wandering the winding streets and alleyways to make your own discoveries. After taking time to explore Amalfi, we’ll drive up hairpin curves to Ravello, which overlooks the coastline from high above, offering great views. Ravello has long been a haunt of artists and intellectuals, including Andre Gide, Gore Vidal, Richard Wagner, Greta Garbo, John Maynard Keynes, and D.H. Lawrence (who wrote Lady Chatterley’s Lover there). We’ll explore the Villa Rufolo, originally built in the 13th century and restored by a Scotsman, Francis Neville Reid, in the middle of the 19th century. It has gardens, stately buildings, a tower to climb if you wish, and vistas of Amalfi and other towns below. After visiting Ravello we return to Amalfi.

Anchoring off the town of Agropoli, we drive to Paestum, a World Heritage site with some of the finest and best-preserved Greek temples anywhere. Founded about 600 BC by Greeks from Sybaris and called Poseidonia, it became a thriving city. Today, the three magnificent Doric temples—known as the Temple of Neptune, the “Basilica” of Hera, and the Temple of Ceres—can be explored up close. The Temple of Neptune (a misnomer, as it was likely dedicated to Hera) is especially intact, and allows you to imagine what it must have been like 2,500 years ago. It’s large and extremely graceful, with elegant rows of columns. The nearby museum has a superb collection of statues, paintings and reliefs from the site, many of them richly evocative in how they depict life in ancient times. After exploring Paestum, we return to Sea Cloud and spend the afternoon sailing the Tyrrhenian Sea.

The story of Pompeii is well known: when Vesuvius erupted on August 24 of 79 AD, this thriving, elegant, wealthy Roman city of close to 20,000 was buried in pumice and ash. Pliny the Younger wrote “Darkness fell, not the dark of a moonless or cloudy night, but as if the lamp had been put out in a dark room”. Some 2,000 citizens perished. Pompeii would not be rediscovered for some 1,500 years. Its buildings and other structures are in a remarkable state of preservation, allowing us to visualize with precision what life was like for the inhabitants. Exquisite wall paintings and some ancient graffiti tell us their preoccupations. Walking the 2,000-year-old streets, we’ll explore some of Pompeii’s villas, the forum, the splendid amphitheater (which seated 12,000), along with its temples. Visiting here’s it’s impossible not to think about how you might have lived had you been born into that era. Returning to Sea Cloud, we raise the sails a final time this afternoon as we sail the Bay of Naples. We’ll have a farewell dinner to toast our voyage.

We arrive in Naples this morning and disembark. Transfer to the airport for flights home, or join our two-day optional extension exploring historic Naples.

All day-by-day breakdowns are a sampling of the places we intend to visit, conditions permitting.

Sea Cloud is a ship with a soul, imbued by the original owners, Marjorie Merriweather Post and her husband E.F. Hutton in the 1930’s. The ship has played host to royalty, known service in wartime, and sailed the world over. She is a vessel of incomparable grace that harks back to the golden age of ship travel. Once you’ve been on Sea Cloud under full sail, you’ll begin your own love affair.

Welcome aboard a legend
Sea Cloud accommodates 58 guests in 28 outside cabins including two original owner’s suites that still feature original marble baths and fireplaces. At 360 feet she is an expansive ship with extensive public spaces on the top deck, where we luxuriate in deck chairs and watch the crew of 18 go aloft in the web of riggings to hand-set her 30 sails. Her dining room is hung with marine oil paintings of the period and accommodates all guests at once for a single seating. We’ll gather in the lounge each evening for Recap. Life aboard is a uniquely pleasing mix of elegance and informality—a return to the golden age of sailing in shorts and deck shoes. You’ll find all shipboard services impeccable.

Discover the romance of tall ship sailing
Experience something many people don’t know exists in the 21st century—the romance of life under square sails. Discover the thrill of standing on deck as Sea Cloud gently glides through the water, her crew aloft in the riggings, running out and reefing sails. Settle in to your favorite areas on the top deck and bask in the incomparable experience of traveling aboard the finest tall ship to ever sail the seas. Lose yourself in an adventure that, in this day and age, is almost unimaginable.

Please note deck and suite plans are indicative only and may vary slightly. 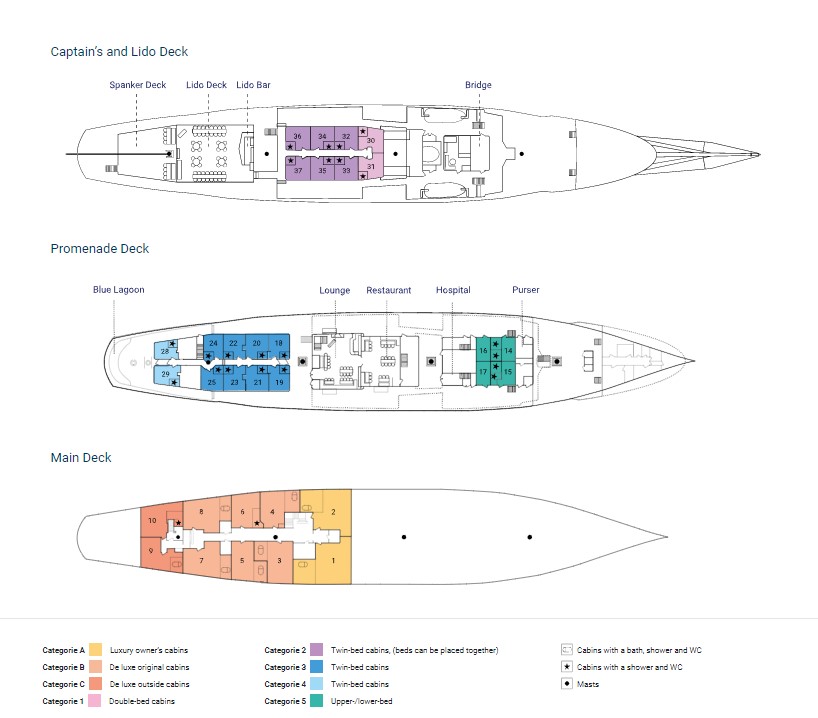 2 Days. On our two-day extension, we’ll show you a great deal of Naples’s essence. You’ll see the historic center, a World Heritage site, with one astonishing work of art and architecture after another.

• Voyage on board in selected cabin category
• All meals while on board
• Non alcoholic beverages
• Experienced expedition team and leader
• All excursions
• Zodiac and kayak exploration
• Snorkeling, including wetsuits, masks, fins & snorkel where relevant
• Lectures and presentations on board
Trip specific inclusions;
Alcholic beverages (Excluding premium brands) 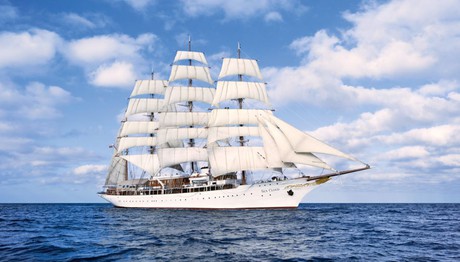 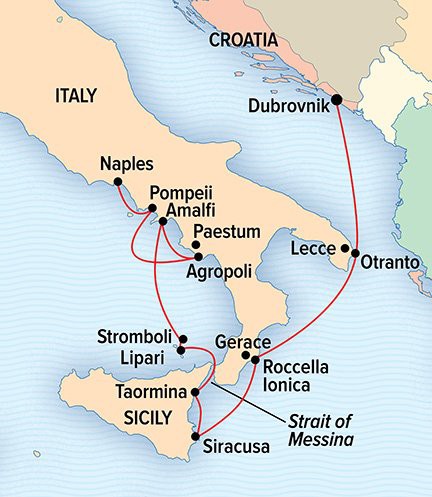