Print a pdf of this cruise
THE CHUKOTKA, KORYAK AND KAMCHATKA COASTLINE

The eastern seaboard of Russia dominates the North Pacific and yet very few people know anything about it, let alone have experienced it. This isolation has protected one of its most valuable assets - its wilderness and to some degree, its wildlife.

The area was considered an important ‘frontier zone' during the Cold War, so it was off-limits to foreigners. Even Russians had to get special permission to travel here. These limitations were changed in 1991/92 with Perestroika but that didn't make it more accessible. If anything it is probably less accessible now than it was, as there are fewer people living in the region and the state-subsidised transport system has collapsed. There is no money to replace the ageing fleets of aircraft and ships and few people can afford the prices that are charged to travel in this region today. This makes it the perfect destination for Expedition Cruising.

In the winter much of the shoreline is choked by ice. During spring and summer the region is a hive of activity. In September the thousands of birds that migrated here to take advantage of the phenomenal abundance of food will be preparing to leave. The reindeer and mountain sheep will be feeding in preparation for the harsh winter, while fat Kamchatka Brown Bears, which have fed extensively on berries in the early summer, then feasted on salmon in the rivers and creeks, will be dozing in the late summer sunshine. Late summer and early autumn is a beautiful time to discover this wilderness. The onset of autumn paints vibrant colours on the tundra cloaked hillsides making the landscape a picture perfect postcard.

On this journey from Anadyr to Petropavlovsk-Kamchatskiy we will make numerous landings along these remote coastlines so that you can discover for yourself this untamed and beautiful landscape. We will select sites that few people visit such as river mouths, fiords, bays and islands that in our experience offer the natural history enthusiast, the photographer, the historian and travellers the most unique of opportunities. Come with us and discover the jewel that is the Russian Far East.

For those departing Nome, Alaska your adventure begins with a flight across the Bering Sea and International Date Line, to the remote port of Anadyr.

All expedition members will arrive in Anadyr, the administrative centre of the Chukotka region, and transfer to your expedition vessel.

We spend the day in and around the town of Egvekinot on the shores of Kresta Bay. The town was built by Gulag prisoners who were then forced to construct a road to the mine. We explore the town which has an excellent museum, the road and tundra as well as visit the Arctic Circle.

This coastline is rich in marine mammals and one creature we will be looking for, in particular, is the walrus. The bukhta (or bay) was named after Commander Vitus Bering’s ship, the St Gabriel, of the First Kamchatka Expedition. Behind the expansive beach there is a lagoon we can explore for waterfowl and waders.

We start the day with a visit to the delta of Pika River – a well known walrus haul out. Later in the day, we visit Meinypil’gyno, a small settlement located on a 40km long shingle spit. It is a traditional village although renovated under the recent Chukotka government; we enjoy local hospitality from the village ensemble who perform some of their traditional dances for us.

Along the Koryak Coast there are many beautiful fiords (bukhtas or bays) and none are more beautiful than Bukhta Natalii. This fiord has two smaller fiords that drain into it from the south. We hike from one bay to another whilst surrounded by the magnificent mountain landscapes and tundra vegetation.

Much of the southern Govena Peninsula was recently made into a state reserve. There are a number of fiords included in the reserve; one of the most spectacular is Tintikun Lagoon which is one of the most picturesque locations found anywhere in the world. A large population of brown bears inhabits this area, if we are fortunate we should see a number of them.

We will start the morning in Kamchatka Brown Bear country, an undisturbed habitat within the Koryakskiy Reserve, where we will go bear watching. Brown bears frequently visit this area which is completely protected and rarely visited. In the afternoon we visit Verkhoturova Island where Tufted and Horned Puffins, Pigeon, Common and Brunnich’s Guillemots and also Parakeet and Least Auklets can be seen. On nearby rocky islets there is a regular non-breeding haul out of Steller Sea Lions.

A few miles to the south of Verhoturova Island is the much larger Karaginskiy Island. Here we encounter some of the first ‘forests’ of the voyage. This is a change from the tundra that we have seen, a sure sign that we are getting further south. Autumn is the best time for the wild berries and we can marvel at the richness of the local flora, as many of them should be at their best.

The wildlife-rich Commander Islands were first discovered by Commander Vitus Bering when his ship was wrecked here in 1741. He perished on the island along with many of his men. The reports from those that survived led to a ‘fur rush’ and the settlement of the islands. There are two large islands (Bering and Medny) with two smaller islands Ariy Karmen and Toporkov. We intend to explore the islands through a combination of landings and Zodiac cruises. We plan to stop at the village of Nikolskoye. We visit the fur seal rookery at North-West Cape and Zodiac cruise around the impressive bird colony at Ariy Kamen. We will also possibly visit the gravesite of Commander Vitus Bering or the remarkable Medny Island.

Olga Bay is a part of the very large Kronotskiy Reserve, which also includes the world-famous Valley of the Geysers. The habitat has lush Kamchatka forests coming right down to the beach. The area around Olga Bay is frequented by large numbers of Gray Whales that are usually quite friendly to visiting boats. The rising volcanoes in the background here provide a beautiful setting to explore real Kamchatka wilderness.

This morning we make our way along the Zhupanova River by Zodiac. This journey allows us to explore a river habitat which is common in Kamchatka. Steller’s Sea Eagles are known to nest in the lower reaches of the river.

During the night our expedition vessel will enter Avacha Bay which is one of the greatest natural harbours in the world. There will be a complimentary transfer to the airport or to a central downtown hotel.

• International and Domestic flights, both commercial and charter
• Travel insurance
• Passport and visa costs if applicable
• Beverages on board
• Gratuities
• Any items of a personal nature including laundry
• Private charter flight Nome to Anadyr $1,000pp 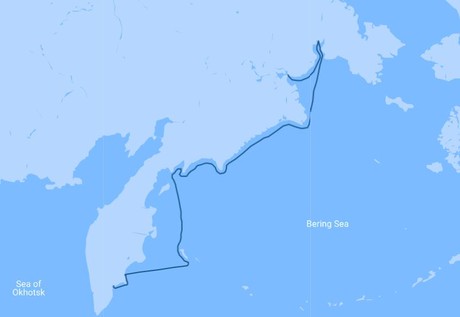