Print a pdf of this cruise
The Pacific Ring of Fire manifests itself in numerous places on the rim of the Pacific Ocean - but nowhere more dramatically than in Russia's Far East. Along one of the world's most active plate boundaries, the Pacific plate subducts under the North American plate and the resulting volcanic and geothermal activity has built a unique and amazing landscape. Upwelling from the deep trenches formed by this action and currents around the many islands creates perfect conditions for seabirds and cetaceans. Consequently the area is one of the richest in the world, both in terms of the number of species, which can be seen, and their sheer abundance. For many birders, the undoubted highlight is the auks and during our voyage it is possible to see up to fourteen species including Tufted and Horned Puffins, Parakeet, Whiskered and Rhinoceros Auklets, as well as Spectacled and Pigeon Guillemots. Other seabirds we regularly encounter include Laysan Albatross, Mottled Petrel, Fork-tailed Storm-Petrel, Red-faced Cormorant, Red-legged Kittiwake and Aleutian Tern. For those keen on cetaceans we can reasonably expect to see Fin, Sperm, Humpback Whales as well as Orca (Killer Whale), Baird's Beaked-Whale and Dall's Porpoise. The region's human history is equally interesting and fascinating. The original settlers were the Ainu and Itelmen. They were displaced with the arrival of the Cossacks in the 18th century after the Explorer Vitus Bering had put the region on the map. The Soviet empire encompassed the region and at the height of the Cold War, Russia's formidable Pacific Fleet was based here. The secrecy surrounding the fleet resulted in the region being ‘closed' even to Russians who had to get special permits to travel to and within the area. It is only now, two decades since Perestroika, that people can travel relatively freely here, although there is still very little in the way of infrastructure for visitors. The region we explore on this expedition falls into three quite distinct and unique geographical regions: the Kamchatka Peninsula; the Commander Islands (the western extremity of the Aleutian chain of islands) and the Kuril Islands. Each region is very different. Each has its own story and in many cases localised plants and birds. Join us as we go in search of those people, plants, animals and birds that make this part of the Pacific Ring of Fire so special.

This morning we board a coach for transfer to the Port of Korsakov some 40 minutes south of the city of Yuzhno-Sakhalinsk where we will board the Spirit of Enderby. Once on board you will be shown to your cabins and there will be a chance to unpack and explore the vessel. There will be briefings and introductions to the ship, staff and crew after we sail.

Kunashir is the largest island in the Kuril chain. We plan a landing in the Kurilsky Reserve and will explore an extensive area of woodland, where there are some good walks and birding. Species we could encounter include Latham’s Snipe, Oriental Turtle-Dove, Oriental Cuckoo, Japanese Bush-Warbler, Eastern Crowned Warbler, Narcissus and Brown Flycatchers, Siberian Stonechat and Long-tailed Rosefinch.

This morning we land at the small settlement of Kurilsk from where local buses/trucks will take us into the volcanic highlands to thermal hot pools where you can enjoy a soak or go birding. Possible species include Kamchatka Leaf-warbler, Japanese Robin, Siberian Accentor, Pine Grosbeak and Japanese Bush-warbler.

This morning we explore Urup Island, it is a chance to stretch your legs on an extended walk, beachcomb and look for Sea Otters or birds in the forest behind the beach. This afternoon depending on weather we will either Zodiac cruise or land on Chirpoy Island where there are some dramatic volcanic landscapes and headlands covered in breeding seabirds.

We will enter a flooded caldera at the northern end of Simushir Island where a once top secret Soviet submarine base lies abandoned. In the surrounding area look for Siberian Rubythroat, Eurasian Nutcracker, Pine Grosbeak and Japanese Grey Bunting. Our visit to Yankicha Island is likely to be one of the highlights of the voyage as the number of alcids which breed here is incredible, with spectacular concentrations of Crested and Whiskered Auklets.

This morning at Toporkovy Island in the shadow of the active Matua Island volcano we can expect to find Harlequin Ducks, Red-faced Cormorants, Tufted Puffins and Brunnich’s Guillemots. Ashore we could encounter Grey-tailed Tattler, Middendorff’s Grasshopper Warbler and Black-faced Bunting.

This morning on Onekotan Island we can stretch our legs through an amazing field of wild flowers as we walk to Black Lake. Our landing on Atlasova Island is great for birders and non birders alike. There are the remains of a Gulag to explore and numerous species to see. Later today we will pass through Second Kuril Strait which has one of the highest densities of Sea Otters in the Kuril Islands.

In this deep fiord on the Kamchatka Peninsula we will look for the endangered Kittlitz’s Murrelet as well as Long-billed Murrelet. We plan a short excursion at the head of the fiord where there is a chance of seeing brown bears. At the entrance to the fiord where we can Zodiac cruise there are almost always Orcas and Steller Sea Lions.

We will spend several hours in the Zodiacs cruising on the scenic Zhupanova River where we should get great looks at Steller’s Sea Eagles as the birds often nest in the trees adjacent to the river. Other highlights could include Far Eastern Curlew, Long-toed Stint, Kamchatka Gull and Aleutian Tern. There is also a major salmon fishery on the river which we can visit.

There are two main islands in the Commander group, Bering and Medny, and during our two days we will explore several sites combining the best of the natural and cultural history. There is an excellent chance of finding Rock Sandpiper, Mongolian Plover, Pechora Pipit and Grey-crowned Rosy-Finch, as well as the endemic subspecies of Arctic Fox. Zodiac cruising can be extremely rewarding here with several species of auklets as well as the Red-legged Kittiwake. The area is also extremely rich in marine mammals. Potential species include Sperm, Humpback, Northern Minke and Baird’s Beaked-Whales, as well as Orcas, Steller Sea Lions, Northern Fur Seals and Pacific Sea Otters. We include a visit to the small settlement of Nikolskoye and the local museum.

As we cruise across the Kamchatka Trench towards Petropavlovsk-Kamchatskiy we will keep a look out for the cetaceans that this area is well known for. It is a good time to be on deck as the birding can be good, but we will also need to wrap the expedition, so there will be recaps and formalities to attend to. This evening there will be a farewell dinner.

During the night the Spirit of Enderby will enter Avacha Bay which is one of the greatest natural harbours in the world. There will be a complimentary transfer to the airport or to a central downtown hotel.

A message for the keen birders and cetacean watchers reading this. Space doesn't allow us to list all species on a day-by-day basis in this itinerary. Please contact us for an expedition dossier or a bird and mammal list from previous expeditions.

Join experienced kayakers Judd Hill and Al Bakker as we launch our kayaks from the Spirit of Enderby which acts as a floating base camp for special excursions and shore landings. Cruising in a small group of about 6 to 10 paddlers, we will generally visit the same sites as the Zodiacs but be more independent and perhaps access areas not appropriate for Zodiacs. If the ship’s schedule allows, it may be possible to do an extended day trip, taking our lunch with us.

• International and Domestic flights, both commercial and charter
• Travel insurance
• Passport and visa costs if applicable
• Beverages on board
• Gratuities
• Any items of a personal nature including laundry
Trip specific exclusions;
Local Payment USD$500.00pp 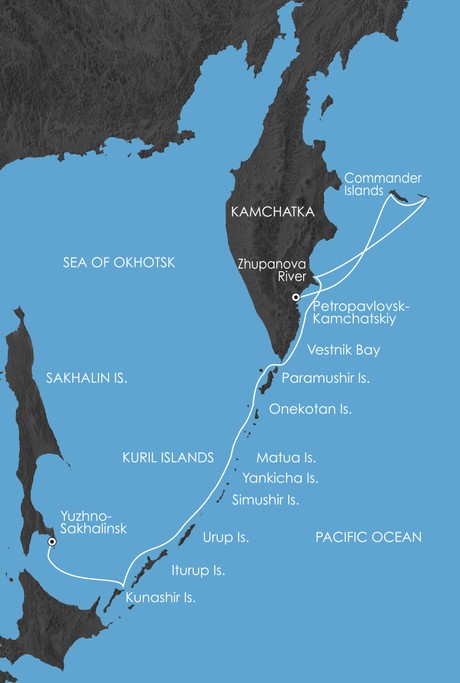 • Visit Commander Bay, where Vitus Bering was shipwrecked and is buried

• Atlasova Island: Explore the remains of a Gulag