At the Heart of the Greek Islands

Print a pdf of this cruise
With this exceptional itinerary, PONANT invites you to enjoy a wonderful interlude discovering the cultural and natural treasures of the Cyclades and the Dodecanese. From Athens, set sail aboard Le Lyrial for an 8-day cruise to the most beautiful Greek islands of the Aegean Sea and delight not only in the rich cultural heritage but also in refreshing dips in the turquoise waters of the archipelago.

You will discover Patmos, known as the “Jerusalem of the Aegean Sea”. This island, where Saint John is said to have written the Apocalypse, offers unique landscapes combining white sandy beaches and rocky coves.

After a stopover on the small island of Symi, which will not fail to dazzle you with its discreet beauty and Italian-style neoclassical houses, you will head for the Cyclades. Amorgos, or the island of the Big Blue as it is known, is a raw gem. You will admire its volcanic and mountainous landscapes that rush into the crystal clear waters that surround it.

Le Lyrial will then approach the Santorini archipelago in an incredible cruise along the foot of its caldera formed during an eruption in around 1600 BC. Sublime white villages such as Thera and Oia are built on top of the cliffs falling vertically into the sea.

You will then make a stopover on the authentic and picturesque Folégandros before reaching Delos, a minuscule island in the Cyclades archipelago. According to mythology, Apollo was born here. Like an open-air museum, Delos offers unique testimony of the civilisations that followed one another in the Aegean world.

Next comes Mykonos, its beaches and windmills, with Alefkandra, a district that is typical of the island, with houses built right on the water’s edge. Le Lyrial will make a final stopover on the island of Hydra, famous for its incomparable light, before heading towards the Greek capital.

Your cruise will end in Athens, the mythical city dominated by the Acropolis and its monuments that form the most extraordinary architectural and artistic collection bequeathed by Ancient Greece to the rest of the world.

The Greek capital city is located on the edge of the Saronic gulf, in the east of the country. It bears a plural name in reference to the first villages that surround the Acropolis. You will be enchanted by the rocky plateau presided by its monuments listed as UNESCO World Heritage. In the city below, you can visit some of the liveliest districts in Athens: Plaka, with its maze of colourful streets, and where, in the evenings the drifting aroma of moussaka and garlic prawns will tickle your taste buds. The National Archaeological museum and the Cycladic Art Museum are also some of the city’s key attractions and allow visitors to discover Athens’ cultural past.

Patmos is one of the legendary must-see islands in the Dodecanese. This is where Saint John resided, presumed author of the last book in the Bible. The cave of the Apocalypse and the Saint John Monastery are dedicated to him. These sites, which are listed by UNESCO as World Heritage, are located at the top of a hillside planted with vines and orchards. On the shore, the crystalline coves of Kambos and Lampi offer absolutely gorgeous swimming areas.

A simply ravishing gem in the Dodecanese, Symi is located north-west of Rhodes. This island of cypress forests, vineyards and olive orchards, possesses a capital city of the same name that is as colourful as the surrounding countryside. The charm of the port district of Gialos is not to be missed: its quaysides are lined with picturesque houses with multi-coloured facades. You can get to the upper town by car or climb the 500 steps up the Kali Strata ramp. The second option offers superb viewing points of the coast and gorgeous turquoise waters.

It’s no accident that the island of Amorgos was chosen as a shooting location for Luc Besson’s film, The Big Blue. You too will fall under the charm of this island as your ship edges closer. Amorgos is the most easterly island in the Cyclades and stands out for its rocky inlets with crystal-clear water and its small, picturesque villages. This port of call will be your chance to visit one of the prettiest villages in the Cyclades, Chora, and discover its cobbled streets and whitewashed houses overlooked by a castle. Byzantine churches, windmills and courtyards brimming with flowers complete this typical tableau of timeless Greece.

Sailing in the waters of Santorini caldera is breathtaking. The gigantic scale of the unique setting, the majesty of the high cliffs surrounds this ancient crater that was flooded in 2000 years before Christ, is one of the highlights of the cruise. The colourful whites, greys, reds of the volcanic rocks, the blue of the Aegean Sea and the immaculate perched villages form a unique and marvellous spectacle. Folegandros is a treasure concealed in the Cyclades archipelago. You approach this mountainous island from the south-east side of continental Greece. The blue and white houses built on a steep plateau in its main town, Chora, is a feast for the eyes. Why not climb up to the belvederes and admire the view of the Aegean and the port of Karavostasi. The jetty in Karavostasi port leads to a lovely beach where you can have fun in the turquoise water. Higher up, Ano Meria, a village surrounded by terrace farms, offers a magnificient panorama over the sea.

This legendary Cyclades island of Delos stands just a few miles southwest of Mykonos. The ceremonial solemnity of this ancient holy sanctuary will not leave you indifferent. The sheer size and importance of this UNESCO World Heritage site which covers over half of the island is thrilling in itself. From the Stoa of Antigonos, the Terrace of the Lions, to the carved marble animal statues, you will make discovery after discovery, against a backdrop of the Aegean stretching to the horizon. The theatre steps on the hillside are a particularly good place from which to enjoy the expansive view. Nicknamed “little Venice”, Mykonos is famous for its Alefkandra district where houses are built right on the water’s edge. Their multi-coloured loggias are emblematic of this Cyclades island, as are the pelicans and windmills. You can get close up to the birds on the quaysides of the old port. Up on the hillside, you can see the windmill sails turning. In the cobbled streets of the pedestrian centre, bougainvillea bedeck immaculate facades. As you weave in and out of the little streets, snatches of coastline will undoubtedly call you to the island’s beaches, the quietest of which can be found on the northern coast.

This unusual gem belonging to the Saronic islands is located to the east of the Peloponnese. There are no cars here. Named after the island, the harbour town is layered up the slopes of a mountainous bay. You may be surprised to see beautiful stone mansions. These are traditional here, as are the multi-coloured caïques along the quays. Further along the shore, you will discover the Historical Archives Museum. Collections from Athens National History Museum are exhibited in the elegant villa Koundouriotis.

The Greek capital city is located on the edge of the Saronic gulf, in the east of the country. It bears a plural name in reference to the first villages that surround the Acropolis. You will be enchanted by the rocky plateau presided by its monuments listed as UNESCO World Heritage. In the city below, you can visit some of the liveliest districts in Athens: Plaka, with its maze of colourful streets, and where, in the evenings the drifting aroma of moussaka and garlic prawns will tickle your taste buds. The National Archaeological museum and the Cycladic Art Museum are also some of the city’s key attractions and allow visitors to discover Athens’ cultural past.

A sleek silhouette, a welcoming intimate atmosphere, discover aboard this new ship the philosophy that has made our sisterships such a success: the spirit of Yacht Cruises.

Sailing under the French flag, this magnificent yacht of only 122 staterooms and Suites, with balconies, will join our fleet in April 2015. You will be enchanted by the contemporary decor inspired by the our destinations and the blue light of the Vega star in the Lyra constellation. The result is a subtle variation around a palette of blues, ranging from the  luminous delicate grey-blue of the Polar ice to splashes of the vivid turquoise blue found in  Mediterranean coves

A refined ambiance is enhanced by the quality of the workmanship and materials: white Corian counters in the lobby contrast with the warmth of leather to recall a boat’s hull, while the central sculpture of enamelled pieces takes its inspiration from the sea. In the loungebar, the carpet picks up a tennis stripe theme symbolising a certain idea of cruising, one synonymous with French elegance and a chic seaside spirit. 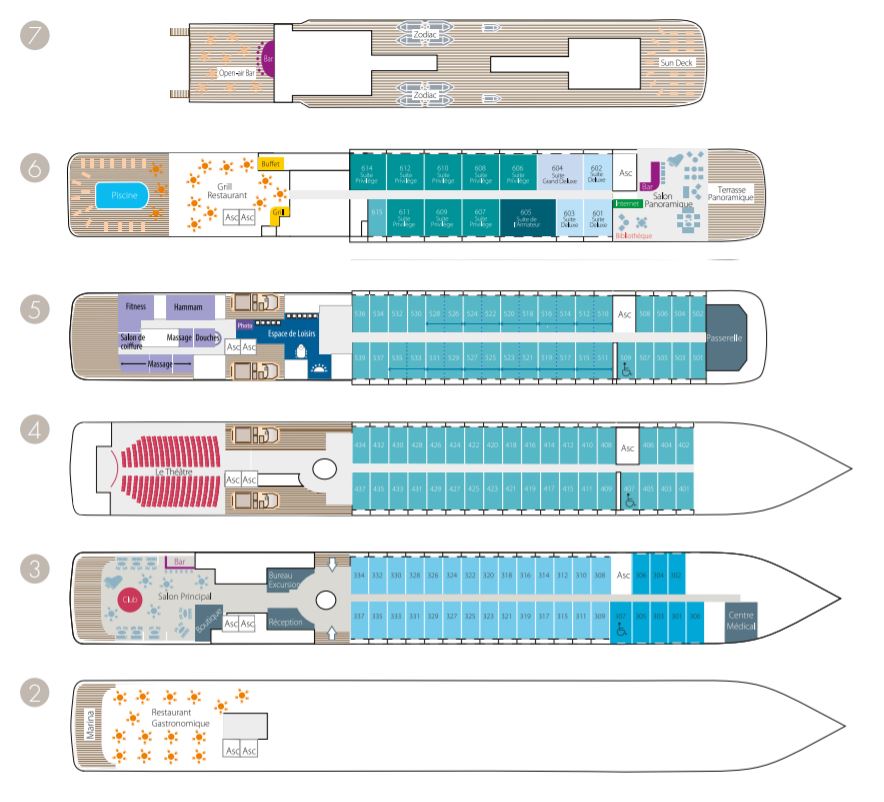 Up to 30% Off - Ponant Bonus. Prices online do not show the discounted rates. Terms and Conditions apply, special offer is subject to availability, please contact us for more details. 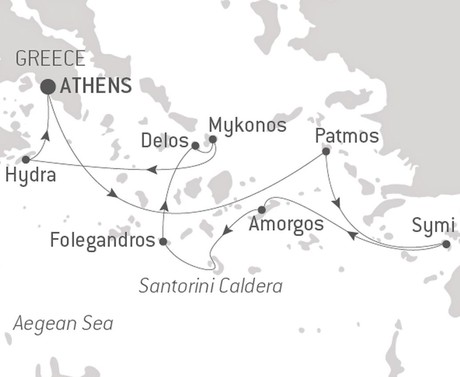 • A cruise in the Aegean Sea to discover the Greek Islands.

• UNESCO World Heritage Sites: the Acropolis in Athens (embarkation port), Delos, the sacred island, the monastery of Saint John and the Cave of the Apocalypse in Patmos.

• Discover the pearls of the Cyclades: Amorgos, the Santorini Caldera, Folegandros, Delos, Mykonos and their ancient ruins, typical landscapes and beaches.

• Exceptional sailing in the Santorini caldera.