Print a pdf of this cruise
Our complete itineraries are developed for the benefit of our passengers, who will have the opportunity to combine hiking, snorkeling, beach and kayaking; our professional guides will introduce you to the most relevant sites on each island.

In the morning: In the morning: San Cristobal airport arrival You will arrive at San Cristobal Island in the morning. After passing through immigration and baggage claim, you will be met by a Grand Majestic staff member and transferred to the yacht. You will be shown to your cabin where you will have some time to settle in before lunch and a welcome briefing. In the afternoon: In the afternoon: Jacinto Gordillo Breeding Center “La Galapaguera” Breeding Center Jacinto Gordillo - “La Galapaguera”, in Cerro Colorado, is a new visitor site in the southeast part of San Cristobal Island and can now be reached in roughly one hour by road from Puerto Baquerizo Moreno. On the trees and shrubs surrounding the site, you may see land birds like warblers, finches and mockingbirds. Giant tortoises can be observed on the trails. They live there wild but in a protected area to ensure their survival by sealing them off from introduced predators like pigs and goats.

In the morning: In the morning: North Seymour In North Seymour you may see Galapagos sea lions, blue-footed boobies, and magnificent frigate birds which are abundant on this island. North Seymour was formed by a series of submarine lava flows containing layers of sediment that were uplifted by tectonic activity. The island is characterized by its arid vegetation zone. In the afternoon: In the afternoon: Black Turtle Cove Visit Black Turtle Cove in the northern part of Santa Cruz. This inlet is surrounded by mangroves and is only accessible by dinghy. The shallow cove is a haven for young marine life. Black-tip and white-tip reef sharks, sea turtles, and a variety of rays are often spotted here.

In the morning: In the morning: Pinnacle Rock You will head to Bartholomew Island where the famous Pinnacle Rock is found. Bartholomew consists of an extinct volcano with a variety of red, orange, black and even green volcanic formations. We will take a trail of stairs to the summit of the volcano (about 30 or 40 minutes) where you will enjoy one of the best views of the islands! You will also visit a small, beautiful beach surrounded by the only vegetation found on this barren island. The beach is perfect for snorkeling where you may even see and swim with Galapagos penguins. In the afternoon: In the afternoon: Egas Port Egas Port, also known as James Bay, on Santiago Island is home to the curious Galapagos hawks and quick-footed Galapagos lava lizards. The trail leads to the coastline with gorgeous tide pools and grottos full of fauna. Here the Galapagos furseals bathe in the sun. This is also a great snorkeling site.

In the morning: In the morning: Tagus Cove In the morning, you will visit Tagus Cove on Isabela Island which is located across from Fernandina Island, near the Bolivar Channel dividing the two islands. This spot has been frequented by ships since the 1800s, using the area as an anchorage site. Trails winding by Lake Darwin up to a ridge display wonderful views. In the afternoon: In the afternoon: Urbina Bay Urbina Bay is located at the base of Alcedo Volcano on the west coast between Tagus Cove and Elizabeth Bay. This area experienced a major uplift in 1954 causing the land to rise over 16 feet. The coast expanded half a mile out leaving marine life stranded on the new shore. This area is also a great place for snorkeling.

In the morning: In the morning: Espinoza Point Crossing the Bolivar Channel that divides Isabela and Fernandina Islands, you will land at Espinoza Point, and after walking past a colony of marine iguanas and a group of sea lions, you will reach the island’s highlight: the flightless cormorant nesting site. This area also provides a great opportunity to see the Galapagos hawk. In the afternoon: In the afternoon: Vicente Roca Point Comprised of two separate coves, Vicente Roca Point is a large bay with spectacular sea life. Keep an eye out for seahorses, sea turtles, and the strange yet fascinating Mola mola (or sun fish) while you snorkel.

In the morning: In the morning: Espumilla Beach In Espumilla Beach marine iguanas lounge and the Sally Lightfoot crabs attract the hunting herons performing the dance of predator and prey right before your eyes. Snorkeling is highly recommended as you could come face to face with an octopus, moray eel, shark and a variety of other species of tropical fish. In the afternoon: In the afternoon: Sullivan Bay You will visit Sullivan Bay located on the southeast part of Santiago. This place is interesting for its geology because the area is covered by lava flows. This place has elevations in the form of small volcanoes formed by the lava flows.

In the morning: In the morning: Bachas Beach Bachas Beach is located on the north shore of Santa Cruz and is a beach for swimming. One of the few remnants of the U.S. World War II presence in the Galapagos, a floating pier, can be seen here. You may see flamingos, Sally Lightfoot crabs, hermit crabs, black-necked stilts, and whimbrels. Sea turtles also nest on the beach. In the afternoon: In the afternoon: Fausto Llerena Breeding Center You will visit “Fausto Llerena” Giant Tortoises Creeding Center in Puerto Ayora, Santa Cruz Island, where giant tortoises are bred in captivity; this is home to tortoises ranging from 3-inches (new hatchlings) to 4-feet long adults. Subspecies of the giant tortoises interact with one another, and many of the older tortoises are accustomed to humans stretching out their heads for a photo opportunity. The babies are kept until they are about four years-old and strong enough to survive on their own.

In the morning: In the morning: Kicker Rock This striking rock formation is located a couple hours off the western shore of San Cristobal. Jutting out of the water, the rocks stand vertically at hundreds of feet above the ocean divided by a small channel. Although there are no landing areas, kayaking and snorkeling allow visitors to spot a variety of marine life. Afterwards: Afterwards: San Cristobal airport departure After this final visit, you will be transferred to the San Cristobal airport in time for your flight back to the mainland.

Itineraries are unlikely to change significantly but are subject to change. Weather, wildlife breeding, safety concerns, instructions from the Galapagos National Park, specific abilities and interests of passengers as well as operational matters may cause your guide or captain to change the time or nature of visits. Your guide and captain will always endeavor to select the best itinerary within these limits.

The Grand Majestic is the fastest and most modern vessel cruising the Galapagos Archipelago. The guide, captain and crew are dedicated to providing the highest quality service. Grand Majestic offers excellent four-, five-, and eight-day itineraries, led by a certified bilingual naturalist guide and a dedicated crew.

All cabins with private bathrooms, hot water and air-conditioning. 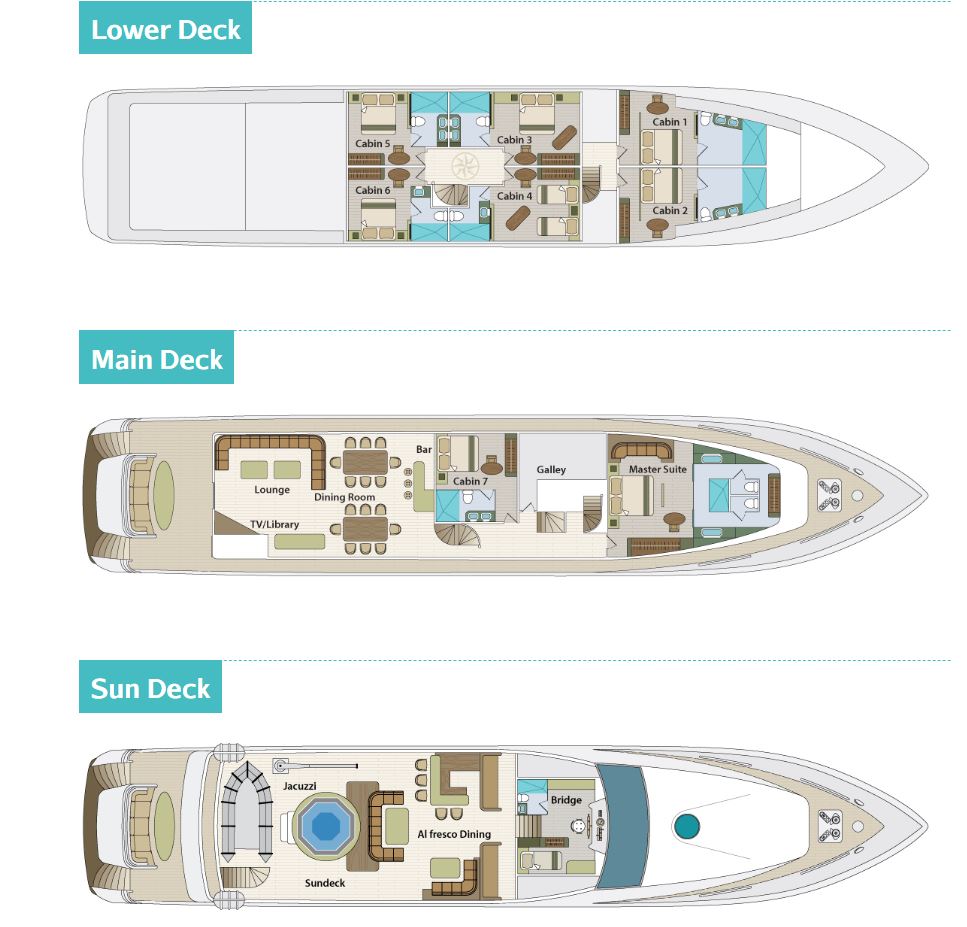 Voyage on board in selected cabin category
All meals while on board
Transfers between the airport and ship in Galapagos*
Excursions in the Galapagos
Bilingual guide
Use of snorkelling equipment & wetsuits
Trip specific inclusions;
One nigh hotel accommodation in Quito or Guayaquil (the day before the cruise)*
Hotel to Airport transfer for Galapagos flight*
Use of underwater camera 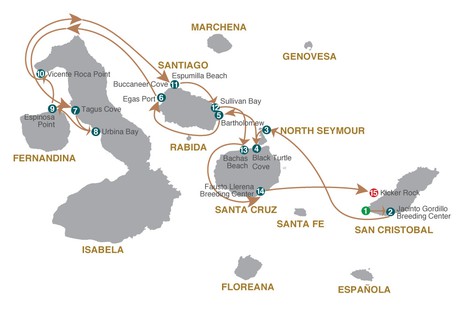