Print a pdf of this cruise
Cruise the East Coast Inland Passage through a rich past that has influenced our country since the days of early exploration. Enjoy the rejuvenated maritime spirit of Baltimore aboard the decks of celebrated ships and Norfolk where tall schooners share the surrounding waters with naval vessels. Continue your journey in Kitty Hawk and hear the fascinating story of the Wright brothers’ first flight from our resident park ranger. View captivating sites and magnificent mansions on a narrated trolley tour through Wilmington’s historic district. After your departure from scenic shores of Myrtle Beach, arrive in Charleston a city with a wonderful blend of antebellum architecture, cobblestone streets, flickering lanterns, and historic landmarks. Take a step back in time in Beaufort, and learn what life was like living on a southern plantation from our resident expert who greets you in period costume. Explore Savannah with its renowned historic districts that preserve 19th Century wealth and opulence. Learn about the fascinating history of Jekyll Island once owned by the wealthiest men in America.

• The East Coast Inland Passage, comprised of connecting rivers, bays, estuaries, and canals, will allow you to fully appreciate the unspoiled beauty of some of the most preserved areas in the United States

• From the unique vantage point of our small ship, discover the soaring birds and wildlife that call this passage their home

Baltimore is a great American city, bustling with excitement, colonial history and a rejuvenated maritime spirit. Explore its history aboard the decks of celebrated ships and on the cobbled streets of the charming waterfront Inner Harbor, or visit Fort McHenry, where Francis Scott Key was inspired to pen "The Star-Spangled Banner".

Located at the mouth of the Chesapeake Bay, Norfolk has enjoyed a dramatic history dating back to 1607, when British settlers first arrived on American shores. Today, the city embraces its colorful past while thriving as a modern metropolis. Tall schooners share the surrounding waters with naval vessels and oystermen. Enjoy tours of historic districts, museums, restored homes and the Norfolk Naval Station.

Learn about the birth of flight in Kitty Hawk, where the Wright Brothers successfully piloted sustained powered flights in the first incarnations of modern airplanes.

Enjoy a leisurely day of cruising as you continue on your journey through the East Coast Inland Passage. Delight in breathtaking views of the shoreline and relax in one of your ship's comfortable lounges.

Tour the meticulously restored town of Beaufort, NC. Beaufort is the third oldest town in North Carolina and has a 21-block historic district that includes a boardwalk lined with boats on one side and unique shops perfect for browsing on the other. Just across the Newport River is Morehead City which is always bustling with boat activity.

Founded in 1739, Wilmington prospered during its early years as a major port and ship-building center. Today, the city continues to flourish and boasts an outstanding reputation as a leader in preservation efforts. Explore Georgian, Victorian and antebellum-style homes restored to their original grandeur. Stroll through beautiful gardens and city streets lined with shopping venues and seafood eateries.

Recognized as one of America's most spectacular beaches, Myrtle Beach is an exciting city with dazzling theaters and unique shops located on Broadway on the Beach. Its fascinating lakeside entertainment includes the Grand Strand with over 100 specialty shops, the Palace Theatre and Ripley's Aquarium.

The port city of Charleston is known for its cobblestone streets, gas-lit lamps, and pastel antebellum houses. The scene of Revolutionary War naval battles, legendary pirate tales, and Civil War sieges, it is considered by many to be a living museum. Visit historic Fort Sumter National Monument, where the first shots of the Civil War rang out. Learn how Charleston’s African-American heritage has contributed to the city’s history and unique culture. Enjoy the beauty of the area with a stroll through magnificent parks and gardens.

Beaufort’s history includes European explorers, Native American inhabitants, British settlements and Civil War battles. Today, horse-drawn carriages bring you through the narrow streets of this district, past 18th and 19th century homes, famous for unique Beaufort-style architecture. View historic forts, elegant homes and majestic plantations and discover why Beaufort was once heralded as the “Newport of the South."

Hilton Head is a first class resort known for its championship golf courses and miles of pristine beaches. A boat tour of The Sea Pines Forest Preserve gives you a close-up view of Hilton Head's indigenous plant and animal life, including the native American Alligator.

Experience the forested uplands, salt marshes, and beach dune systems as you spend the day in Sapelo Island. Take a narrated island tour to visit the top attractions of Sapelo's Hog Hammock Community, the local lighthouse, and the mansion of the last millionaire to own the island, R.J. Reynolds.

St. Simons Island offers guests a view of the area’s rich past, including the momentous 18th century battlefields and sprawling, antebellum plantations. Enjoy its diverse wild live as well as the moss-draped oaks that shade walkways. Make sure to visit St. Simons Lighthouse, which houses a fantastic museum devoted to the history of the Georgia Coast.

Discover the fascinating history of Jekyll Island. At the end of the 19th century, wealthy men in America, including J.P. Morgan, William Rockefeller and Cornelius Vanderbilt, purchased the entire island as a hunting resort prized for its “splendid isolation." Today, Jekyll Island is part of Georgia’s Sea Isles and boasts “Millionaire’s Village,” - 240 acres of extravagant homes and winter cottages recognized as a National Historic Landmark.

Take in the beautiful weather of northern Florida as you disembark from your tour of the South. Jacksonville offers a number of wonderful activities, including a tour of Cummer Art Museum, which house an exclusive collection of art, including rare porcelain.

We do not guarantee departure point, termination point or any intermediate stop. Itineraries, schedules, routes, ships, and staterooms are always subject to change at any time without notice due to weather conditions, availability of docks, shoaling, river conditions, operation of locks, mechanicals, or any other reason. The times and dates of departure and arrival are also subject to change.

Our staterooms are the most spacious in the small ship cruising industry. All range between 200 and 450 square feet in size, and feature full-size bathrooms and modern amenities. After an invigorating day, your spacious stateroom is a comfortable haven and the perfect place to relax and unwind. Enjoy the ever-changing scenery from your large opening picture window or from your private balcony.

The Independence is equipped with the largest staterooms in the industry with most suites featuring private balconies. Featuring the latest in navigation and safety technology, the Independence is fully stabilized, allowing American Cruise Lines to reach even more fascinating destinations in smooth comfort. Complete with an exercise area and putting green, the Independence offers guests a relaxed and casual atmosphere. 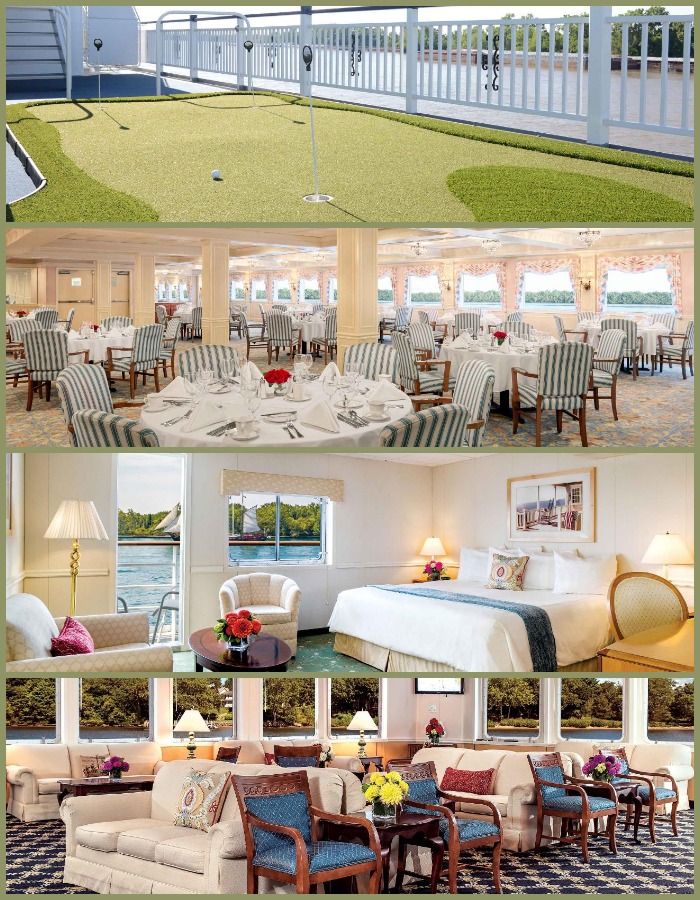 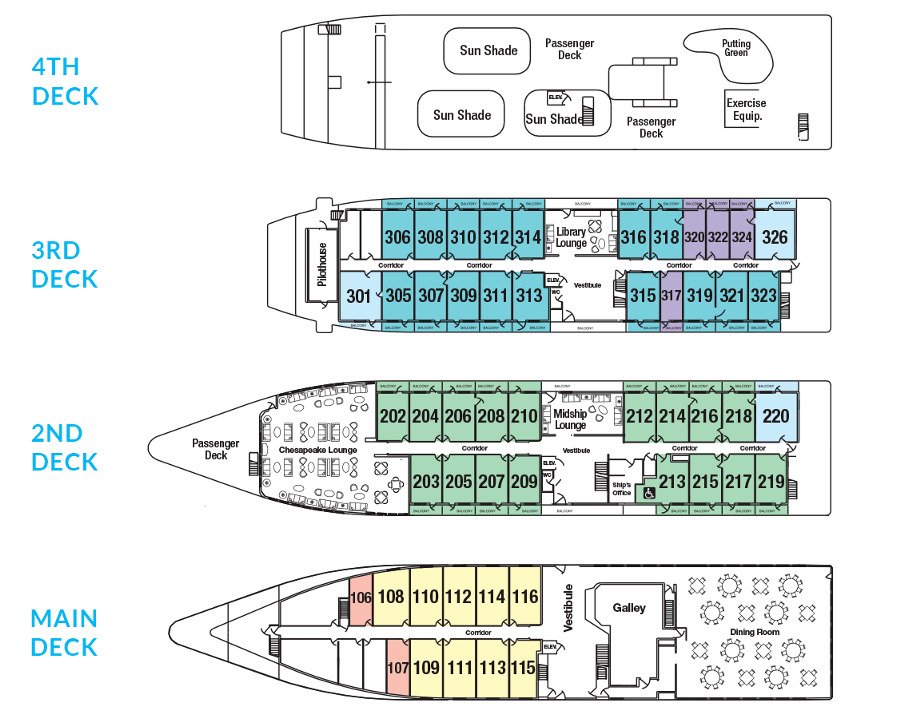 Voyage on board in selected cabin category
All meals while on board
Selected beer and wine included with lunch and dinner
Complimentary cocktail hour each evening
Coffee, tea, water and soft drinks
Entertainment on board
Free wif-fi on board (subject to coverage)
Gratuities not expected

International or domestic flights
Passport and visa costs where applicable
Travel insurance
Port charges/taxes
Shore excursions unless otherwise stated (Information provided in pre-tour booklet prior to departure, excursions can be booked and paid on board) 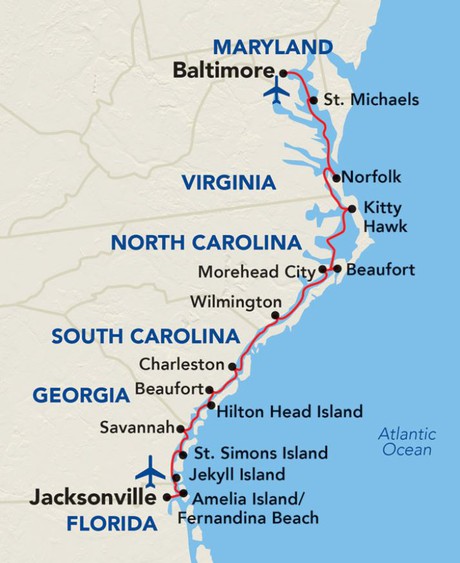