Print a pdf of this cruise
September in the Aegean is the perfect time for visiting some of the unspoiled islands, timeless villages and ancient sites. Join us aboard the 50-passenger MS Monet and explore some marvellous sites where 3000 years of history can be viewed in relative peace and quiet at a time of year when the absence of high summer crowds will contribute towards making this a memorable journey.

After many years of experience of operating cruises in the Aegean, we believe we have the perfectly balanced itinerary with a mix of guided excursions and time at leisure to explore the charming towns independently. We will explore some truly fascinating sites including the Sanctuary of the Great Gods on the small island of Samothrace, Pergamon which was one of the cultural capitals of antiquity and is one of the finest archaeological sites in Turkey, the 11th century Monastery of Nea Moni, a UNESCO World Heritage Site and one of the most important ecclesiastical monuments in Greece, the fascinating site of Ephesus where St Paul preached and on Patmos we will visit the grotto of St John. We will explore these sites with expert local guides who will also join us on board for our cruise, adding immeasurably to our knowledge of the region. By the end of the cruise you will have seen and learnt so much, all from the comfort of the MS Monet which allows us access to ports which the big ships simply can’t reach.

Fly by scheduled flight. On arrival transfer to the MS Monet and enjoy welcome drinks and dinner as we moor overnight.

Since its foundation by King Cassander of Macedonia in 315 BC and named after his wife and stepsister of Alexander the Great, Thessaloniki has always been a metropolis. The long history of the city is evident by the varied architectural forms from the Hellenistic era up to the end of the 20th century as well as an astonishing Byzantine artistic heritage. On our morning tour we will have the opportunity to see the White Tower, the symbol of the city, the Galerious Arch, the Rotunda, St Dimitrios church, the Citadel and the City Walls, from Samothrace, ‘Sanctuary of the Great Gods’ where you will have a marvellous view of the city and the Thermaic Gulf, with Mount Olympus in the background. Afterwards we visit the Archaeological Museum that houses a stunning exhibition of golden jewels. Return to the MS Monet for lunch and an afternoon at leisure to explore at your own pace before we sail this evening.

This morning we arrive off the Athos Peninsula, dominated by the peak of Mount Athos which rises to 2033 metres. Also known as Holy Mountain, a monastic community was established here in 963 when the monk Athanasios established the monastery of Great Lavra, which is still the largest and most prominent of the 20 monasteries located here. We will use the MS Monet to cruise along the coastline viewing the monasteries from the sea whilst our on board guides provide commentary. We continue to Myrina, the small capital of Limnos in the northern Aegean, known for its romantic castle built over the rocky promontory. The castle foundations date back to Classical times, when it was the site of a temple of Artemis. An afternoon guided walk will include the picturesque quay, Romeikos Gialos, lined with charming neoclassical house one of which houses the Archaeological Museum.

Arrive this morning on the small island of Samothrace. This rarely visited island contains one of the ancient world’s great sites, the Sanctuary of the Great Gods, the site of important religious ceremonies. We will visit the main archaeological site including the Greek theatre, ruined temples and the ruins of a rotunda built for Arsinoe, one of the largest circular buildings from ancient Greece. Also see the replica of the statue of Nike, the original of which was discovered here in 1863 and now resides in the Louvre museum. Return to the ship for lunch and an afternoon at sea.

From our berth in Dikili we embark on a full day tour and drive inland, past fertile fields and olive trees, to the present day modern town of Bergama, once known as Pergamon, a great centre of culture. Today Pergamon is one of Turkey’s finest archaeological sites. We will visit the Asclepion, a healing centre from the 4th century BC and one of the most important sites of Pergamon. Discover the Temple of Asclepios, the amphitheatre, and walk through the sacred corridor and down the ancient, arcaded, marble-paved boulevard. Continue into the town of Bergama and visit the Archaeological Museum which houses relics discovered during the excavations of Pergamon. En-route we will see the Basilica which was one of the earliest of the Seven Churches of Asia Minor. Take a cable car up to the Acropolis to explore the remains of the citadel and the city walls, the foundations of the Zeus Altar, and the Royal Palace. Lunch will be served ashore before we return to the ship this afternoon.

The birthplace of Homer, Chios remained a significant Aegean island into the Byzantine period. Homer mentions the island by name several times in the Odyssey, calling it ‘paipaloessa’, or craggy, a richly deserved epithet. The island is rich in ancient ruins and this morning we will visit the 11th century Monastery of Nea Moni, a UNESCO World Heritage Site and one of the most important ecclesiastical monuments in Greece. Return to the MS Monet for lunch and this afternoon is free to explore the town of Chios independently or join a tour to the south of the island where we visit the beautifully preserved 14th century fortress village of Mesta and the elaborately decorated houses of Pirgi enjoying time to wander through their maze like streets.

Of all the Greek islands, Patmos is the most sacred to Christians both Orthodox and Western and it was here that St John received his revelation. This morning, we will make our way to the grotto of St John. This small cave, now converted into the beautiful chapel, is where the Saint lived, had his revelation and wrote ‘Book of the Apocalypse’. From here continue to the village of Chora, with its simple houses and Byzantine churches and climb to the Monastery of St John the Theologian. Upon entering into the courtyard, admire the intricate pebbled floor, decorated arches and frescoes adorning the entrance to the chapel of Christodoulos. Return to the MS Monet for lunch and an afternoon and evening at leisure as we will sail late tonight. Perhaps explore the picturesque town of Skala or maybe enjoy a swim at a nearby beach.

From our berth in Kusadasi we will drive to the nearby ancient city of Ephesus, a stunning and partially excavated site where digging has been taking place for over a century. Broad streets are lined by impressive buildings including the Library of Celsus and the temples of Serapis and Hadrian. Once the capital of Ionia, St Paul preached here on his second missionary journey and we will see the Church of the Virgin Mary, the most important Christian monument in Ephesus. Also see the spectacular Grand Theatre, originally built in the 3rd century BC by the Greeks, and later expanded by the Romans to its present capacity of 24,000. We will enjoy an afternoon and evening at leisure in Kusadasi as we moor overnight.

Disembark this morning and transfer to Izmir airport for our scheduled indirect flight to London. 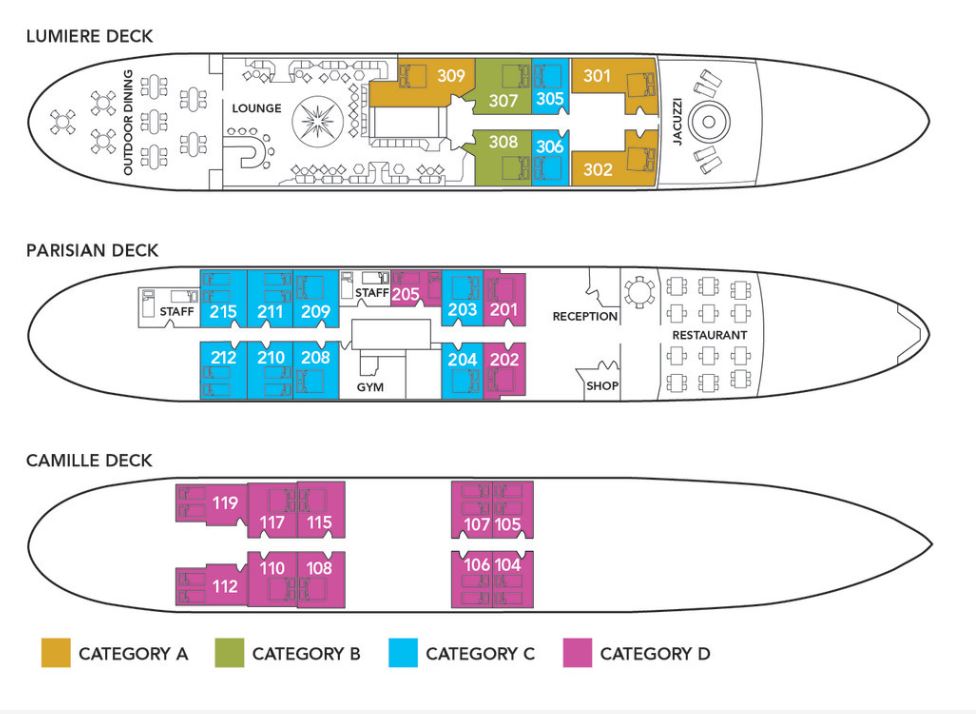 Before embarking the MS Monet we are offering the opportunity to spend some time in the city of Thessaloniki. 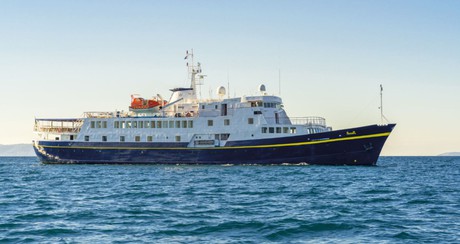 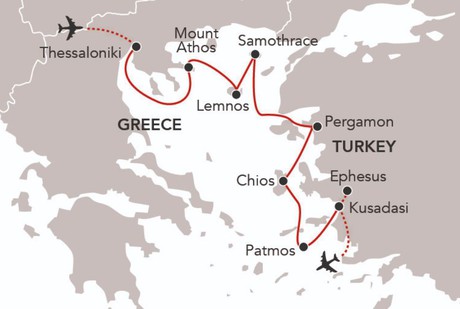