Print a pdf of this cruise
The Chukotka region is one of 85 regions which make up the Russian Federation, officially known as the Chukotka Autonomous District, it was the last part of Siberia to be ‘conquered' or ‘subdued' by the Cossack invaders from the west. The indigenous people of this region include Chukchi, Inuit, Even, Koryak, Chuvan and Yukaghir, the non-native inhabitants are predominately Russian. The Soviet regime initially treated these indigenous people well, but the collapse of the Communist regime in the early 1990s spelt disaster for the people as they had become dependent upon the state. The election of Roman Abramovich as Governor of Chukotka in December 2000 changed the course of its history. His vision, generosity and leadership gave the people hope, and today Chukotka is taking its rightful place in the Russian Federation. It is rich in natural resources and wildlife is abundant, but like all Arctic fauna, it is under pressure because of significant climate change.

North of Chukotka, where the Chukchi Sea meets the Arctic Ocean, lies nature reserve and World Heritage site Wrangel Island, which has outstanding wildlife values. Sometimes referred to as the world's Polar Bear Maternity Ward, because of the high density of denning Polar Bears, it is one of those islands that never disappoints those who are keen on natural and Arctic history. As the ice retreats each summer (further and faster than ever before) Polar Bears come ashore and we see good numbers of these, likewise walrus find refuge here each summer normally in large numbers. Birds like Snow Geese and Snowy Owls also breed here. And of course Wrangel Island is central to the story of the wreck of the Karluk and it features in other Arctic exploration stories.

On this special Chukotka expedition we will meet the locals; see and listen to their stories and experience their love for and strong connection with the land and the sea. We will celebrate with them at their annual Regatta and Festival. We will explore the vast expansive tundra with its wild flowers and dwarf tree species and we will watch for brown bears, reindeer, Arctic Foxes, ground squirrels and, if we are lucky, we may also see a Wolverine. We will explore Wrangel Island with its Polar Bears, walrus and rich Arctic history and at sea we will look out for whales.

For those departing from Nome, Alaska, your adventure begins with a flight across the Bering Sea and International Date Line, to the remote port of Anadyr.

All expedition members will arrive in Anadyr, the administrative capital of Chukotka. Depending on your time of arrival you may have the opportunity to explore Anadyr before boarding the vessel. We will sail in the late afternoon for Egvekinot.

This small town was built by Gulag prisoners as a port to supply the rich Lul’tin mining complex some 200 kilometres inland, they were then forced to construct a road to the mine. We explore the town which has an excellent museum and plan to travel by Ural to explore along the road towards Lul’tin and into the tundra to gain an appreciation of this unique Arctic landscape close to the Arctic Circle.

Across Kresta Bay from Egvekinot is the small reindeer herding village of Konergino. Reindeer herding is still an important part of the indigenous people’s culture and economy, the practice has remained largely unchanged over the centuries and revolves around ‘brigades’ looking after large herds of reindeer out on the tundra. Today is an introduction to, and an opportunity to understand, this practice.

We will be cruising along the south coast of Chukotka today and we will take the opportunity to stop at Presbrazhenya Bay. We Zodiac cruise spectacular bird cliffs which could provide great photographic opportunities. We also plan time exploring the rich tundra landscape for birds and plants.

The significant and intriguing archaeological site of ‘Whale Bone Alley’ on Yttygran Island dates to the 14th Century, its origins and purpose have been the cause of much debate. Whale bones stretch along the beach in the form of a pathway for nearly half a kilometre. Gray Whales are frequently seen in the vicinity and there may be a chance to go whale-watching by Zodiac. This afternoon we plan a landing at nearby Gil’mimyl Hot Springs.

Sea conditions permitting, we plan to land at Cape Dezhnev early this morning; this is the north-eastern most point of the Eurasian continent. The name commemorates the accomplishment of the Cossack Semyon Dezhnev who was the first European to sail through this strait in 1648 (80 years before Bering did). Nearby is the former Inuit village of Naukan, the inhabitants were relocated to nearby villages by the Soviet administration in 1958 but photographs and stories make the site come alive.

Relax as we navigate northwards towards Wrangel Island. Ice conditions will determine our speed and course and will ultimately dictate whether we will actually be able to reach the island.

As we approach the island we will spend time searching the ice for Polar Bears, Ringed Seals and walrus. Should there be opportunities to land we will explore the tundra to look for species which breed here. We have allowed three days on and around the island to take advantage of whatever conditions we encounter and will be utilising the local knowledge of the Park Rangers to make multiple landings and Zodiac cruising the ice.

We sail south towards Kolyuchin Island. The day is filled with illustrated lectures, opportunities to spend time on deck, relaxing in the ship’s bar and catching up with some reading or download and editing photos.

This morning we plan a landing and/or Zodiac cruise at Kolyuchin Island. When the ice recedes large numbers of walrus sometimes haul out on the island. At the western end of the island is the remains of a Polar Research Station and nearby are some amazing bird cliffs, where it is possible to get magnificent views (and photographs) of puffins and guillemots. This afternoon we will cruise to nearby Kolyuchin Inlet, a massive tidal estuary and ideal habitat for many bird species, it is early enough in the season for the majority of them to either be on nests or have young. It is an easy landing with lots of opportunity for ‘birding’.

Day 13: Lavrentiya and the Annual Beringia Regatta and Festival

We plan to be here for opening day of the annual Beringia Regatta and Festival which includes Baidara (traditional walrus skin covered boats) races as well as cultural group performances and games. It is one of the most colourful festivals in the Chukotka calendar and attracts people from many villages. There will be a range of activities at the Regatta and Festival and local foods for you to sample and souvenirs to purchase. This is a festival that gets to the very heart and soul of the people, their culture and their land.

As we make our way back to Anadyr we will recap the many experiences we have enjoyed on this special Chukotka expedition.

After breakfast passengers will be taken ashore, a complimentary transfer to the airport or to a central downtown hotel will conclude the expedition.

• International and Domestic flights, both commercial and charter
• Travel insurance
• Passport and visa costs if applicable
• Beverages on board
• Gratuities
• Any items of a personal nature including laundry
• Private charter flight Nome to Anadyr and return to Nome US$2,000.00pp
• Local Payment USD$500.00pp 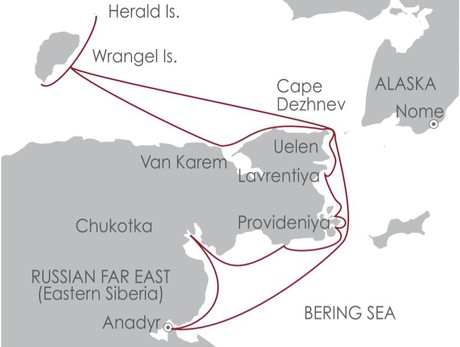