Print a pdf of this cruise
Discover amazing endemic wildlife, meet the locals and experience conservation in action as we journey through the incredibly-diverse archipelagos of the Chatham, Antipodes and Bounty Islands.

Their first inhabitants, the Moriori, called them ‘Rekhou' (misty skies), the Europeans who rediscovered them in 1791 named them the Chatham Islands after their ship, while Maori, who didn't settle the islands until 1835, called them ‘Wharekauri'. Today, most New Zealanders know them as the last place mentioned in their daily weather forecast, but some might also know them as the home of the endangered Black Robin.

The Chatham archipelago (made up of at least 12 islands, plus numerous islets) lies 870 kilometres east of New Zealand and runs 45 minutes ahead of the rest of the country. The history of these islands and their rich natural history is unique, and it is only recently that these precious islands have begun to be understood and appreciated. Several books, including Rodney Russ' Galapagos of the Antarctic - Wild Islands to the South of New Zealand capture some of their beauty and mystique, but it is only by visiting these remarkable islands that one can truly appreciate what they have to offer. During explorations around the archipelago we will hear remarkable stories of rediscovery and population recovery with the Black Robin and its rescue from the brink of extinction, and the once thought to be extinct Chatham Island Taiko (Magenta Petrel). The ongoing careful management of these critically endangered species serve as beacons of hope and inspiration for conservationists everywhere. Heritage Expeditions has an excellent track record of sighting a number of Chatham Island Taiko during its voyages to the Chatham archipelago and we hope to continue the good fortune during this expedition.

Visiting the Chatham Islands is not difficult, but this expedition is unique and rare, as it includes the seldom visited (and almost impossible to get to) outlying islands. Our journey is also guided by a team of Chatham Island experts whose knowledge will add another dimension to your experience.

This expedition also includes designated UNESCO World Heritage sites The Antipodes and Bounty Islands, which are afforded the highest conservation status and protection by the New Zealand Government (there are also islands that we visit within the Chatham Islands' archipelago with similar status and protection). While no landings are possible at these remote outcrops, islets and stacks, we plan to Zodiac cruise their shorelines if weather conditions are favourable.

Make your way to the Ascot Park Hotel where we will transfer you to the ship. Settle into your cabin and join the captain on the bridge, or fellow travellers on deck, as we set sail for the Antipodes Islands.

The Antipodes Islands are the most isolated and perhaps least known of New Zealand’s Subantarctic Islands. Antipodes Island has benefited from one of the world’s most successful island eradications dubbed the ‘Million Dollar Mouse’ which saw the island declared ‘mouse free’ in 2018. The island’s unique plants and wildlife now thrive following the removal of some 200,000 mice. Landings are not permitted, so if sea conditions are suitable we plan to Zodiac cruise along the coastline looking for the Antipodes Parakeet, the largest of New Zealand’s parakeets, which has an entirely green head, the Reischek’s Parakeet, a subspecies of the Red-crowned Parakeet found in the Auckland Islands and on the Chatham Islands, as well as the Antipodes subspecies of the New Zealand Pipit. We can also expect good views of Erect-crested and Rockhopper Penguins, Antarctic Terns and Kelp Gulls.

Pelagic birding opportunities as we approach the Chatham Islands’ archipelago include the Chatham Island Petrel and, in the past, we have observed the very rare Chatham Island Taiko (Magenta Petrel), one of New Zealand's most endangered species. Consisting of one large island and numerous smaller islands and rocky islets, only two islands of the Chatham Islands’ archipelago are inhabited. Working closely with the Chatham Island people our visit could include: Chatham Island The main settlement of Waitangi features a wharf normally bustling with activity where we may see the endemic Chatham Island Shag. Visiting a private reserve in Awatotara Valley there is a good chance to see the endemic Chatham Island Pigeon (once close to extinction), Chatham Island Warbler and Tui. During our time on the main island our activities may include: · Visiting small fishing village Owenga and searching for fossilised sharks’ teeth at Blind Jim’s Creek. · Discovering the rich history of Maunganui’s old stone cottages and seeing the dendroglyphs (tree carvings) at the JM Barker (Hapupu) National Historic Reserve. · Viewing the island’s two endemic shags (cormorants) at Matarakau and endemic plants, including the famed Chatham Island Forget-me-not, at Kaingaroa · A visit to the uniquely designed Kōpinga Marae, built as a tribute to the Moriori ancestors. Mangere and Little Mangere Islands Mangere Island is one of only two sites in the world where Black Robin are found. We will hear how this endemic species was rescued from the brink of extinction in the 1970s from a population of just six birds. As we Zodiac cruise the islands we will be looking for the rare, endemic Forbes’ Parakeet or Chatham Parakeet at Mangere Island. Pitt Island The jewel in the Chatham Islands’ crown, our visit may include Flowerpot or Glory Bay where we will hear stories of life on the island and be on the look out for impressively horned New Zealand Pitt Island Sheep. Pyramid Rock Viewing the basalt outcrop of Pyramid Rock – the only breeding place of the Chatham Island Albatross – great views of birds can be had. South East Island One of the world’s greatest nature reserves, we plan a Zodiac cruise where we can expect to see the world’s rarest wader the endemic New Zealand Shore Plover, Chatham Island Oystercatcher, and Pitt Island Shag.

We will cross the Chatham Rise where nutrient-rich waters allow for an overlap between northern pelagic and southern latitude birds including Wandering Albatross, Royal Albatross, Salvin’s Albatross, Cape Petrel, Westland Black Petrel and Cook’s Petrel. We can also expect to see shearwater and prion species off New Zealand.

After a final breakfast we will say our farewells and board complimentary transfers to either a central city drop off or Christchurch airport.

• International and Domestic flights, both commercial and charter
• Travel insurance
• Passport and visa costs if applicable
• Beverages on board
• Gratuities
• Any items of a personal nature including laundry
• Landing Fee USD$100.00pp 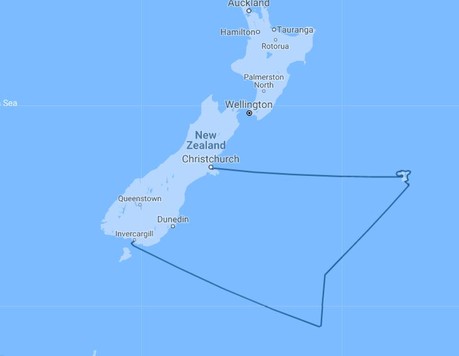