Birding Down Under: Subantarctic and Chatham Islands aboard Spirit of Enderby

Print a pdf of this cruise
Listen to the names: Snares, Bounty, Antipodes, Auckland, Campbell, Macquarie and Chatham Islands. They are music to the ears of ‘Birders'. Apart from the Chathams, these islands are probably more isolated now than they were when they were discovered in the late 1700s and early 1800s and were regularly visited by sealers, whalers and government steamers searching for castaway sailors. It is relatively simple to get to the Chatham Islands, but opportunities to visit the others are rare. This expedition, one of a number operated each year by Heritage Expeditions, is the only one to include all of these islands.

The islands occupy the tempestuous latitudes of the Roaring Forties and the Furious Fifties, but they are also known as the Albatross Latitudes and with good reason. Ten of the world's albatross species breed in the region; five of them nowhere else but here! In fact, this zone where the air is never still hosts the most diverse collection of seabirds in the world. More than 40 species breed here - that is at least 11 per cent of the entire world's seabird population.

With the exception of the Chathams, the islands are all designated UNESCO World Heritage sites and are afforded the highest conservation status and protection by the Australian and New Zealand governments, so passage to their shores is not granted lightly. There are also islands that we visit within the Chatham Islands' Archipelago with similar status and protection.

This is one of our ‘signature expeditions' which has operated annually for more than 20 years, so you will benefit from the knowledge and expertise gained over that time.

This evening there will be an informal get together at the hotel for dinner, an excellent opportunity to meet fellow adventurers and some of our expedition team.

Take breakfast at your leisure in the hotel restaurant before exploring the local attractions and transferring to the Port of Bluff where we board the Spirit of Enderby.

Cruise by Zodiac, if weather and sea conditions are suitable, along the sheltered eastern side of North East Island. We should see the endemic Snares Crested Penguin, Snares Island Tomtit and Fernbirds. We should also see Cape Pigeons, Antarctic Terns, White-fronted Terns and Red-billed Gulls. There are hundreds of thousands of Sooty Shearwaters nesting here and the Buller’s Albatross also breed here from late December onwards.

These islands have witnessed many a shipwreck in days gone by, and harbour tales of castaways and Coastwatchers. If weather and sea conditions are suitable, energetic expeditioners are able to climb to the South West Cape Shy Albatross colony where Gibson’s Wandering Albatross often nest among the tussocks above the colony.

We can expect some of the best pelagic birding on this leg of the journey from the Auckland Islands to Macquarie Island with great views of species such as the Royal Albatrosses, Wandering Albatrosses, Shy Albatross, Black-browed Albatross, White-chinned Petrel, diving-petrel, Little Shearwaters, storm-petrel and, to confuse everybody, numerous prion species.

The only place in the world where the regal Royal Penguin breeds, this remote outpost supports a breath-taking concentration of wildlife. You will never forget your first experience of visiting a noisy ‘penguin city’ where you will be witness to a thousand chattering, feeding chicks, territorial disputes, petty pilfering and courtship displays: King, Gentoo and Rockhopper Penguins can be seen here. We meet with Park Rangers and seek out the thousands of Southern Elephant Seals lolling on the beaches and along the coast, Redpolls and Imperial Shag can often be spotted.

We will be keeping a keen lookout for cetaceans, albatross and petrels today, relax in the ship’s bar or catch up on your reading in the library.

We drop anchor in Perseverance Harbour. Once on shore we walk to the nesting site of the Southern Royal Albatross or to Northwest Bay, passing beautiful megaherbs on the hills. During the day we should see the Campbell Island Shag and Teal, Southern Skua, Antarctic Tern, Dunnock, New Zealand Pipit and, hopefully, the elusive Campbell Island Snipe.

Join us on the bridge, where we keep a keen lookout for species commonly seen in this area: Black-browed Albatross, Campbell Island Albatross, Light-mantled Sooty Albatross, Salvin’s Albatross, Sooty Shearwater and Little Shearwater. There should be plenty of petrels and, again, the hard to identify prion species.

One of the most isolated, least known and rugged of the Subantarctic Islands; landings are not permitted here, so we cruise along the coast looking for the endemic Antipodes Island and Reischek’s Parakeet. We may also see the Antipodes subspecies of the New Zealand Pipit, and with half the world population of Erect-crested Penguins here, we should encounter one or two as well as Antarctic Terns and Kelp Gulls.

Day 14: At Sea and Pyramid Rock

We continue north towards the Chatham Islands, with similar species accompanying us as yesterday. Towards evening, as we approach the islands, we are closer to the Subantarctic and sub tropical convergence and will see a subtle change in the species composition. Late this afternoon we arrive at the spectacular Pyramid Rock, the only breeding place of the Chatham Island Albatross.

Arrive early morning at South East Island, one of the world’s greatest nature reserves, here we plan to Zodiac cruise to see the endangered Shore Plover. We will also keep our eyes peeled for the Pitt Island Shag. Before we depart the archipelago we visit the Mangere Islands from where the endemic Black Robin was rescued.

En route to Dunedin we will cross the Chatham Rise, here nutrient-rich waters allow for an overlap between northern pelagic species and birds from southern latitudes. We can expect to see Royal Albatross, Wandering Albatross, Westland Black Petrel, Cook’s Petrel and much more.

Our adventure ends at this historic Otago Harbour. Early this morning we arrive in port and after a final breakfast we say our farewells before disembarking and transferring by complimentary coach to either a central city point or to the airport. Enquire for a full itinerary and/or a Bird and Mammal List. 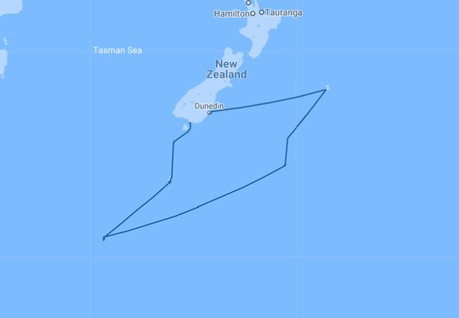