Print a pdf of this cruise
Heritage Expeditions pioneered expedition cruising in 1985 by cruising the rugged and unique southern coastline of New Zealand's South Island, including Fiordland and Stewart Island. From those first days exploring the wilderness from their tiny yacht base with just five travellers aboard, the Russ family realised their dream that responsible tourism, enacted in a genuine and responsible way in conjunction with local government, had the ability to assist in the protection of vulnerable areas. From there, Heritage Expeditions grew to escorting 50 conservation-minded passengers per expedition to the world's most special regions, but our passion for New Zealand's wilderness never diminished.

As we head back to explore the remote ice-carved mountains, verdant forests and winding fiords of Fiordland, it will be easy to see why this incredible region inspired our dream for responsible travel. We will travel the calm waters of Fiordland in solitude, away from the crowds, on the lookout for marine life, elusive birds and stunning vistas. Established in 1952, Fiordland National Park is now over 1.2 million hectares in size, and encompasses mountain, lake, fiord and rainforest environments. We plan to explore some of the most unique and wild parts of Fiordland as we sail though the beautiful fiords and landscapes.

We will also explore Stewart Island's Ulva Island, free of introduced pests and home to a range of birdlife. Stewart Island, New Zealand's 3rd largest island is rich in history and wildlife, we will take the time to enjoy Ulva Island/Te Wharawhara, to listen to the native bird song and take a closer look at the history of Paterson Inlet.

These islands and region represent a priceless ecosystem and showcases the work that the New Zealand Government's Department of Conversation has and is undertaking to protect, preserve and reintroduce New Zealand's amazing wildlife, this is a once in a lifetime expedition to explore remote parts of New Zealand's Southern region, an area known for its range of birdlife and jaw-dropping scenery on a grand scale, and where we hope to see a large number of New Zealand's threatened species.

This is your chance to directly contribute to the future of New Zealand's most precious regions. When you book, we'll donate 5% of the cabin price to the Department of Conservation's valuable work in the Subantarctic Islands and Fiordland. Plus there will be the opportunity to get involved along the way and gain, first hand, an appreciation of the Department's latest conservation projects in these areas.

Meet at an Invercargill city hotel and be transferred to the Port of Bluff for embarkation. The captain and expedition team will be waiting to greet you on arrival at the ship. Explore the Spirit of Enderby and join the captain on the bridge, or fellow travellers on deck, as we set sail.

As we make our way through the Southern Ocean we can expect some of the best pelagic birding on this leg of the journey with great views during the crossing which may include Wandering Albatross, Royal Albatross, Light-mantled Sooty Albatross, Campbell Island Albatross and Little Shearwater.

We have one day to explore Campbell Island, New Zealand’s southernmost Subantarctic territory. We will offer a number of options which will enable you to explore the island including an extended walk to Northwest Bay. There will also be an easier walk to the Col Lyall Saddle. All of these options will allow you the opportunity and time to enjoy the Southern Royal Albatross which nest here in large numbers. We also visit areas of the island which contain outstanding examples of the megaherbs for which the island is renowned. Birds we may see include Teal, Snipe, Rockhopper Penguins and Antarctic Tern.

This very large sheltered harbour is rich in human history, we plan to arrive mid-morning entering the harbour through the eastern entrance which is guarded on both sides by dramatic cliffs and rugged, tussock-covered hills. Our activities here today are totally weather dependent. If the weather is fine there will be an opportunity to climb to the South West Cape and visit the Shy Mollymawk colony. Above the colony we occasionally see Gibson’s Wandering Albatross breeding. Alternatively, there will be an opportunity to Zodiac cruise along the coast of Adams Island, Western Harbour and Victoria Passage. We may visit Camp Cove, the Tagua Bay Coastwatcher’s station and lookout, or Epigwaitt where the remains of the ‘Grafton’ which was wrecked here in 1864, can be seen.

Enderby Island is one of the most beautiful islands in this group, this northern most island in the archipelago is an outstanding wildlife and birding location and is relatively easy to land on and walk around. Our plan is to land at Sandy Bay, one of three breeding areas in the Auckland Islands for the Hooker’s or New Zealand Sea Lion. During our day ashore there will be several walking options, and time to spend just sitting and enjoying the wildlife. Birds that we are likely to encounter include Southern Royal Albatross, Northern Giant Petrel, Auckland Island Shag, Auckland Island Flightless Teal, Auckland Island Tomtit, Bellbird, Red-crowned Parakeet, Yellow-eyed Penguin and Light-mantled Sooty Albatross.

The closest Subantarctic Islands to New Zealand, comprising of two main islands and a group of five islands called the Western Chain; they are uninhabited and enjoy the highest protection as Nature Reserves. Zodiac cruising along the sheltered eastern side of the main island we should see the endemic Snares Crested Penguin, Snares Island Tomtit and Fernbirds.

New Zealand’s third island is a wonderfully tranquil place; the scenery of untouched bushland is stunning. We will explore Ulva Island which is rich in history and wildlife, being a predator-free island from 1997 the bird song and wildlife is some of the best. In Paterson Inlet you will have time at Boulder Bay and West End Beach, or just enjoy some time around Post Office Bay and Sydney Cove. Wildlife you may get to see while walking the tracks include Stewart Island Robin, Stewart Island Weka, South Island Kaka, Kereru (wood pigeon), Mohua (yellowhead), Red Crowned Parakeet, Fantail, Bellbird and Tui. There are also many more species that may be seen. In the afternoon visit historic Norwegian whaling station in Prices Inlet and Kaipipi Bay.

This is an area rich in history, majestic scenery and abundant in wildlife. Captain Cook and his crew landed here on HMS Resolution in 1773, the first Europeans to visit Fiordland, spending five weeks in Dusky Sound. Historically this region is very important and shaped the future of New Zealand. From the middle of the 19th Century this unexplored interior Fiordland coastline attracted the attention of those in search of hidden greenstone or New Zealand jade. Fiordland’s West Coast is only accessible by sea, making it the most remote region of New Zealand’s mainland, its isolation has been beneficial because its beauty remains unspoiled and its historic sites undisturbed. Waterfalls, streams, rivers and fiords are enveloped with misty veils that come and go. A rugged terrain, the thickly forested floors are covered with ferns, lichens and mosses. Bottlenose Dolphins, Fiordland Crested Penguins and Little Penguins are all residents of the fiords; during our time here we will look out for them. Our schedule gives us the flexibility to visit as much as possible; areas we plan to visit during our time in Fiordland include Doubtful Sound, Dusky Sounds and Acheron Passage, Astronomer’s Point and Pickersgill Harbour. Our final plan will be determined by the weather.

We arrive at the Port of Bluff early in the morning. After breakfast disembark and board our complimentary coach transfer to either a central city point or to the airport.

• International and Domestic flights, both commercial and charter
• Travel insurance
• Passport and visa costs if applicable
• Beverages on board
• Gratuities
• Any items of a personal nature including laundry
• Landing Fees: USD$400.00 per person 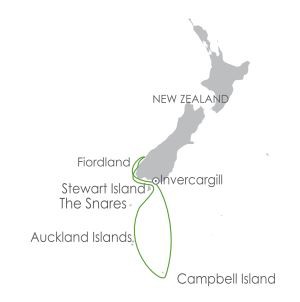