Print a pdf of this cruise
Circle the Iberian Peninsula, tracing history from the Romans and Moors to the explorers that spearheaded the Age of Discovery. Delve into some of Europe’s most captivating cities, including Barcelona, Seville, Lisbon, and Porto, and head to the countryside to discover the timeless villages of the Algarve, Galicia, and France and Spain’s Basque country. Encounter wonders both ancient and modern, from the Roman ruins of Cartagena to the avant-garde architecture of Valencia and Bilbao. Along the way, savor local cuisine, sampling paella and port at their source and learning to make pintxos, Basque tapas.

• Encounter an array of architectural marvels, from the Alhambra in Granada to Lisbon’s 16th-century Jerónimos Monastery, and Frank Gehry’s titanium-clad Guggenheim in Bilbao, and capture your best photos alongside a National Geographic photography expert

• Learn how cork oak is harvested in the orchards of the Algarve, and collect mussels with local fisherman in Galicia

• Discover the works of renowned artists including Mark Rothko, Jeff Koons, and Richard Serra on a private tour of the Guggenheim in Bilbao

Arrive in Barcelona, Spain, and explore the iconic architectural masterpieces of this city, the energetic street rhythms coming from Las Ramblas, and the beautiful views atop Montjuic. Embark National Geographic Resolution in the late afternoon and set a course west for Valencia. (L,D)

In sunny Valencia, old-world cafes mingle with Gothic cathedrals and futuristic architecture. Explore the rich birdlife of Albufera National Park —Thekla's Lark, the Wood Sandpiper, and more— by hopping aboard private fishermen’s boats along the canals of the lake, where they cultivate rice and harvest shellfish for paella. Enjoy a traditional paella—Valencia’s signature dish. (B,L,D)

Today we explore Cartagena—where Phoenicians, Romans, and Moors all left their mark. Walk amid the city’s medieval fortress and visit the lookout at Parque Torres to view the ruins of the Roman amphitheater, side-by-side with a modern-day one. (B,L,D)

Nestled at the foot of Spain’s Sierra Nevada range, Granada is a city rich in history and culture. Its legacy as the last stronghold of the Moors lives on in the architecture, cuisine, and culture of the modern-day city. Spend the day exploring Granada’s vibrant center, or choose to explore the Alhambra, a fortified palace complex boasting exquisite Moorish architecture and decor, as well as meticulously landscaped gardens. The following day, we dedicate our time to discovering Málaga, the birthplace of Picasso and a gem of a coastal city surrounded by charming Andalusian towns. Or spend the day in Ronda, where bullfighting originated. Discover the town’s iconic Puente Nuevo, a stone bridge spanning the gorge and separating the new and old towns, or set for a hike in the countryside. (B,L,D)

From Cádiz, travel to the graceful Andalusian capital of Seville to see one of the world’s largest Gothic cathedrals and the famed Alcázar palace, where the king and queen of Spain greeted Columbus. Or opt to visit a traditional sherry bodega, which houses a private Spanish art collection with works by Goya, Velazquez, and Zurbaran. (B,L,D)

Portimão is our gateway to Portugal’s southernmost province, the Algarve, known for its picturesque beaches, whitewashed villages, lush farmlands, and remnants of Moorish culture. Travel north to Silves, home to a fortified sandstone castle built by the Moors and learn about the tradition of harvesting cork from cork oak trees. Or, spend the afternoon exploring the sea caves of the Algarve coast by small boat while savoring a glass of medronho, a local fruit brandy. (B,L,D)

Lisbon, the second oldest European capital, maintains a reputation as one of the continent’s most vibrant and charismatic cities. Captivating history, art, culture, and delectable cuisine make the birthplace of fado music worth discovering. Begin your exploration of this fascinating city on a morning tour. See the stunning 18th century downtown area of the city and take in views in the Graça District, one of Lisbon's oldest suburbs located atop the city’s highest hill. Enter Terreiro do Paço, “the palace’s square,” where the royal palace stood for over two centuries and marvel at the grandeur of Lisbon Cathedral. In the afternoon continue to Jerónimos Monastery, a UNESCO World Heritage site. This intricately carved building was crafted to showcase the magnificent wealth that the age of exploration brought to the Portuguese empire. Continue to the Tower of Belém Tower, a 16th-century fortification that served as a ceremonial gateway to Lisbon and as a start and ending point for Portuguese explorers. Alternatively, spend the day in Sintra, a charming town hidden in the pine-covered hills of the Serra de Sintra. Home to the whimsical Palácio Nacional de Pena, the medieval Palácio Nacional de Sintra, the Morrish Castelo dos Mouros, and the Arabianinspired Monserrate Palace, Sintra was the first European site listed by UNESCO as a Cultural Landscape. (B,L,D)

Take a panoramic drive into the UNESCO World Heritage site of Porto in the early morning. The birthplace of port wine, Porto straddles a gorge on the Douro River, linked by numerous bridges and filled with medieval architecture. See the famous azulejo tiles of the region and take in the views from the iron masterpiece Ponte Dom Luís. Learn the secrets of port-making during a tasting at a riverside port house. Take a tour of the Bolsa Palace Stock Exchange, the Clérigos Church Tower, the iconic Ribeira neighborhood, or the Monument Church of Saint Francis. (B,L,D)

Anchor in Villagarcía de Arousa and take a day trip to the Galician countryside, where you’ll visit a winery, watch fishermen as they collect mussels, and enjoy the verdant Galician landscapes from the river. Alternatively, travel to Santiago de Compostela, and visit the cathedral that has welcomed millions of pilgrims over the centuries. Enjoy a typical Galician musical performance and a tapas lunch at the adjacent Hostal dos Reis Católicos. Take the opportunity to hike a portion of the Camino de Santiago pilgrimage route before heading back to the ship. (B,L,D)

This morning we arrive in Bilbao, one of the great cities within Basque country. Surrounded by rolling hills, Bilbao excels not only in its architectural masterpieces, but in its superb Basque cuisine. Explore the titanium curves of Frank Gehry’s iconic Guggenheim Museum and learn how it has transformed the city. Wander through Bilbao’s cobblestoned old quarter or take part in a pintxos (Basque tapas) cooking demonstration to discover the buzz around the city’s well-known cuisine. (B,L,D)

Explore both the French and Spanish Basque cultures today. Choose a market excursion in the village of Biarritz to get an introduction to French Basque culture, or journey to the French Basque countryside for a wine and pintxos tasting. In Spain’s Basque capital of San Sebastián, discover the connection to the Celts and hear the bouncing rhythms of a trikitixa, a traditional accordion. (B,L,D)

From the stunning symmetrical architecture of place de la Bourse to charming side streets brimming with cafés, Bordeaux has no shortage of nooks and crannies worth discovering. Today we arrive in this picturesque riverside city and have breakfast aboard before disembarking and departing for the airport for flights home. (B)

#301-308 — Cabins feature one or two portholes. Most cabins feature two single beds that can be converted to a queen. Cabins #301-306 feature one queen-sized bed. All cabins feature a writing desk, floor length mirror, reading lamps, well-appointed bathrooms with a roomy glass-wall shower, and a TV.

#317-320, 335-336 — Cabins feature two single beds (some can convert to a queen-sized bed), and one large window. They offer a writing desk, floor length mirror, reading lamps, sitting chair, well-appointed bathrooms with a roomy glass-wall shower, and a TV.

#313-316, 321-328, 337-350 — Cabins feature two single beds (some can convert to a queen-sized bed), one large window, and two sitting chairs and a small table and ample storage. They have a writing desk, floor length mirror, reading lamps, well-appointed bathrooms with a roomy glass-wall shower, and a TV. Cabins 341 & 343 have a sofa bed for a triple.

#215, 219, 230 — These large cabins with private balconies have two single beds that can convert to an Olympic-sized queen. They have seating areas with a sofa-bed and can be converted to triples. Cabins also include a desk with chairs, coffee table with sitting chair, and a small table. Bathrooms are generously sized with a roomy glass-walled shower stall and twin sinks.

National Geographic Explorer is a state-of-the-art expedition ship. It is a fully stabilized, ice-class vessel, enabling it to navigate polar passages while providing exceptional comfort. It carries kayaks and a fleet of Zodiac landing craft. An Undersea Specialist operates a remotely operated vehicle (ROV) and sophisticated video equipment, extending access to the underwater world.

Meals: Served in single seatings with unassigned tables for an informal atmosphere and easy mingling. Menu is international with local flair.

Cabins: All cabins face outside with windows or portholes, private facilities and climate controls. 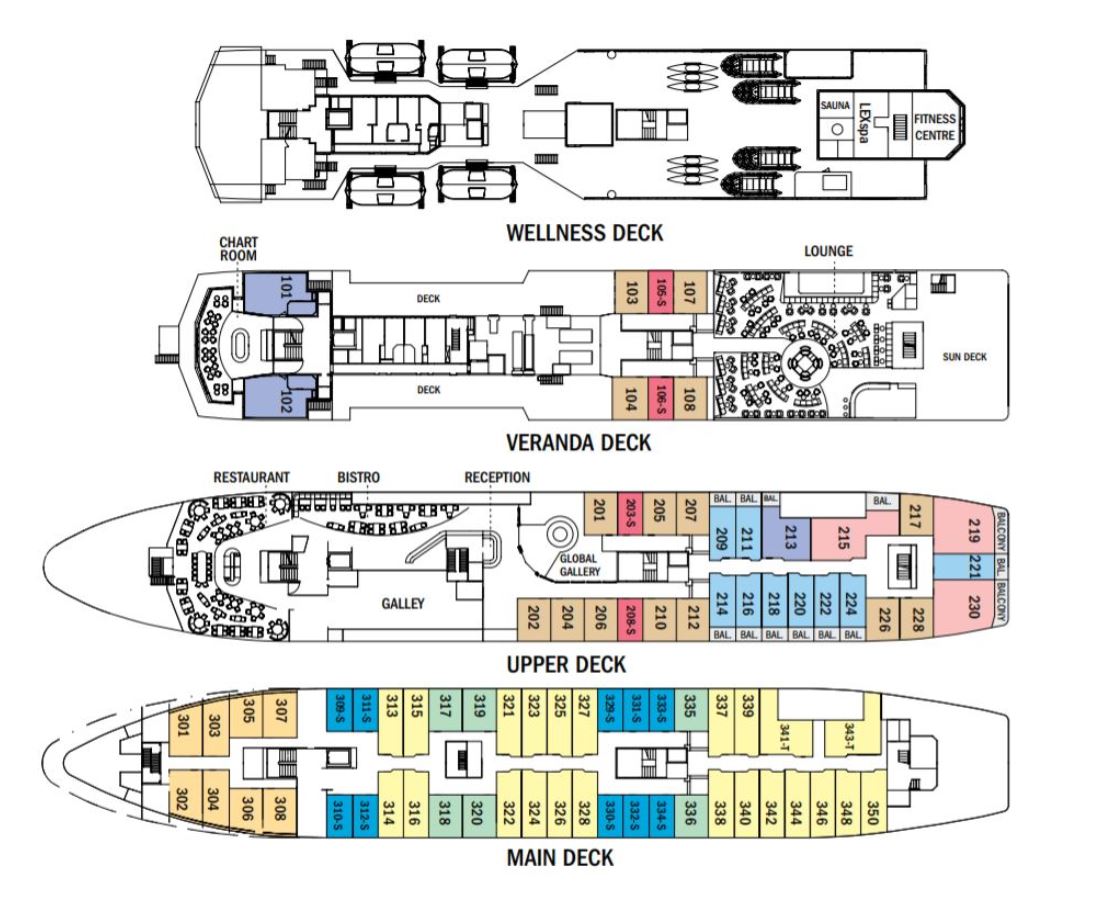 COMBINING OFFERS. Certain offers may be combinable, up to two savings opportunities, except where noted otherwise. For example, travel with a group of 8 or more on back-to-back expeditions, and take advantage of both savings.

TRAVELING AS A GROUP. Save 5% when traveling as a group of 8 or more people. Take advantage of these great savings, while enjoying traveling with your friends and family. This savings is applicable to voyage fares only, and is not valid on extensions or airfare. Deposit, final payments, and cancellation policies for group travel vary from our regular policies.

BACK-TO-BACK SAVINGS. Save 10% on any consecutive journeys taken on board one of our expedition ships. This savings is applicable on voyage fares only, and are not valid on extensions or airfare.

• Voyage on board in selected cabin category
• All meals while on board
• Non alcoholic beverages
• Experienced expedition team and leader
• All excursions
• Zodiac and kayak exploration
• Snorkeling, including wetsuits, masks, fins & snorkel where relevant
• Lectures and presentations on board 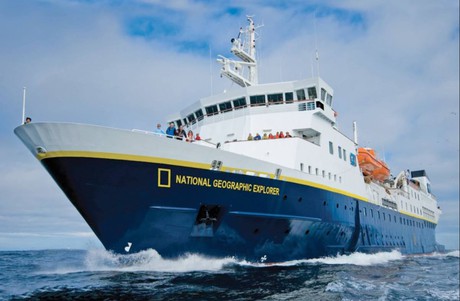 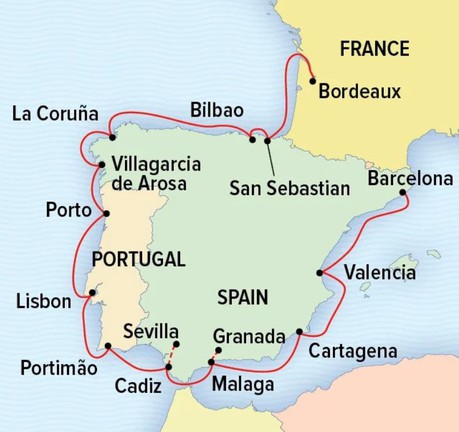