With the largest cabin space on the Ayeyarwady river,  Anawrahta offers the finest on-board experience in Myanmar. This impressive vessel is named after the founder of the Burmese nation, the modern day Myanmar. During his reign, from 1044-1077, he introduced and spread the religion of Theravada Buddhism throughout the land.

King Anawrahta was born in 1014. His mother was Myaunk Pyinthe and his father, King Kuhshaw Kyaunghpyu was once the ruler of Pagan. His father was overthrown by his stepbrothers, Kyiso and Sokkate. Anawrahta upon coming of age and learning the betrayal of his father, challenged Sokkate to a duel and won, bringing back the crown to their family.

King Anawrahta made Pagan the capital of Burma and described it as the “City of a thousand temples” because of the numerous structures, temples and pagodas built there. He also unified the country and introduced Theravada Buddhism, the oldest and most traditional form of the practice that focuses on the “Teachings of the Elders.”

Blending the purity and serenity of King Anawrahta’s Buddhist beliefs with the opulence of the British Empire, Anawrahta is the perfect vessel on which to explore Myanmar’s mighty Ayeyarwady River. Built to resemble a British colonial paddle steamer, the elegant 65-meter/ 214 feet long Anawrahta features three spacious decks and 23 luxurious cabins. With its gleaming white rails, polished lacquer, intricately carved woodwork and shining brass, Anawrahta takes guests back in time to an era of bygone elegance.

With polished wood floors, comfortable rattan chairs and traditional Burmese decorations, the 162-square meter/ 1,744-square feet Mandalay Lounge has the relaxed feel of a colonial club, at once exclusive and welcoming. Lean back against the burnt-orange cushions and enjoy a good book, or join friends for a nightcap in the lounge’s elegant and exotic ambiance. This elegant venue is located on the Upper Deck.

Inspired by the lavish decorations of old Bagan and Mandalay, Anawrahta’s Hintha Hall Restaurant evokes the elegant dining halls of yesteryear. White tablecloths and gleaming glassware are surrounded by polished wood, intricately-carved floor and ceiling panels and – last but not least – stunning views, framed by large picture windows. With seating for 48, the 141-square meter/ 1,518-square feet Hintha Hall lies on the Terrace Deck.

Local flavors. Fresh, diverse and delicious As well as offering international favourites, Anawrahta’s chefs take great pride in introducing their guests to the authentic flavours of Burma. Influenced by the cuisines of China, Thailand and India, Burmese food is as diverse as it is delectable. Thanks to its long coastline, seafood plays a prominent role, as do fresh herbs, aromatic spices and both highland and lowland vegetables. A typical Burmese meal involves steamed rice, a fish or meat curry and a light soup. Salads, known as a thoke, are plentiful, as are imaginative condiments. Last but not least, the nation’s Buddhist culture has given rise to mouth-watering vegetarian options. 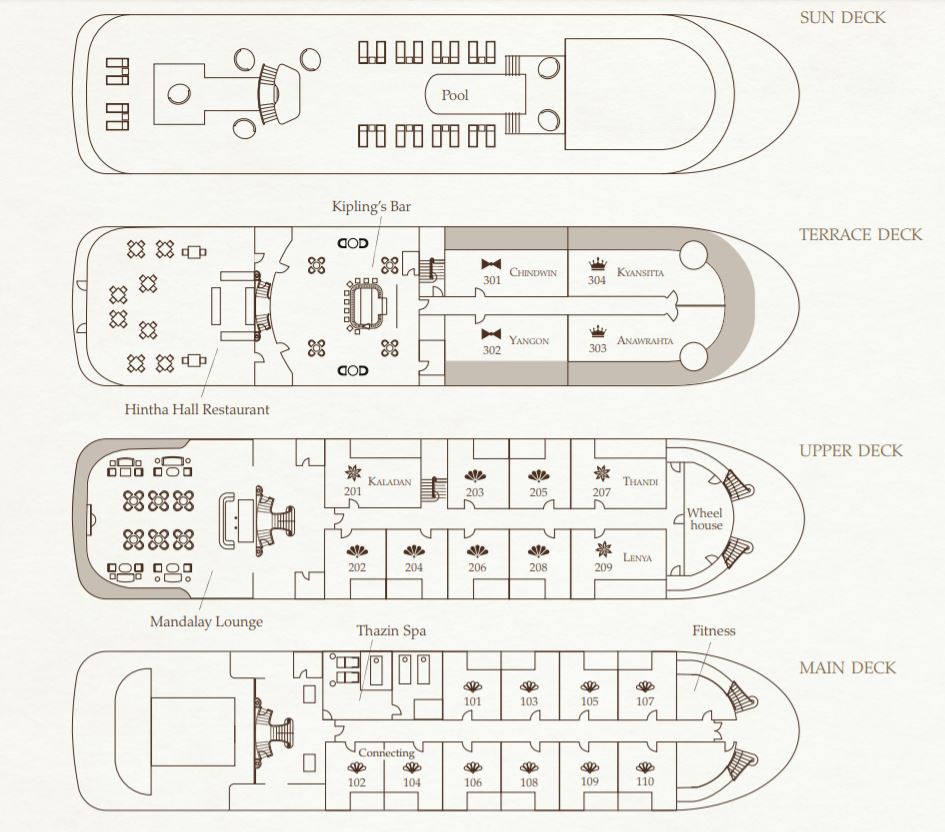